8 early takeaways from the Trump-Kim summit

Many questions remain after Tuesday’s historic meeting between President Donald Trump and North Korean leader Kim Jong Un. Will North Korea denuclearize? Will the two countries forge diplomatic ties? We don’t yet know exactly what the leaders discussed, so we asked foreign policy experts for their early takeaways on the summit.

“We’ve never seen a North Korean leader submit himself to the press.”

The handshake proves both sides are willing to “readjust the trajectory of the U.S.-North Korea relationship from one hurtling toward inevitable military confrontation” and instead work toward some common goals, “probably denuclearization for peace,” said Scott Snyder, senior fellow for Korean studies at the Council on Foreign Relations. It remains to be seen how far down the road of denuclearization both countries can go, he said, “but the other requirement of the meeting is to start a serious process toward those objectives by narrowing the gap on the pace, price, and process by which denuclearization and normal relations between the two countries will occur.”

The fact that Kim was granted a meeting “without having to do anything on the denuclearization front in advance” shows that legitimacy extends to North Korea’s nuclear status, said Jenny Town, a research analyst at the Stimson Center and managing editor of 38 North. Kim’s meetings with Chinese President Xi Jinping, now President Trump and soon Russian President Vladimir Putin reinforce Kim’s own perception of being at strategic parity with the big powers, she said. “And on some level, his weapons of mass destruction programs are at a level, which make that perception somewhat true.” 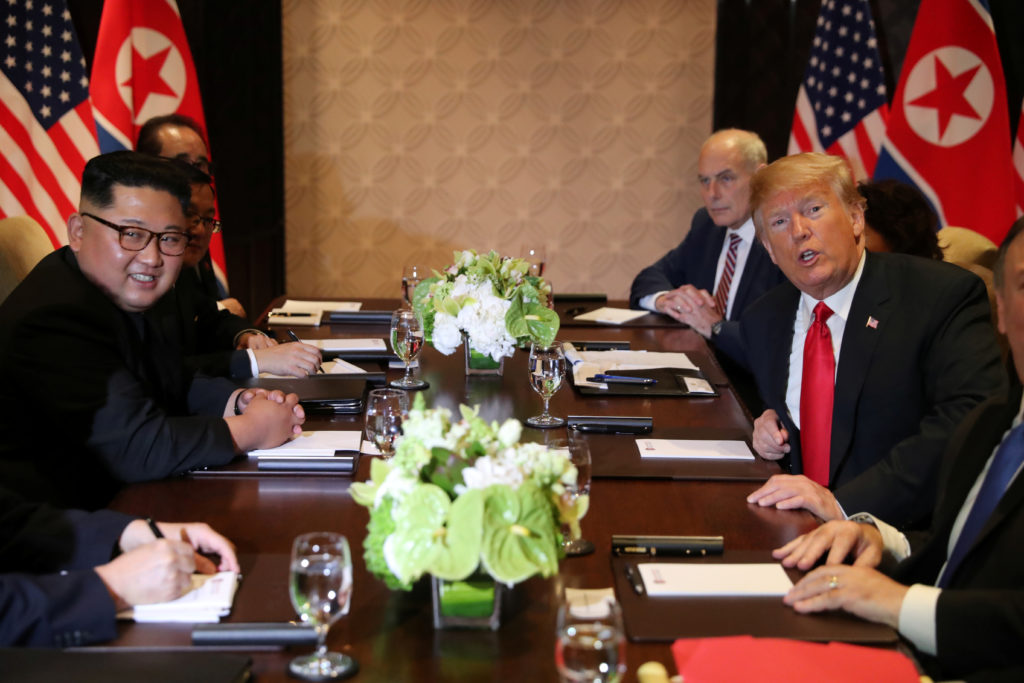 Even if this is considered a success, we won’t know how far the North Koreans will go when it comes to denuclearization, Schifrin said, quoting a senior administration official. “This is really just a getting-to-know-you meeting,” Schifrin said. “They are trying to lower expectations dramatically compared to where they were a few months ago.”

But the risks are also high that “the situation could deteriorate as quickly as it has improved,” Town said. “The question is whether Trump’s unconventional approach to North Korea will bring about results that have been elusive to the traditional diplomatic approach. The opportunity is there to create a top-down approach that could get us farther in a process than we’ve gotten before.”

The risks are also high that “the situation could deteriorate as quickly as it has improved.”

The best one can hope for is “talks for the sake of talks, and further rounds of follow-up negotiations,” said Sung-Yoon Lee, professor of Korean studies at the Fletcher School at Tufts University. “Trump may well shock the world by announcing a phased withdrawal of [U.S. troops from South Korea] and the forging of a peace treaty with the North,” Lee said, adding that Trump would “calculate this a brilliant move, one that puts pressure on both Seoul and Pyongyang simultaneously. To the ally: ‘You cozy up to the North and refuse to put down more money to cover the costs of stationing [the troops in Korea], you’re on your own. We may abandon you.’ And to the North: ‘By removing our troops from harm’s way, your artillery range, we may be more prone to striking first. Watch out.’”

The body language in the room while the two of them spoke was “not effusive, but certainly cordial,” Schifrin said. How long this meeting lasts will perhaps be the sign of how well it’s going, he said. “At the end of the day, President Trump has said that he will decide based on how he feels about Kim. And Kim will decide too how far he is willing to go.”

“It is amazing really, how [Kim] has gone from years of being one of the most hated, vilified world leaders to this political superstar in less than six months,” Town said.