MOSCOW — Police in Moscow cracked down hard on an unsanctioned election protest for the second weekend in a row Saturday, detaining more than 800 people at a rally against the exclusion from city council contests of some independent and opposition candidates, an arrest monitoring group said.

Election officials rejected signatures several candidates needed to qualify for next month’s local ballot. The decision tapped dissatisfaction with a political environment dominated by the Kremlin-aligned United Russia party, in which dissenting voices are marginalized, ignored or repressed.

The OVD-Info organization, which tracks arrests in Russia, said 828 people were detained Saturday.

The Russian Interior Ministry said the number was about 600 in a crowd of about 1,500 protesters, although police are widely believed to understate crowd estimates for opposition events. 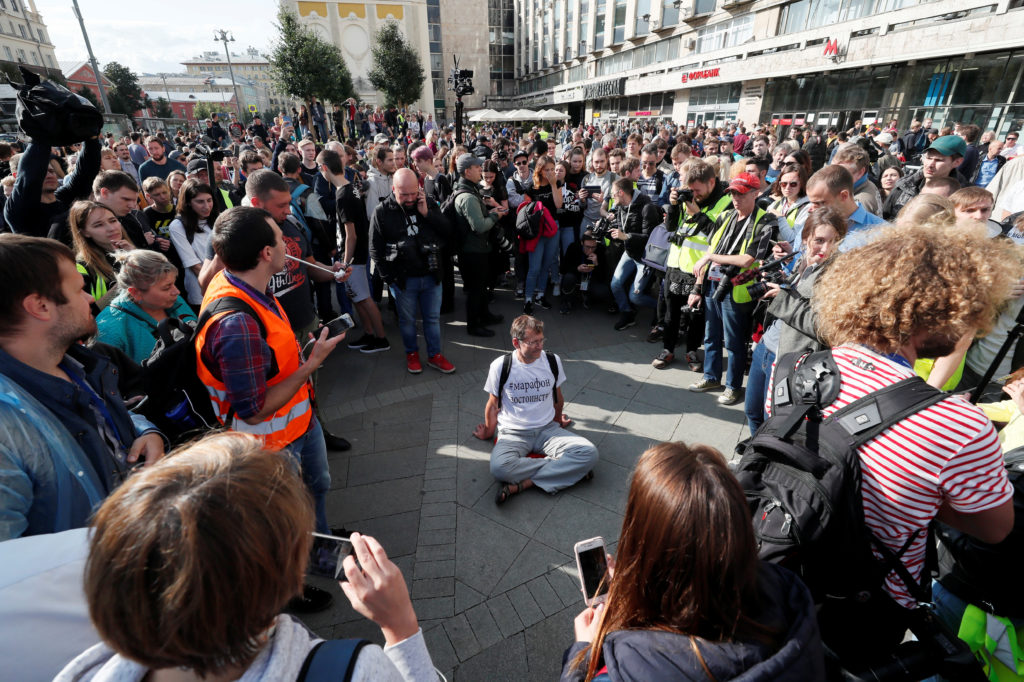 People take part in a rally calling for opposition candidates to be registered for elections to Moscow City Duma, the capital’s regional parliament, in Moscow, Russia August 3, 2019. Photo by Shamil Zhumatov/Reuters

The detentions came a week after authorities arrested nearly 1,400 people at a similar protest.

Lyubov Sobol, one of the excluded candidates and a driving figure of the current wave of protests, was among those detained. She was grabbed by police in central Moscow and hustled into a police van, loudly demanding to know why she was being held.

Demonstrators were aiming to hold a march along the Boulevard Ring, which skirts central Moscow and is a popular locale for people to walk around, despite repeated warnings that police would take active measures against a protest.

Helmeted riot police lined the route and started seizing demonstrators from a scattered cluster on Pushkin Square and pushing them back from another square further along the route.

Some of the detentions were harsh, including one young bicyclist who was beaten with truncheons as he lay on the pavement still straddling his bike. Some other detainees appeared nonchalant, smirking or checking their phones as police led them to buses.

The demonstrations dissipated after about four hours as a steady, cold rain began falling. 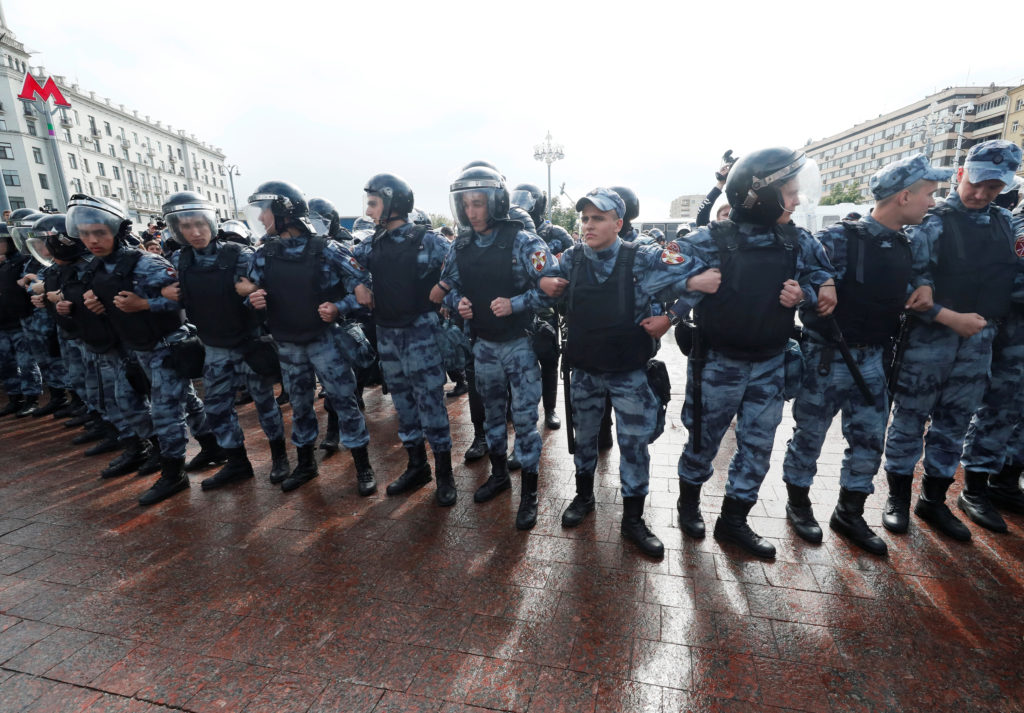 Law enforcement officers block a street in a rally calling for opposition candidates to be registered for elections to Moscow City Duma, the capital’s regional parliament, in Moscow, Russia August 3, 2019. Photo by Shamil Zhumatov/Reuters

Once a local, low-key affair, the September vote for Moscow’s city council is now emblematic of the division within Russian politics and the Kremlin’s ongoing struggles with how to deal with strongly opposing views in its sprawling capital of 12.6 million people.

In the past month, the issue has provoked a surprisingly large outcry for a local election. On July 20, about 20,000 people turned out for a demonstration that was the largest in the city in several years.

On Saturday, about 2,000 people attended another rally in St. Petersburg supporting the Moscow protests, the local news site Fontanka.ru reported.

The Moscow city council, which has 45 seats, is responsible for a large municipal budget and is now controlled by the pro-Kremlin United Russia party. All of its seats, which have a five-year-term, are up for grabs in the Sept. 8 vote.

Also Saturday, Russia’s Investigative Committee announced it was opening a criminal case against the Foundation for Fighting Corruption, headed by the Kremlin’s most prominent foe Alexei Navalny. The committee said the organization was suspected of receiving funding that had been criminally acquired.

Navalny is serving 30 days in jail for calling last week’s protest. The head of the foundation also is jail in connection with that protest.

Left: Law enforcement officers detain a participant in a rally calling for opposition candidates to be registered for elections to Moscow City Duma, the capital's regional parliament, in Moscow, Russia August 3, 2019. Photo by Shamil Zhumatov/Reuters