ARSAL, Lebanon — Hundreds of displaced Syrians left Lebanon for their war-torn homeland Thursday in a repatriation that will reunite them with relatives they have not seen for years. But many of them also are leaving behind loved ones who are staying in the tiny Arab nation that has become home to the highest percentage of refugees in the world.

Mohammed Suleiman Darwish, 76, was among those who left this border town for Syria with his 9-year-old granddaughter, Israa, who has not seen her parents since 2013 and will meet younger siblings who were born at home while she sought safety in Lebanon.

Darwish and his granddaughter were among a batch of about 300 Syrians crammed into trucks, tractors and other vehicles piled with mattresses and blankets. They began crossing the border for an uncertain future.

When Syrian government forces and their allies launched a wide offensive on Syria’s Qalamoun region in 2013, young Israa was staying with her paternal grandparents, who decided to take her with them to Lebanon. Israa’s parents were in the same village of Suhul but stayed at home as Syrian troops marched in.

Now Darwish and Israa are heading back to Suhul.

But he is leaving his 63-year-old wife, Baseema, in Lebanon while he repairs their badly damaged home before she can rejoin him. She will stay in Lebanon with her other son and his family.

“I missed my parents a lot when I lived here,” said Israa, who wore blue jeans, a white-and-blue sweater and flip-flops as she sat on the ground next to her grandparents before heading to Syria. “I spoke with them regularly by telephone, but now I even forgot how they look.”

When Israa left Syria in 2013, her younger sister, Aya, was 2. Since then, two other sisters and a brother, Youssef, were born, she said.

“I want to see them today,” said the green-eyed girl who seemed excited about the trip.

Darwish’s wife said her other son has a job in Lebanon.

“I hope that the war that splits us ends, and we can all gather again in Syria,” she said as she put her 9-month-old granddaughter Fatima in her lap. 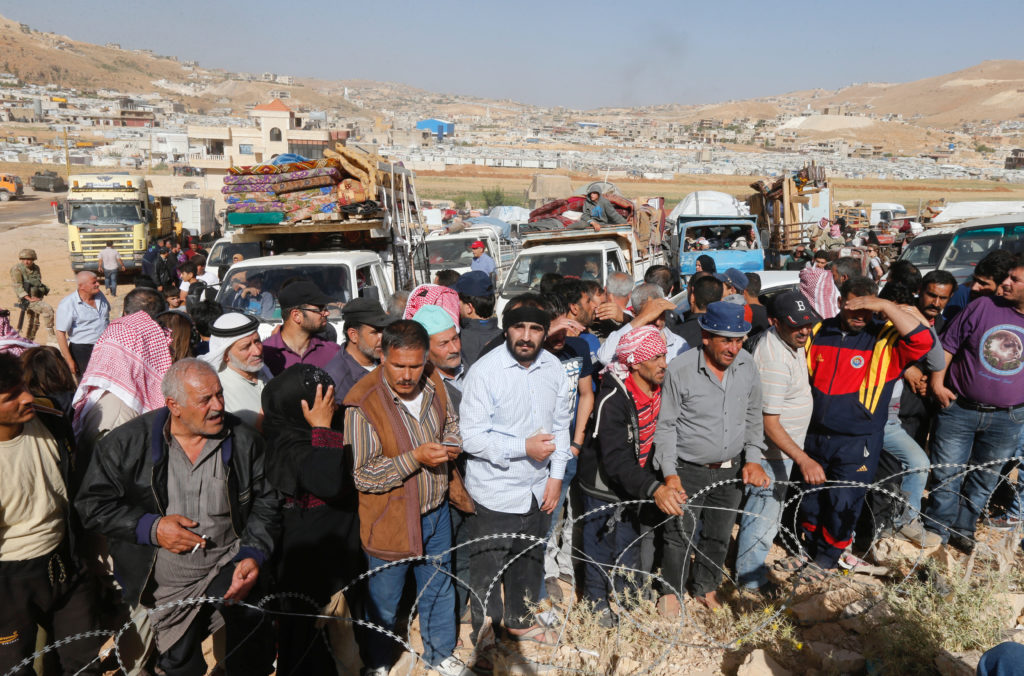 Syrian refugees prepare to return to Syria from the Lebanese border town of Arsal, Lebanon. Photo by Mohamed Azakir/Reuters

The small exodus is part of a repatriation program that the Lebanese government says is voluntary — the first batch of refugees to return to Syria from the border town of Arsal this year.

Khaled Abdul-Aziz, a Syrian who heads a committee for the returnees, said 472 Syrians were expected to make the crossing Thursday after requesting permission from the Lebanese and Syrian governments. They are part of a total of 3,194 Syrians who have registered to return, he said, adding that the rest will head back in batches in the coming weeks.

The General Security Directorate, which is in charge of foreigners in Lebanon, said in a statement later Thursday that 294 Syrians had headed back. It did not give an explanation but apparently not all those who were registered had departed.

The repatriations come amid a dispute between the government of Lebanon and the U.N.’s refugee agency, which Beirut accuses of trying to discourage refugees from going home. UNHCR rejects the charges.

Lebanon hosts around 1 million registered Syrians — roughly a quarter of Lebanon’s population — and officials have said that the country can no longer afford the strain on its fragile economy.

U.N. officials and rights groups have expressed concern over the organized repatriations, calling them premature as violence and a government crackdown continue in Syria.

Lama Fakih, deputy director of the Middle East region for Human Rights Watch, said Syrians are often driven to leave by “oppressive” living conditions in Lebanon, including a lack of housing, restrictions on their movement and inability to enroll children in school.

In Arsal, the refugees gathered in the town’s Wadi Hmeid area, where a Lebanese security officer checked their IDs against a list before allowing them to cross into Syria.

Most are farmers and their families, and some of them rode pickup trucks and tractors.

The Syrian army, backed by its allies Russia and Iran, has regained more territory from the rebels, Lebanon’s government has argued that many areas in Syria have become stable enough for refugees to return.

But the U.N. is more cautious, saying Syria is not yet safe.

Lebanon’s general security chief Abbas Ibrahim said Wednesday the UNHCR has been notified about the return of the Syrians “so they can bear their responsibility.”

But Lisa Abou Khaled, a spokeswoman for UNHCR in Beirut, said the agency is not organizing the returns. She said the agency’s representatives are only present at the border crossings to answer questions. She confirmed that authorities informed them of the repatriations.

“UNHCR, as in previous movements … will be present at the departure point to attend to any query or any needs the refugees may have as they prepare to leave to Syria,” she said.

Human Rights Watch’s Fakih said research on Syrians in Arsal revealed “oppressive conditions” that led many to return. A similar convoy left Arsal last year for areas held by insurgents in Syria. It was not immediately clear what happened to those who returned.

Arsal Mayor Basil al-Hujeiry said more than 3,000 Syrians have registered to return home from the border town. Syria has asked that the repatriations take place in phases, he added.

Some young men have said they don’t want to return to Syria for fear of being drafted into the military. Those going back Thursday said they were promised they won’t be drafted for six months after their return.

“I am really scared about being drafted to the army, but the situation in Syria now is more safe,” said Salah-Eddine Abdul-Aziz, 26, who is heading to his hometown of Fleeta with his wife and son. “All I want is to return to Syria and not leave it again. Enough of being a refugee.”

Left: A child looks out of a window as Syrian refugees prepare to return to Syria from the Lebanese border town of Arsal, Lebanon. Photo by Mohamed Azakir/Reuters