As French President François Hollande tightened security across France, promising “merciless” retribution for the series of coordinated terror attacks in Paris Friday night, world leaders reacted with expressions of solidarity as well as increased vigilance in their own countries.

In response to the attacks, which the president called an “act of war” by Islamic State militants, Hollande announced three national days of mourning and bolstered security across the country, including a nationwide state of emergency — France’s first since World War II — and temporary border controls.

Many Parisian businesses were closed Saturday, and the city government announced that its facilities, including schools, museums, libraries and food markets would be closed for the weekend.

Speaking from the White House Friday night, President Barack Obama expressed solidarity with the French people and described the acts of terror as an assault on humanity.

The president also pledged support for the French government and emphasized the bonds of common history that the United States shares with France.

“We stand prepared and ready to provide whatever assistance that the government and the people of France need to respond,” he said. “France is our oldest ally. The French people have stood shoulder to shoulder with the United States time and again. And we want to be very clear that we stand together with them in the fight against terrorism and extremism.”

American authorities have said that there is no known domestic threat related to the Paris attacks, but officials across the country are taking precautionary measures.

In a conversation with reporters on Friday night, New York City Mayor Bill de Blasio said that he had been briefed on the attacks and that, while there were no specific threats against the city, the New York Police Department would bolster security.

“NYPD is of course ready, has already deployed resources to protect the French Mission to the U.N. here in New York City, and the French Consulate, and will be focusing on other sites related to France to make sure they are safe. We have our Critical Response Vehicles on high alert right now to be able to move wherever we need them,” he said. 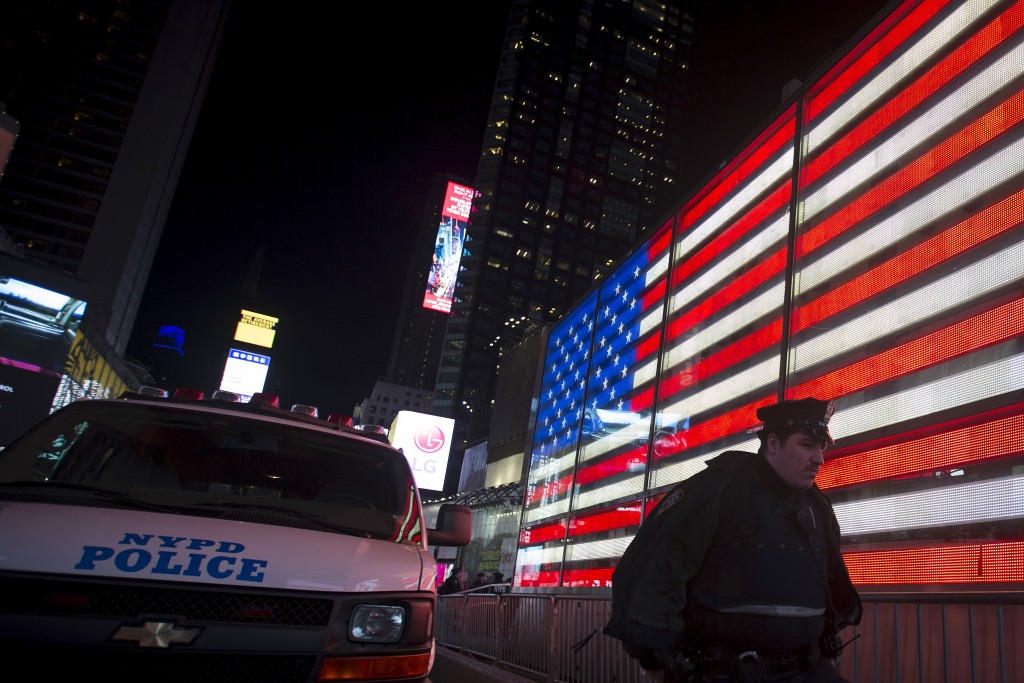 A New York City police officer walks from a van that was sent to Times Square to boost security Friday night, Manhattan, November 13, 2015. New York, Boston and other U.S. cities bolstered security on Friday night as a precautionary response to the Paris attacks. Photo by Carlo Allegri/Reuters

Philadelphia Police Commissioner Charles Ramsey said Friday evening that he had ordered extra patrols to city transportation centers and other potential targets, and that officials would upgrade security at Sunday’s football game between the Philadelphia Eagles and the Miami Dolphins, USA Today reported.

“Obviously, one of the targets in Paris was a sports stadium,” Ramsey said, referring to a series of explosions outside a sold-out exhibition soccer match. “We’re not taking any chances.”

France’s European neighbors, including Italy, the Netherlands and the U.K., also boosted security at the borders and other critical locations.

British Prime Minister David Cameron called what happened in Paris “a horrifying and sickening attack” and cautioned the British people against an attack at home.

“Today the British and French people stand together, as we have so often before in our history when confronted by evil, shocked but resolute, in sorrow, but unbowed,” Cameron said in an address. “The threat level is already at severe, which means an attack is highly likely, and will remain so, and we must recognize that however strong we are, however much we prepare, we in the U.K. face the same threat.”

In addition to official statements of sympathy and condolence from governments around the world, iconic monuments in many countries were lit up with the French Tricolour flag in a display of unity with the French people, including Australia’s Sydney Opera House, the Brandenburg gate in Berlin, Germany, and the statue of Christ the Redeemer in Rio de Janeiro, Brazil.

Left: A couple stands in the rain as the colors of the French flag are projected onto Sydney's Opera House in Australia, November 14, 2015. Countries around the world used similar displays to show solidarity with France following a series of terrorist attacks in Paris Friday night. Photo by Jason Reed/Reuters