Iran’s Guard says ready for ‘any scenario’ amid U.S. standoff

TEHRAN, Iran — Iran’s powerful Revolutionary Guard is ready for combat and “any scenario,” its chief commander said Saturday, as the country’s nuclear deal with world powers collapses and the U.S. alleged Iran was behind a weekend attack on major oil sites in Saudi Arabia that shook global energy markets.

Iran has denied involvement in the Sept. 14 attack that was initially claimed by Yemen’s Iranian-backed Houthi rebels. Iranian Foreign Minister Mohammad Javad Zarif, who is in New York for the U.N. meetings, has warned that any retaliatory strike on Iran by the U.S. or Saudi Arabia will result in “an all-out war.”

On Saturday, Gen. Hossein Salami, at a ceremony displaying pieces of an American drone Iran shot down in June, said that his forces have carried out “war exercises and are ready for any scenario.”

He added: “If anyone crosses our borders, we will hit them.”

Zarif claimed in a tweet that Saudi Arabia does not believe its own allegations that Iran was responsible for the attack on Saudi oil sites.

“It is clear that even the Saudis themselves don’t believe the fiction of Iranian involvement”, Zarif said, pointing to what he described as a Saudi retaliatory attack on Houthi forces in southwestern Yemen. 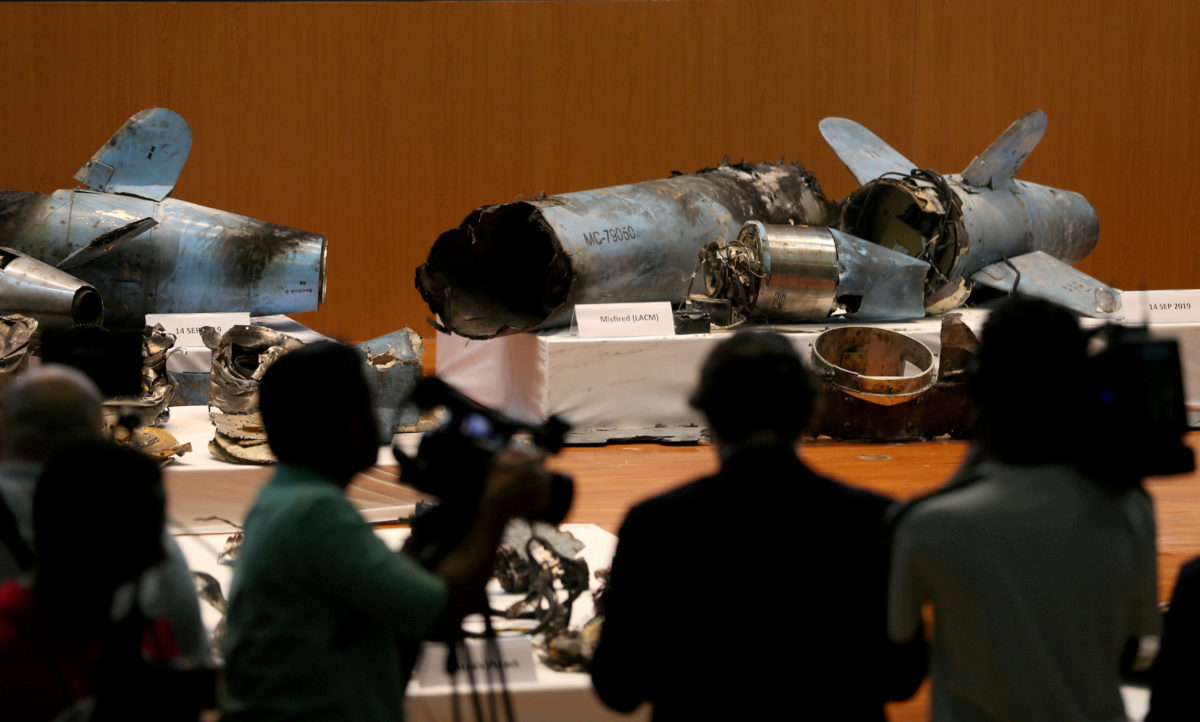 Remains of the missiles which Saudi government says were used to attack an Aramco oil facility are displayed during a news conference in Riyadh, Saudi Arabia September 18, 2019. Photo by Hamad I Mohammed/Reuters.

Saudi Arabia has been at war with the Houthi rebels since March 2015. The U.N., Gulf Arab nations and the U.S. accuse Iran of supplying arms to the Houthis, something Tehran denies.

Analysts say the missiles used in the Sept. 14 assault wouldn’t have enough range to reach the oil sites in eastern Saudi Arabia from impoverished Yemen. The missiles and drones used resembled Iranian-made weapons, although analysts say more study is needed to definitively link them to Iran.

Salami added that Iran does not want to start a conflict, but appeared to warn the U.S. and Saudi Arabia that Iran is prepared.

“We won’t stop until the destruction of any aggressor. And we will not leave any secure spot,” he said. “Do not miscalculate and do not make a mistake.”

President Donald Trump signaled on Friday that he was not inclined to authorize an immediate military strike on Iran in response to the attacks on the Saudi oil industry, saying he believes showing restraint “shows far more strength” and he wants to avoid an all-out war.

The Pentagon said the U.S. will deploy additional troops and military equipment to Saudi Arabia and the United Arab Emirates to beef up security.

Trump, who withdrew the U.S. from the nuclear deal more than a year ago, said separately Friday that America “just sanctioned the Iranian national bank.” He did not elaborate.

The U.S. Treasury Department said it took action against the Central Bank of Iran.

Left: Iranian Revolutionary Guards commander Major General Hossein Salami at Tehran's Islamic Revolution and Holy Defence museum during the unveiling of an exhibition of what Iran says are US and other drones captured in its territory, in the capital Tehran on September 21, 2019. - Iran's Revolutionary Guards commander today warned any country that attacks the Islamic republic will see its territory become the "main battlefield" as he opened an exhibition of captured drones. Photo by Atta Kenare/AFP/Getty Images.