JERUSALEM — Israeli troops raided a Palestinian village on Thursday and the military said it was sending reinforcements to the West Bank, hours after the body of a 19-year-old soldier with stab wounds was found near a Jewish settlement.

Prime Minister Benjamin Netanyahu denounced the killing as a terror attack and vowed the killers would be brought to justice.

The killing threatened to inflame tensions between Israelis and Palestinians just over a month before Israel’s parliament elections. In response to the incident, Netanyahu’s nationalist allies called for further West Bank settlement construction and a heavy handed response.

The soldier was identified as 19-year-old Dvir Sorek, from the West Bank settlement of Ofra, north of Jerusalem. He was a student at a pre-military Jewish seminary in the Gush Etzion settlement bloc, south of Jerusalem. His body was found on the side of a road near the seminary.

Army spokesman Lt. Col. Jonathan Conricus said that the soldier was neither armed nor in uniform when his body was found. He said the military was investigating the circumstances of his death and searching for suspects.

As part of the searches, a column of Israeli jeeps entered the nearby Palestinian village of Beit Fajar, a mile south of where the body was found. Soldiers blocked the road and searched homes.

The military said it was calling up more troops to the West Bank in response to the incident.

There was no immediate claim of responsibility, but the Islamic militant group Hamas issued a statement praising the killing of the soldier. 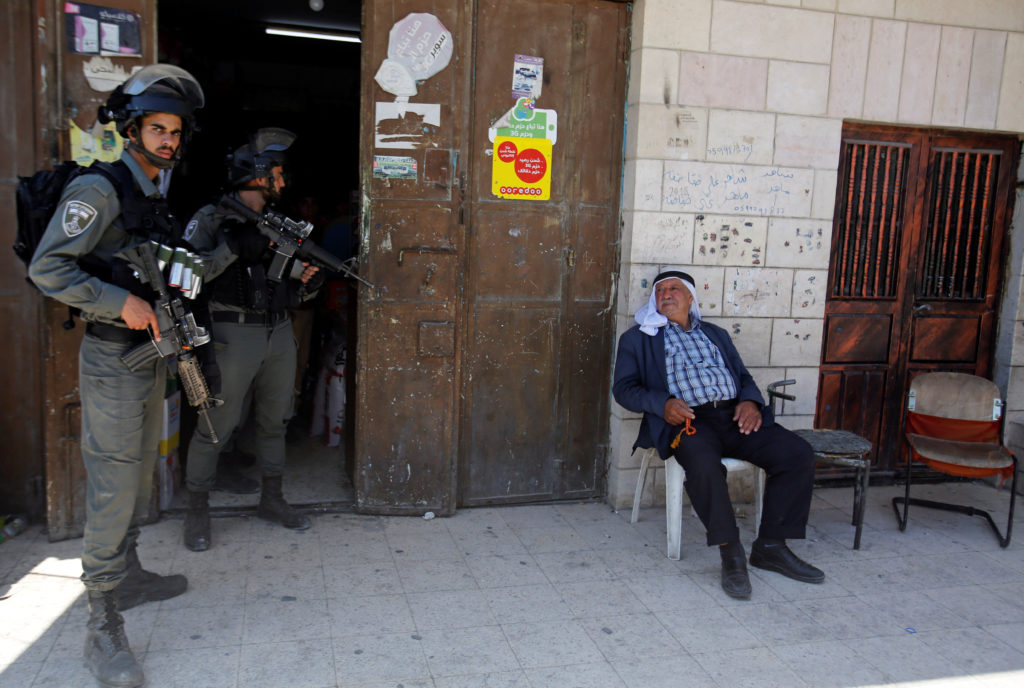 A Palestinian man looks on as Israeli forces stand guard during a raid after the Israeli military said an Israeli soldier was found stabbed to death near a Jewish settlement, in Beit Fajjar in the Israeli-occupied West Bank August 8, 2019. Photo by REUTERS/Mussa Qawasma

“We salute the hero fighters, sons of our people, who carried out the heroic operation which killed a soldier of the occupation army,” Hamas said in a statement. The Palestinian militant group Islamic Jihad also hailed the killing as “heroic and bold.”

Rabbi Shlomo Wilk, head of Sorek’s yeshiva, told Israel Radio that the student had gone to Jerusalem to buy presents for the school’s faculty. Wilk said Sorek had called a friend and said he would return on time.

“When he was late, we started to worry,” Wilk said. “Fairly quickly we understood that something wasn’t right and we got the police involved.”

Sorek’s father, Yoav, is the editor of a Hebrew language Jewish history magazine and the Shiloach Journal of for Policy and Thought.

Dvir was the grandson of a prominent religious nationalist rabbi, Benjamin Herling, one of the forerunners of the settlement movement, who was killed by a Palestinian gunman near the West Bank city of Nablus in 2000.

Netanyahu visited the scene of the attack Thursday evening. Earlier, the prime minister said in a statement that security forces were “in pursuit now in order to capture the despicable terrorist and bring him to account.”

Speaking at the inauguration of new settlement homes in Beit El, north of Jerusalem, Netanyahu said Israel “will reach those who seek to harm us, we will strengthen our roots in our homeland.”

President Reuven Rivlin offered his condolences and said the security forces were “pursuing the murderers and will not rest until we find them.”

“Our prayers this morning are with the family of the murdered soldier and our hearts grieve for the life cut short,” Rivlin said. “We fight terrorism without compromise to ensure the security of our people.”

Israel captured the West Bank, along with east Jerusalem and the Gaza Strip, in the 1967 Mideast war.

The Palestinians seek the territories as part of a future state, with the occupied West Bank as the centerpiece and east Jerusalem as a capital.

Most of the international community considers Israel’s West Bank settlements illegal and an obstacle to creating a two-state solution for the Israeli-Palestinian conflict. Israel considers the territories “disputed,” and says the fate of the settlements should be determined through negotiations, which have been moribund for years.

The body of the soldier was found in the same region as the kidnapping and killing of three Israeli teenagers by Palestinian militants in the summer of 2014, an incident that helped precipitate a war between Israel and Hamas in the Gaza Strip.

Left: A Palestinian boy rides a bicycle past an Israeli border policeman during a raid after the Israeli military said an Israeli soldier was found stabbed to death near a Jewish settlement, in Beit Fajjar in the Israeli-occupied West Bank August 8, 2019. Photo by REUTERS/Mussa Qawasma

How the Cayman Islands could become a new health care destination