BARCELONA, Spain — Shrieks of joy rang out Sunday in the streets of Spain as children were allowed to leave their homes for the first time in six weeks, while people in Italy and France were eager to hear their leaders’ plans for easing some of the world’s strictest coronavirus lockdowns.

The sound of children shouting and the rattle of bikes on the pavement after the 44-day seclusion of Spain’s youngest citizens offered a first taste of a gradual return to normal life in the country that has the second-highest number of confirmed infections behind the United States.

“This is wonderful! I can’t believe it has been six weeks,” Susana Sabaté, a mother of 3-year-old twin boys, said in Barcelona. “My boys are very active. Today when they saw the front door and we gave them their scooters, they were thrilled.”

Wary of igniting new infection flare-ups, nations have been taking divergent paths on when to reopen their economies after weeks at a standstill under coronavirus lockdowns.

Deaths officially linked to the virus topped 200,000 globally amid 2.9 million reported infections, according to a tally by Johns Hopkins University. Those figures understate the true toll of the pandemic, due to limited testing, problems in counting the dead and some governments’ moves to underplay their outbreaks.

Two weeks after being discharged from a London hospital, British Prime Minister Boris Johnson — the only major world leader so far to fall ill with COVID-19 — will return to work on Monday.

Spain, Italy and France, which have Europe’s highest death tolls from the virus, all imposed tough lockdown rules in March. All have reported significant progress in bringing down infection rates and are ready — warily — to start giving citizens more freedom.

“Maximum caution will be our guideline for the rollback,” Spanish Prime Minister Sánchez said as he announced that Spaniards will be allowed to leave their homes for short walks and exercise starting May 2. “We must be very prudent, because there is no manual, no road map, to follow.”

So far, Spanish adults were allowed out only for essential shopping or to go to work. Children under 14 have been in complete seclusion, but as of Sunday morning they were allowed to take walks with one parent for up an hour. 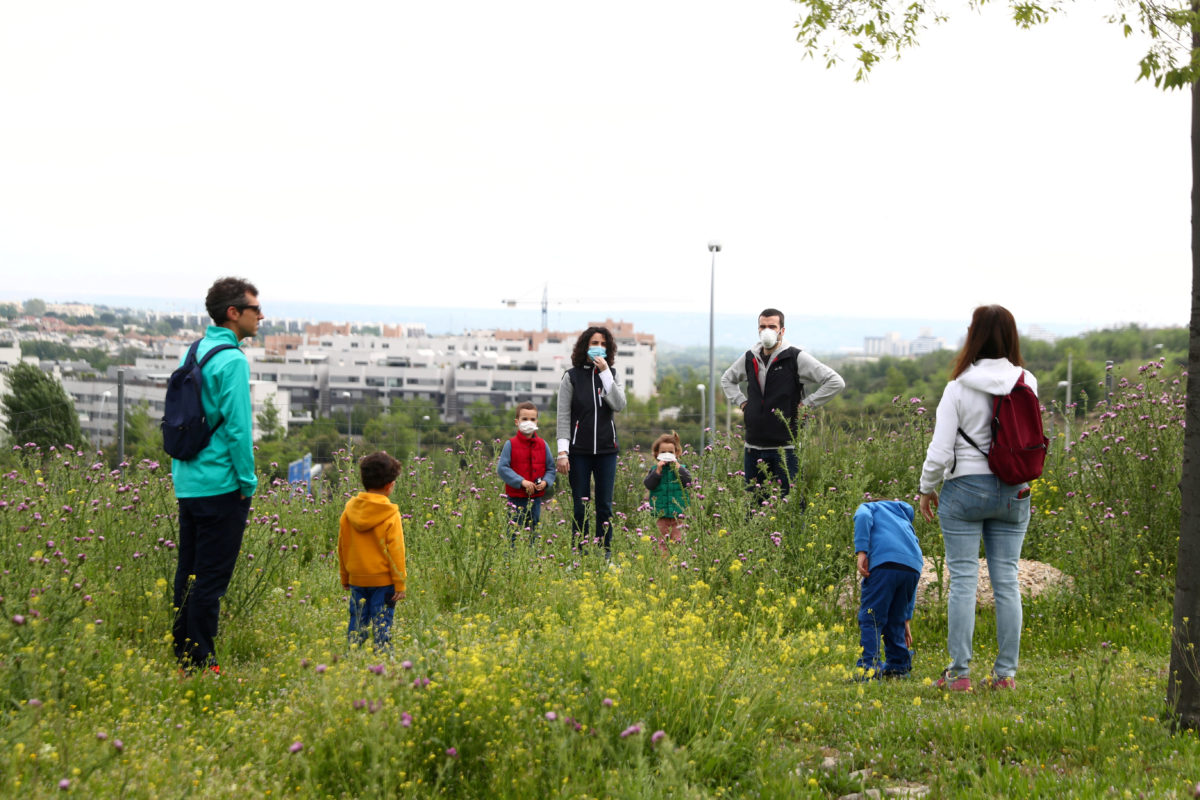 Miriam del Peso, her husband Alejandro and their children Pablo and Sofia keep social distancing as they interact with another family after restrictions were partially lifted for children for the first time in six weeks, during the coronavirus disease (COVID-19) outbreak in Madrid, Spain, April 26, 2020. Photo by Sergio Perez/Reuters.

Those weren’t the only restrictions. Spanish youngsters must stay within 1 kilometer (0.6 miles) of their homes, take only one toy out and can’t play with other kids.

In Barcelona, Sabaté’s sons wore child-size face masks as they went out. “Now we will see how long they stay on!” she said.

Sánchez will present a detailed plan Tuesday for the “de-escalation” of Spain’s lockdown.

In France, Prime Minister Edouard Philippe said he will unveil a “national deconfinement strategy” on Tuesday. That follows weeks of work by experts seeking a balance between restarting the eurozone’s second-largest economy and preventing a second wave of infections that could overwhelm France’s intensive care units.

French President Emmanuel Macron had already announced that France’s lockdown would start to be lifted on May 11. Philippe’s speech will flesh out the details covering health, school, work, shops, transport and gatherings. The lockdown has been raising tensions in France’s poorest areas.

Italian Premier Giuseppe Conte is expected to announce more details easing the lockdown in the coming days for the first European country to see a large-scale coronavirus outbreak. Conte said priorities include restarting construction projects and export industries so businesses won’t “risk being cut out” of markets. He confirmed that school classes won’t begin until September.

Britain, which has joined Italy, Spain and France in recording over 20,000 virus-related deaths, imposed a less harsh shutdown in March. Johnson returns to work amid calls for more clarity on when his government will ease the lockdown now set to run until at least May 7. The British government is also facing criticism over limited testing and a lack of protective gear for medical workers.

Other European nations are already further along in easing lockdowns. Germany allowed nonessential shops and other facilities to open last week and Denmark has reopened schools for children up to fifth grade.

Germany’s restaurants and tourism industry are among those still awaiting word on a way forward in Europe’s largest economy, but Chancellor Angela Merkel has indicated major decisions won’t come before May 6.

Germany’s top diplomat said Europe must move “as quickly as possible, but as responsibly as necessary” to restore freedom to travel.

“A European race to be the first to allow tourist trips again would lead to unacceptable risks,” Foreign Minister Heiko Maas told the Bild am Sonntag newspaper. “We have already seen what a cluster of infections in a popular holiday area can do in the tourists’ home countries.”

That was an apparent reference to ski resorts such as Ischgl in Austria, where dozens of tourists were infected and carried the virus as far away as Iceland and Norway.

Governments around the world spent weeks flying home citizens stranded by coronavirus lockdowns, but 25 Dutch high school students managed to find a different way home: sailing across the Atlantic Ocean after being stranded in the Caribbean.

Instead of flying back from Cuba, the crew and students stocked up on supplies and warm clothes and set out aboard a sailing schooner, arriving Sunday in the Dutch port of Harlingen, a five-week voyage.

The U.S. has the world’s highest coronavirus toll, with nearly 54,000 confirmed fatalities and around 940,000 infections reported so far but there are wide regional variations across the country. While some U.S. states are easing restrictions, Hawaii extended its stay-at-home order until the end of May.

New York, the epicenter of the U.S. outbreak, is keeping restrictions on until May 15 but Georgia and Oklahoma have allowed salons, spas and barbershops to reopen. Alaska cleared the way for restaurants to resume dine-in service and for retail shops and other businesses to open, all with limitations.

In Asia, India allowed neighborhood stores to reopen this weekend, though not in the hardest-hit places.

The Chinese city of of Wuhan, where the pandemic began late last year, said all major construction projects have resumed as authorities push to restart factory production and other economic activity after a 2 1/2-month lockdown.

South Korea, which has relaxed some social distancing rules, saw a ninth straight day with fewer than 20 new cases, but the city-state of Singapore reported 931 new cases as it battled an outbreak among foreign workers living in crowded dormitories.

Geir Moulson reported from Berlin. Associated Press journalists around the world contributed to this report.

Left: Child and relatives walk by a pathway, after restrictions were partially lifted for children for the first time in six weeks, following the coronavirus disease (COVID-19) outbreak in El Masnou, north to Barcelona, Spain, April 26, 2020. Photo by Albert Gea/Reuters.