PARIS — Traveling from across the world to monuments honoring soldiers who fell 100 years ago, victors and vanquished alike marked those sacrifices Saturday ahead of Armistice Day and assessed alliances that have been redrawn dramatically since the dark days of World War I.

The leaders of former enemies France and Germany, in an intimate gesture that underscored their countries’ current roles as guarantors of peace in Europe, held their heads together at the site north of Paris where the defeated Germans and the Allies signed the agreement that ended the 1914-18 war.

After Chancellor Angela Merkel briefly snuggled her head into the neck of French President Emmanuel Macron, the two went inside a replica of the train car where the armistice was reached and put their names in a guestbook. Macron then took Merkel’s hand in his, again highlighting the changes on the continent where two world wars were fought in the 20th century.

“Our Europe has been at peace for 73 years. There is no precedent for it, and it is at peace because we willed it and first and foremost, because Germany and France wanted it,” he said.

Merkel was equally convinced of the power their friendship exudes. 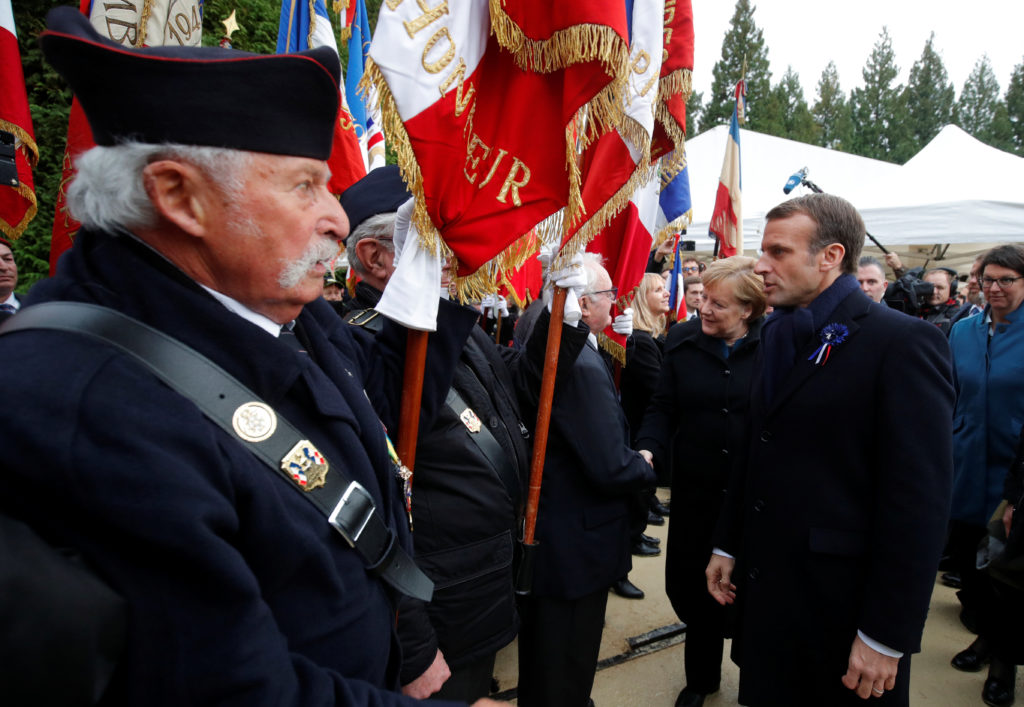 French President Emmanuel Macron and German Chancellor Angela Merkel meet with veterans at the Clairiere of Rethondes, during a commemoration ceremony for Armistice Day, 100 years after the end of the First World War, in Compiegne, France, November 10, 2018. Photo by Philippe Wojazer/Pool via Reuters

“The will is there, and I say this for Germany with full conviction, to do everything to achieve a more peaceful order in the world even though we know we have very, very much work still ahead of us,” she said.

The open show of affection was a welcome antidote for Macron. Earlier Saturday, the French leader had a somewhat awkward meeting with U.S. President Donald Trump. As Air Force One landed in Paris on Friday night, Trump wrote on Twitter he had been “very” insulted by comments Macron made in the days before that he considered anti-American.

A century ago, the entry of U.S. troops into World War I tipped the momentum toward its allies, including France and Britain. Even as he embarked on two days of observances for the Nov. 11, 1918 armistice, Trump said the United States now bears far too much of the burden to defend the West.

A flurry of Armistice-related diplomacy once again turned Paris, the jewel that Germany sought to take in 1914 but which the Allies successfully fought to defend, into the center of global attention Saturday as dozens of world leaders arrived in the French capital on the eve of the solemn centennial commemorations. 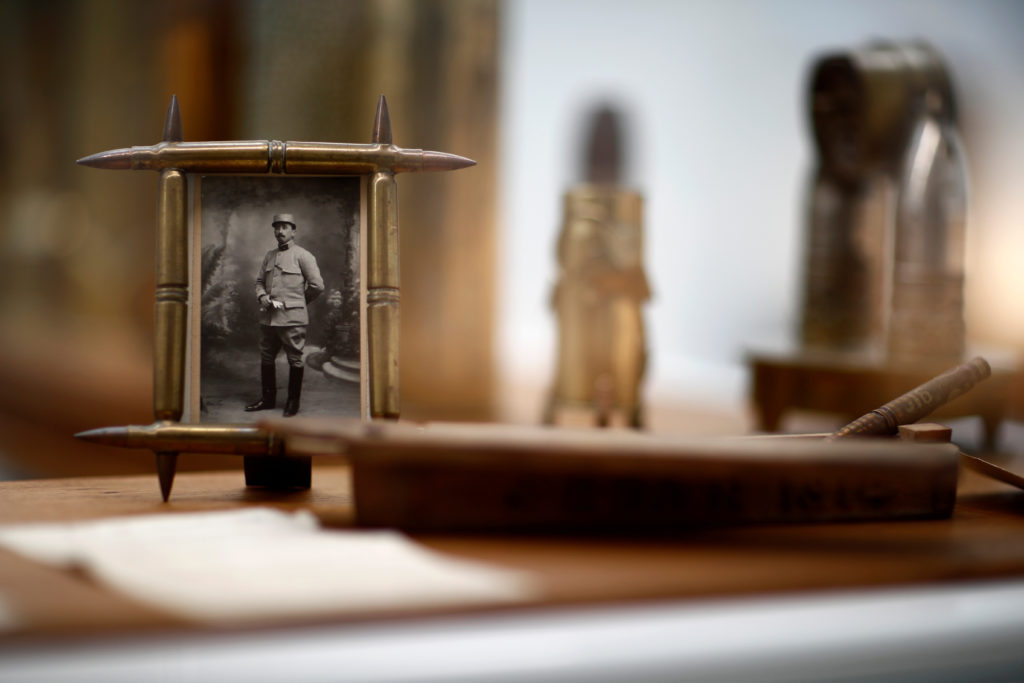 A portrait of a soldier is displayed at the Armistice Museum in the Clairiere de Rethondes in Compiegne where the Germans signed the armistice in 1918 that ended the World War One, France, August 30, 2018. Picture taken August 30, 2018. Photo by Christian Hartmann/Reuters

Merkel’s appearance in Compiegne marked how her nation’s bloodstained history with France has become a close alliance that is now the driving force behind the European Union.

In the four years of fighting, remembered for brutal trench warfare and the first use of gas, France, the British empire, Russia and the United States had the main armies opposing a German-led coalition that also included the Austro-Hungarian and Ottoman empires.

Yet, despite a war that was supposed to end all wars, World War II pitted both sides against each other once again in 1940.

Across the line that once marked the Western Front, leaders lauded the courage of soldiers who were killed during the unprecedented slaughter, before converging on Paris for a dinner.

The armistice entered into force on the 11th hour of the 11th day of the 11th month of 1918, and on Sunday 69 world leaders will commemorate the centennial of the event at the Tomb of the Unknown Soldier, underneath the Arc de Triomphe in central Paris. 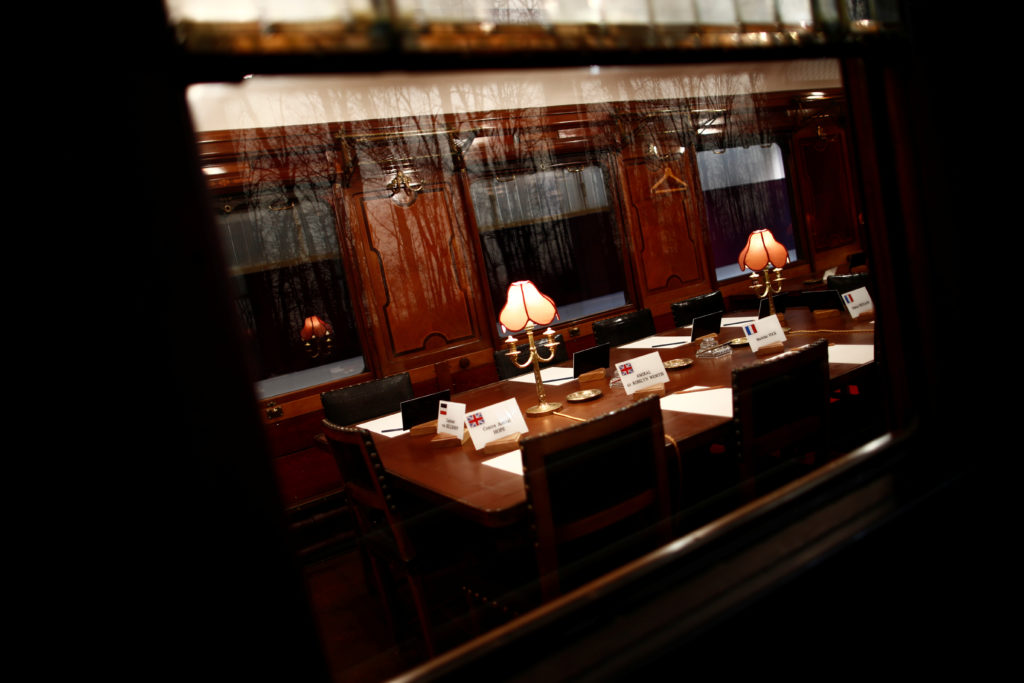 A view shows the table inside the replica of the wagon where the Germans signed the armistice in 1918 that ended the World War One at the Armistice Museum in the Clairiere de Rethondes in Compiegne, France, August 30, 2018. Picture taken August 30, 2018. Photo by Christian Hartmann/Reuters

At dawn Saturday, Canadian Prime Minister Justin Trudeau went to Vimy Ridge, the battlefield in northern France where Canada found its sense of self when it defeated German opposition against the odds.

Standing amid the white headstones against an ashen sky, Trudeau addressed the fallen, saying what Canada has achieved in the past century has been “a history built on your sacrifice. You stand for the values on which Canada was built.”

PM @Theresa_May and President @EmmanuelMacron laid a wreath of poppies and le bleuet at the Thiepval Memorial. #LestWeForget #Armistice pic.twitter.com/1fhF7oW9PA

In southern Belgium’s Mons, Canadians were also lauding George Price, the last Commonwealth soldier to die in the war when he was shot by a German sniper two minutes before the armistice took effect.

Trump was looking beyond the tragedy of death and destruction, asking in a tweet: “Is there anything better to celebrate than the end of a war, in particular that one, which was one of the bloodiest and worst of all time?”

After his meeting with Macron, Trump had been scheduled to head to the battlefield of Belleau Wood, 90 kilometers (55 miles) northeast of the capital, where U.S. troops had their breakthrough battle by stopping a German push for Paris shortly after entering the war in 1917.

The battle of Belleau Wood proved America’s mettle to allies and foes alike, and by the time the war ended U.S. forces were at least an equal to any of the other major armies, which were exhausted and depleted.

However, Trump canceled his visit because of bad weather and immediately came in for criticism.

“It’s incredible that a president would travel to France for this significant anniversary – and then remain in his hotel room watching TV rather than pay in person his respects to the Americans who gave their lives in France for the victory gained 100 years ago tomorrow,” David Frum, a speechwriter for former President George W. Bush, tweeted,

The White House sent a delegation that included chief of staff John Kelly in Trump’s place. Ben Rhodes, who served as deputy national security adviser in the Obama administration, said the White House should have had a fallback plan for the president.

“There is always a rain option. Always,” Rhodes said.

Trump is scheduled to visit a different U.S. cemetery close to Paris on Sunday.

Left: French President Emmanuel Macron and German Chancellor Angela Merkel hold hands after unveiling a plaque in the Clairiere of Rethondes during a commemoration ceremony for Armistice Day, 100 years after the end of the First World War, in Compiegne, France, November 10, 2018. Photo by Philippe Wojazer/Pool via Reuters