CEYLANPINAR, Turkey — As Russia and the United States each launched diplomatic forays to end Turkey’s invasion of northern Syria, Turkish President Recep Tayyip Erdogan on Wednesday defied pressure for a ceasefire and said the only way the offensive would end was if Syrian Kurdish fighters leave a designated border area “by tonight.”

Russia said it was working to prevent a conflict between Turkish troops and Syrian government forces that have moved in to Kurdish-held areas in the northeast. The Kurdish administration invited the Syrian military in to shield it from the Turkish attack.

A day ahead of a visit by U.S. Vice President Mike Pence to Ankara, tasked with negotiating out an end to the attack, the Kremlin said Erdogan had accepted an invitation by Russian President Vladimir Putin to visit Russia “in coming days” to discuss Syria.

Russia has moved quickly to further entrench its leadership role in the region after President Donald Trump ordered the pullout of American forces in northeastern Syria. The American move effectively abandoned the Kurdish fighters who were allied with the U.S. and cleared the way for Turkey’s invasion aimed at crushing them. After heavy criticism from both Republican and Democratic lawmakers, Washington then scrambled to find new leverage with the Turks, imposing economic sanctions aimed at forcing a cease-fire

Erdogan told reporters Wednesday that he had “no problem” with visiting Russia. But he suggested a planned Nov. 13 trip to Washington was now uncertain due to calls within the U.S. Congress to sanction Turkey.

The trip “is something to be assessed” after the talks with the American delegation, he said, adding that the sanctions and criticisms in the U.S. constituted “great disrespect toward the Turkish Republic.”

In an address to his ruling party legislators, Erdogan said Turkey would not be coerced into stopping its offensive or accept offers for a mediation with the Kurdish fighters, which Turkey considers as terrorists. He vowed to press ahead with the incursion until Turkish troops reach a depth of 30 to 35 kilometers (18-20 miles) inside Syria along a border area where Turkey intends to form a “safe zone.” 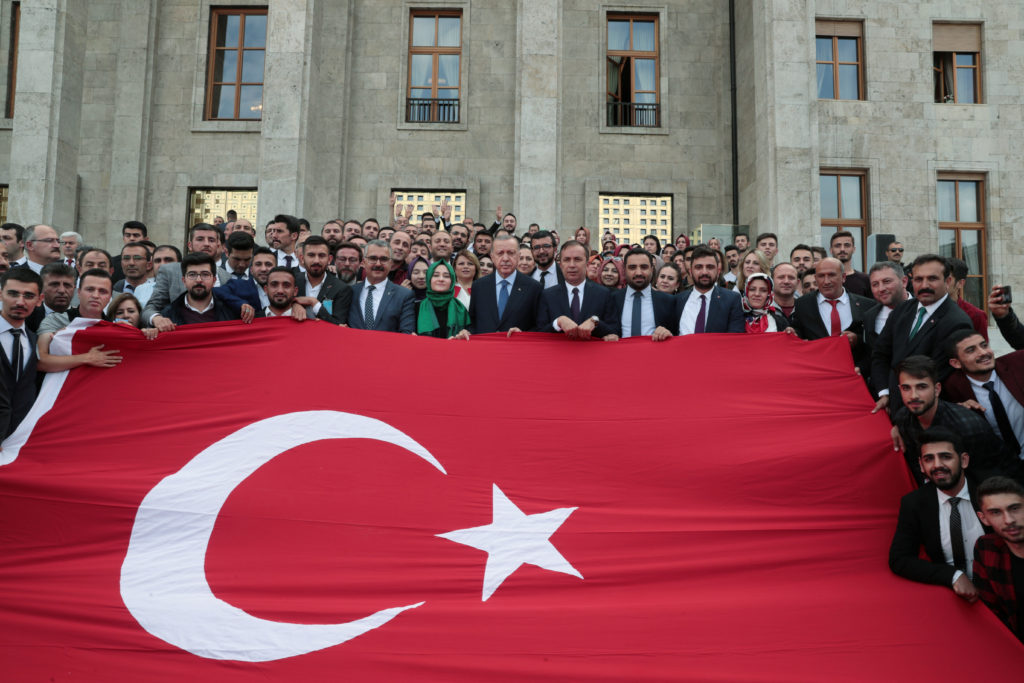 Turkish President Tayyip Erdogan poses with supporters of his ruling AK Party behind a national flag at the parliament in Ankara, Turkey, October 16, 2019. Photo by Murat Cetinmuhurdar / Presidential Press Office / Handout via REUTERS

“Our proposal is for the terrorists to lay down their arms, leave their equipment, destroy the traps they have created and leave the safe zone we as designated, as of tonight,” Erdogan said. “If this is done, our Operation Peace Spring will end by itself.”

Pence is joined in his Turkey visit by Secretary of State Mike Pompeo and national security adviser Robert O’Brien, aiming to negotiate a stop to the fighting in Syria’s northeast.

Erdogan ruled out direct or indirect talks with the Kurdish fighters, saying Turkey will not negotiate with “terrorists.”

“We are not looking for a peace mediator nor do we need one,” he said.

With the Turkish assault in its eighth day, Turkish forces and Kurdish fighters were still battling heavily Wednesday over the border town of Ras al-Ayn. Turkey had announced it captured the town days ago, but its hold now appeared uncertain amid Kurdish incursion.

America’s abrupt withdrawal of its troops pushed the Kurds to strike a deal with the Russia-backed government of Syrian President Bashar Assad, allowing its forces to return to regions of northern Syria it had abandoned at the height of the eight-year-old civil war. 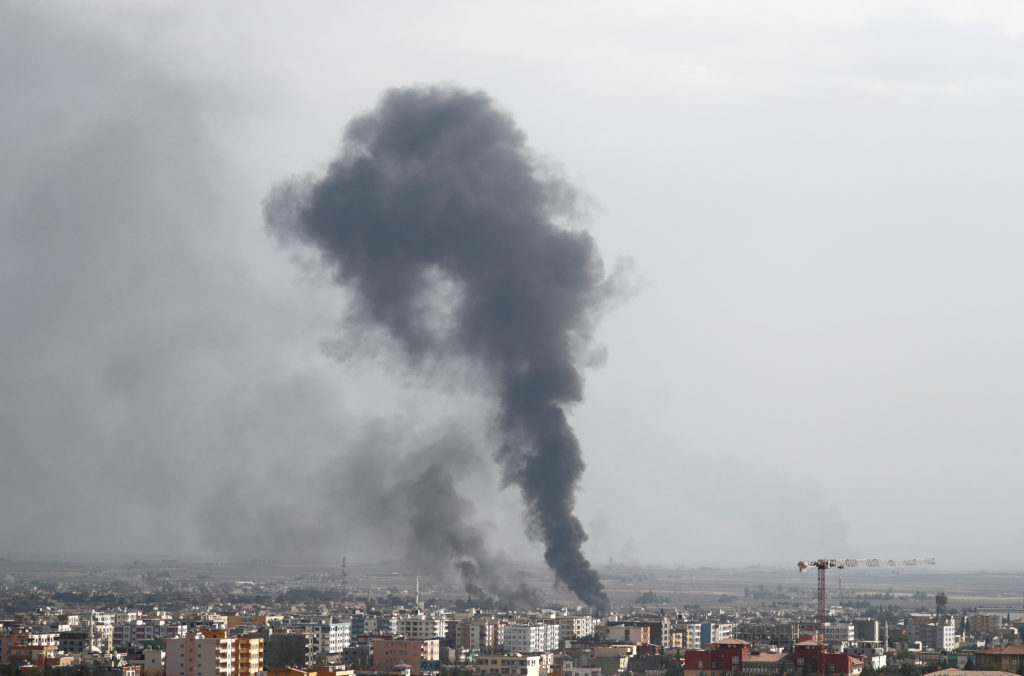 Smoke billows out after Turkish shelling on the Syrian town of Ras al Ain, as seen from the Turkish border town of Ceylanpinar, in Sanliurfa province, Turkey, October 16, 2019. Photo by REUTERS/Murad Sezer

It has also allowed Moscow to take a more prominent role as an interlocutor among Assad, the former U.S.-allied Kurds and the U.S.’s NATO ally Turkey.

On Wednesday, Russian Foreign Minister Sergey Lavrov said Russia is committed to mediating between the Syrian government and Turkey.

Russia has already announced it had deployed troops outside the flashpoint town of Manbij to keep apart the Syrian military and Turkish-led forces. Syrian forces took control of Manbij as U.S. troops completed their pull-out from the town on Tuesday. The Syrian and Russian deployments appear to have thwarted Turkey’s hopes to capture the town, located just west of the Euphrates, in its offensive.

Lavrov also said Moscow will also continue to encourage Syria’s Kurds and government to seek rapprochement following the U.S. withdrawal. The Kurds are hoping to reach a deal with Damascus that preserves at least some degree of the autonomy they seized for themselves amid Syria’s civil war.

During a visit to Iraq last week, Lavrov met with the leaders of the Kurdish autonomous region and said that Moscow is sympathetic to their need for autonomy.

Lavrov also blamed the United States and Western nations for undermining the Syrian state, saying this pushed “the Kurds toward separatism and confrontation with Arab tribes.”

In another sign of Moscow’s rising profile, France suggested it will also work more closely with Russia in Syria.

He called on European and other members of the coalition fighting the IS in Syria to regroup as the U.S. appeared to abdicate its leadership role in the region.

Left: Buses carry Syrian displaced families, who fled violence after the Turkish offensive against Syria, to displacement camps on the outskirts of Dohuk, Iraq October 16, 2019. Photo by REUTERS/Ari Jalal

This Syrian city embodies the consequences of Trump’s decision