US-backed fighters could soon resume offensive against IS

BAGHOUZ, Syria — U.S.-backed fighters could soon resume an offensive against the Islamic State group in the last area they control in Syria, an official said Saturday, adding that the battle against the extremists is expected to take three days.

Aras Orkesh of the Kurdish-led Syrian Democratic Forces said they have about 2,500 fighters ready for the battle in and around the eastern village of Baghouz, where IS fighters still have a presence. 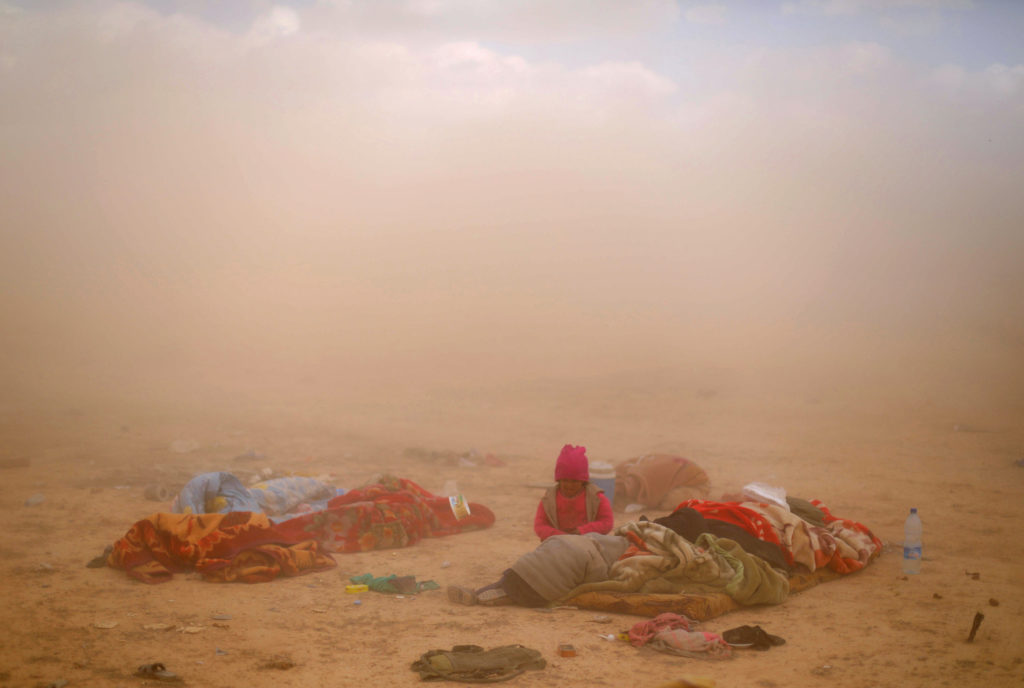 Children sit next to their injured mother near the village of Baghouz, Deir Al Zor province, in Syria March 7, 2019. Picture taken March 7, 2019. Photo by Rodi Said/Reuters

Under the cover of heavy coalition bombing on March 1-2, SDF forces advanced on the besieged tent encampment, leaving a corridor for residents to leave. Following that operation, thousands of residents and many fighters evacuated Baghouz over the next four days. But since Friday only a small group came out, raising speculations that a renewed military offensive was being planned.

On Saturday, a black flag inside Baghouz could be seen from a distance as well as moving trucks. On the front line, SDF fighters have assumed a relaxed stance with some walking around on rooftops exposed to IS fighters.

Orkesh, the SDF official, said the battle could restart “tonight or tomorrow. It’s the end of the cease-fire with Daesh.” He used an Arabic acronym to refer to IS, adding that the battle could take three days.

“What’s holding us up is the civilians, we can see them, women and children inside,” he said.

In Washington, a senior defense official estimated that nearly 20,000 people, including 3,500 to 4,000 adult males, have emerged from Baghouz since Feb. 20. The official, who could not be identified by name under Pentagon ground rules, said Friday that nearly all of the 20,000, including women and children, are seen as IS followers or adherents.

The official said it would not be a surprise, based on current conditions, if it took another couple of weeks to finish mopping up the IS enclave.

The area on the east bank of the Euphrates River in the province of Deir el-Zour that borders Iraq has been under attack by SDF since September. After capturing all of the surrounding towns and villages over the past six months, the SDF in recent weeks advanced on Baghouz from three sides, besieging it.

Hundreds of IS fighters, along with thousands of civilians, mostly family members, have evacuated the IS-held area after the SDF alternately applied military pressure and allowed time for evacuees to come out. In the last two weeks, many fighters appeared to be among those evacuating.

“What’s holding us up is the civilians, we can see them, women and children inside.” – Aras Orkesh of the Kurdish-led Syrian Democratic Forces

But some IS militants are still clinging to a patch of land inside the village and are vowing to fight.

The capture of Baghouz would be a milestone in the devastating four-year campaign to defeat the group’s so-called “caliphate” that once covered a vast territory straddling both Syria and Iraq. The fight against IS has taken place amid Syria’s nearly 8-year-old civil war.

In northern Syria, an official with a U.S.-backed group said a suicide car bomb attacker has blown himself up near a military vehicle in the northern Syrian town of Manbij, wounding eight people, most of them civilians.

He said seven civilians were wounded, one of them seriously, as well as a U.S.-backed fighter.

No one immediately claimed responsibility but in January IS claimed a suicide attack in Manbij that killed 19 people, including two U.S. service members and two American civilians.