Venezuelan showdown moves to UN as dueling presidents dig in

UNITED NATIONS — The United States urged all nations Saturday to support Venezuelan opposition leader Juan Guaido while Russia accused the Trump administration of attempting “to engineer a coup d’etat” against President Nicolas Maduro — a reflection of the world’s deep divisions over the crisis in the embattled Latin American country.

U.S. Secretary of State Mike Pompeo told the U.N. Security Council at a meeting called by the United States that it’s beyond time to back the Venezuelan people as they try to free themselves from what he called Maduro’s “illegitimate mafia state” and back Guaido, who has declared himself the country’s interim president, arguing that Maduro’s re-election was fraudulent.

What has played out in Venezuela and the world’s media between supporters and opponents of the Maduro government played out face-to-face in the chamber of the U.N.’s most powerful body, which has failed to take action on the Venezuelan crisis because of deep divisions, especially among the Security Council’s five veto-wielding permanent members.

The leaders of two of those council nations — France and Britain — joined Spain and Germany to turn up the pressure on Maduro Saturday, saying they would follow the U.S. and others in recognizing Guaido unless Venezuela calls new presidential elections within eight days.

But the opposition to Guaido was reflected in the initial procedural vote on whether the 15-member Security Council should even discuss the crisis in Venezuela, which is not on its official agenda.

The United States barely survived the vote to go ahead with the meeting, receiving the minimum nine “yes” votes from the council’s six Western nations along with Kuwait, Peru and the Dominican Republic. China, South Africa and Equatorial Guinea joined Russia in voting “no” while Indonesia and Ivory Coast abstained.

Pompeo went after Russia and China, accusing them of trying “to prop up Maduro while he is in dire straits … in the hopes of recovering billions of dollars in ill-considered investments and assistance made over the years.”

But he saved his sharped attack for Cuba, saying no country has done more to sustain “the nightmarish condition of the Venezuelan people.” He said Cuba has sent “security and intelligence thugs” to sustain Maduro’s “illegitimate rule.”

“Now is the time for every other national to pick a side,” Pompeo said. “No more delays, no more games. Either you stand with the forces of freedom, or you’re in league with Maduro and his mayhem.”

China’s U.N. Ambassador Ma Zhaoxu said his government “firmly opposed” the U.S. accusations and doesn’t interfere in the internal affairs of other countries.

“We hope the country that accuses others can do likewise itself,” Ma told the council.

The council meeting came a day after Guaido vowed to remain on the streets until his country has a transitional government, while Maduro dug in and accused his opponents of orchestrating a coup.

“They can cut a flower, but they will never keep spring from coming,” Guaido told supporters Friday, alluding to a similar phrase from the Chilean poet Pablo Neruda.

In rival press conferences, Guaido urged his followers to stage another mass protest next week, while Maduro pushed his call for dialogue.

Each man appeared ready to defend his claim to the presidency no matter the cost, with Guaido telling supporters that if he is arrested they should “stay the course” and peacefully protest. 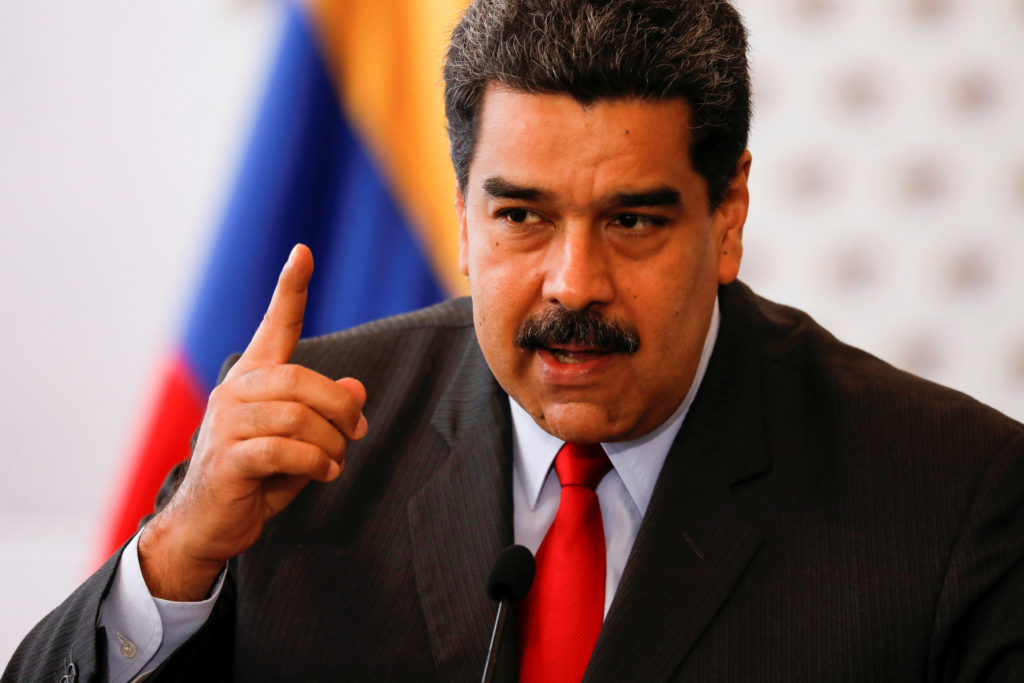 FILE PHOTO: Venezuela’s President Nicolas Maduro talks to the media after a meeting for signing an agreement on guarantees for the vote at the National Electoral Council (CNE) headquarters in Caracas, Venezuela March 2, 2018. REUTERS/Marco Bello/File Photo – RC1BB33DA760

But the standoff could set the scene for more violence and has plunged troubled Venezuela into a new chapter of political turmoil that rights groups say has already left more than two dozen dead as thousands take to the street demanding Maduro step down.

Guaido took a symbolic oath of office Wednesday proclaiming himself the nation’s constitutional leader on grounds that Maduro’s re-election last year was fraudulent — an allegation supported by the U.S., the European Union and many other nations.

The government of President Donald Trump announced it was recognizing the 35-year-old leader of the opposition-controlled National Assembly quickly after his oath, leading Maduro to say that he was breaking all diplomatic ties with the United States and expelling U.S. diplomats. Guaido told the Americans to stay.

Pompeo told the Security Council on Saturday: “Let me be 100 percent clear — President Trump and I fully expect that our diplomats will continue to receive protections provided under the Vienna Convention. Do not test the United States on our resolve to protect our people.”

Guaido’s move is the most direct challenge to Maduro’s rule despite years of protests at home and international efforts to isolate the regime amid a growing humanitarian crisis fueled by falling oil prices and government mismanagement.

Maduro is accusing the opposition of working with the U.S. to overthrow him. Though over a dozen nations are recognizing Guaido as president, Maduro still has the support of the military and powerful, longtime allies like Russia and China.

“This is nothing more than a coup d’etat, ordered, promoted, financed and supported by the government of the United States,” Maduro said Friday. “They intend to put a puppet government in Venezuela, destroy the state and take colonial control of the country.”

But he added that he was still willing to talk with the opposition even if he “had to go naked.”

Both sides attempted dialogue last year, but it fell apart as Maduro pushed forward with an early election that the country’s most popular opposition leaders were barred from running in. Many in the international community condemned that vote and now consider the National Assembly, which Maduro has stripped of its power, the only legitimate institution.

Left: U.S. Secretary of State Mike Pompeo speaks at the United Nations during a Security Council meeting about the situation in Venezuela in the Manhattan borough of New York City, New York, U.S., January 26, 2019. Photo by Carlo Allegri/Reuters