When to ease lockdowns? Nations offer wide mix of solutions

BERLIN — Pressures mounted Sunday on governments to ease the economic pain of coronavirus lockdowns after protests from those fearing for their livelihoods, and authorities responded with a wide range of possible dates and solutions and a few emphatic “not yets.”

Shutdowns that began in China in late January and spread to Europe, the U.S. and elsewhere have disrupted economic, social, cultural and religious life across much of the globe, plunging the world into its most painful economic slump since the Great Depression of the 1930s. Millions of workers have lost their jobs already, and many more fear that they are next.

With the arc of infection different in every nation, proposals have differed for coping with the virus that has claimed at least 160,000 lives over the past four months and for which there is still no vaccine. Some countries, like Britain, which is still deep in the middle of its outbreak, say it’s too soon to give definite lockdown easing dates.

In Germany, which has managed to significantly slow the rate of new infections since mid-March, authorities are allowing most small stores to reopen Monday. The head of an association representing German cities said many people would likely welcome the opportunity to shop in person again.

“But we’re not expecting a huge rush now,” Helmut Dedy told Germany’s dpa news agency. “The stores that are reopening will be just as accessible a week later.” 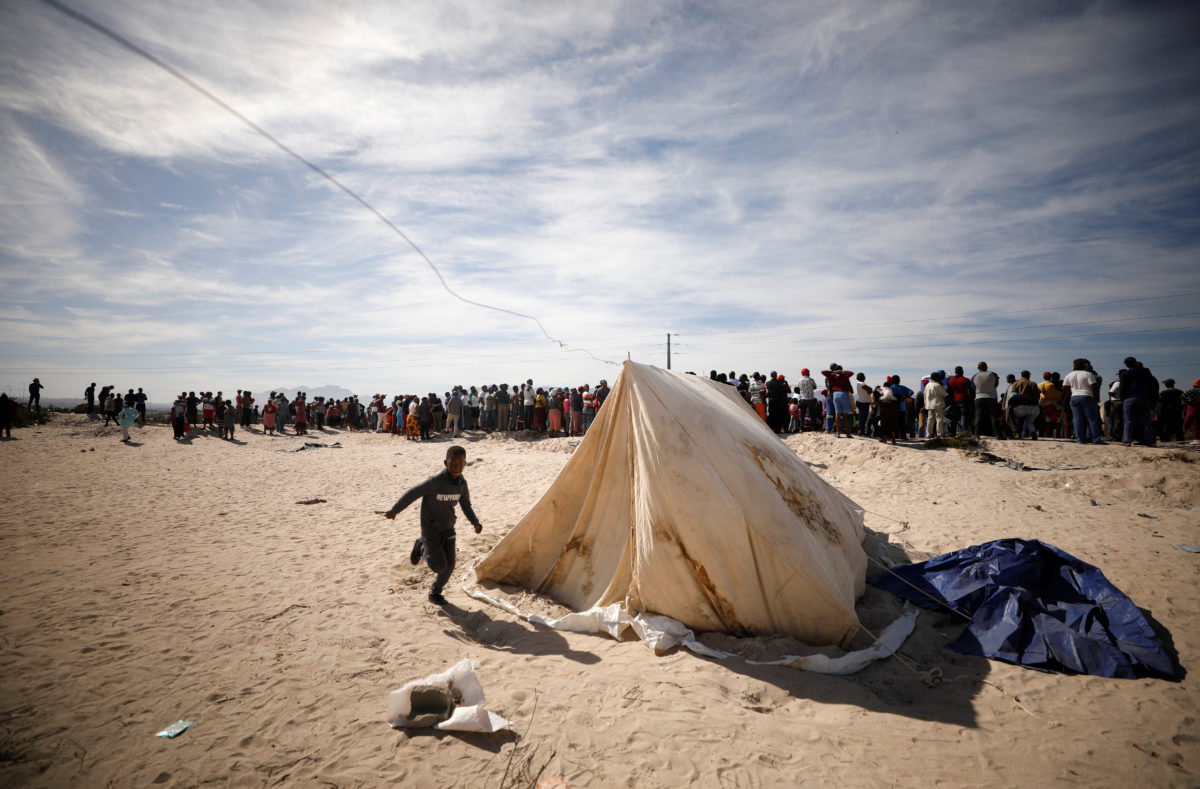 A child runs past a tent set up after a Khayelitsha township community won a court case against local authorities who had demolished shacks and evcited residents on land that they said was illegally occupied during a nationwide lockdown aimed at limiting the spread of coronavirus disease (COVID-19) in Cape Town, South Africa, April 19, 2020. Photo by Mike Hutchings/Reuters.

After six weeks of being stuck inside, Spanish authorities say children will be allowed to leave their homes beginning April 27. Spain imposed one of the strictest lockdowns in Europe, helping drive the daily infection rate from over 20% down to 2% for a country whose 20,000 fatalities are only surpassed by the United States and Italy.

Albania plans to let its mining and oil industries reopen Monday, along with hundreds of businesses including small retailers, food and fish factories, farming and fishing.

The death toll in the U.S. is nearing 40,000 with more than 735,000 confirmed infections, and the global case count has passed 2.3 million, according to a tally by Johns Hopkins University of national health reports. The actual extent of the pandemic is likely to be significantly higher due to mild infections that are missed, limited testing, problems counting the dead and some nations’ desires to underplay their outbreaks.

The International Monetary Fund expects the global economy to contract 3% this year — a far bigger loss than 2009′s 0.1% after the global financial crisis.

Still, many governments are resisting pressure to abruptly relax the virus lockdowns.

“We must not let down our guard until the last confirmed patient is recovered,” South Korea’s President Moon Jae-in said Sunday.

The country, which was hit early on by the virus, announced that new infections fell Sunday to eight, from a peak of 909 on Feb. 29. But officials have warned that a “quiet spread” is possible as people relax social distancing.

“It’s only when we have all those measures in place that we can be confident about relaxing some of the measures,” Gove told the BBC on Sunday, adding that pubs and restaurants “will be among the last” to leave the lockdown, which is now in place until May 7.

“No decision has been made on when we will reopen schools,” British Education Secretary Gavin Williamson tweeted. “I can reassure schools and parents that they will only reopen when the scientific advice indicates it is the right time to do so.”

U.K. health experts fear that Britain, which has nearly 15,500 confirmed deaths so far, could eventually have the highest virus death toll in Europe.

France’s health agency urged the public to stick to social distancing measures that have been extended until at least May 11. “Don’t relax our efforts at the moment when confinement is bearing fruit,” the agency said.

In the U.S., supporters of President Donald Trump protested in several states Saturday, ignoring social distancing and stay-at-home orders to demand that governors end controls on public activity. They were goaded on by Trump tweets.

Trump is pushing to relax the U.S. lockdown by May 1, a plan that hinges partly on more testing.

Texas, Indiana and some other states have announced plans to allow some retailing and other activity to resume. Florida and South Carolina have reopened beaches, with some drawing noticable crowds.

“We are not at a point when we are going to be reopening anything immediately,” Cuomo said.

In Pakistan, Prime Minister Imran Khan’s government bowed to demands by religious leaders and agreed to keep mosques open during the Islamic fasting month of Ramadan. Pakistan has been blamed for contributing to the virus’s spread by refusing to stop a gathering of tens of thousands of religious missionaries. Nearly 2,000 confirmed cases have been traced to them.

In Singapore, McDonald’s suspended operations after seven employees tested positive for the conronavirus. The company said it will keep paying more than 10,000 employees in 135 outlets during the closure, due to last through May 4.

Hundreds of people protested Saturday in major Brazilian cities against anti-virus lockdowns. President Jair Bolsonaro, who has downplayed the threat of the disease and criticized anti-virus shutdowns imposed by state governors, said he would recommend reopening the country’s borders with Paraguay and Uruguay.

Left: A supporter of Donald Trump holds a flag during a demonstration of conspiracy theorists as other demonstrators protest against the lockdown imposed to slow the spread of the coronavirus disease (COVID-19) in Berlin, Germany, April 18, 2020. Photo by Christian Mang/Reuters.