Why the number of novel coronavirus cases just jumped

In a flash, the number of people sick in China with novel coronavirus jumped to nearly 47,000 people from 44,730 on Wednesday. But the rise does not represent a spike in new cases — health authorities instead changed their criteria for confirming that someone has been infected.

The new number reflects suspected cases of Covid-19, as the World Health Organization has christened the illness, said Dr. Oliver Morgan, director of the WHO Health Emergency Information and Risk Assessment. And it has to do with how a single Chinese province is screening patients.

In Hubei province, the virus’ epicenter, physicians can use chest imaging to diagnose someone with Covid-19. This screening method is much faster than waiting for results from a biological sample submitted for laboratory tests, thus speeding the process of confirming a case.

READ MORE: How a dream cruise ended with a novel coronavirus quarantine

These changes will also improve the responsiveness of public health strategies, said Dr. Michael Ryan, executive director for the WHO Health Emergencies Programme during a press conference Thursday. That includes figuring out who has been in contact with a sick person and then determining if those people became infected as well.

Not having to wait for lab confirmation also ensures “that people get to clinical care more quickly,” he said.

But for the rest of China, the surveillance procedures remain unchanged, Morgan said.

Outside that country, the number of cases has remained fairly contained. The WHO reported that 447 people in 24 countries have confirmed cases of this disease. One person died in the Philippines and one died in Japan, where nearly 200 cases have been identified on a cruise ship. On Thursday, the health agency reported that 1,368 people in China have died from the virus.

It has become clear that “China does not have a handle on the number of cases,” said Lawrence Gostin, global health law professor at Georgetown University who also directs the World Health Organization Collaborating Center on National and Global Health Law. Instead of being alarmed by “short-term rises or drops in the case counts” that could be “artifacts of surveillance, data and case definitions,” Gostin said people should instead pay attention to “longer-term horizon trends.” 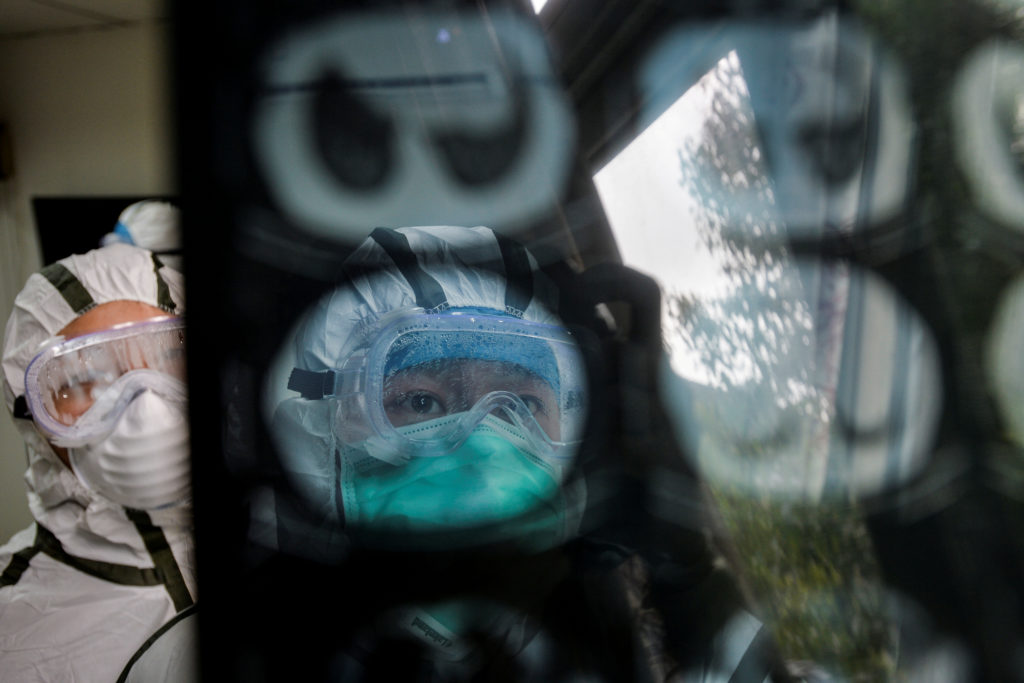 Medical workers in protective suits check a CT scan image of a patient at a community health service center, which has an isolated section to receive patients with mild symptoms caused by the novel coronavirus and suspected patients of the virus, in Qingshan district of Wuhan, Hubei province, China, on Feb. 8, 2020. Photo by China Daily via REUTERS

What the U.S. should watch

So far, 15 Americans have been diagnosed with Covid-19, according to the Centers for Disease Control and Prevention. The latest two cases were identified as U.S. citizens airlifted in recent weeks from Wuhan, China, where the virus originated. They had been held under federal quarantine orders on U.S. military bases.

The disease could “occupy this middle ground between contagion and virulence,” Gottlieb told lawmakers, directing their attention to how the virus has spread so far in Singapore with its tropical climate and temperatures hovering around 90 degrees Fahrenheit.

That contradicts what President Donald Trump said during a campaign rally in New Hampshire this week.

Such a remark is “misleading” and “an irresponsible thing to say,” Gostin said. While the virus initially could appear to subside when weather warms, that does not mean the problem will go away. Instead, the virus could become seasonal and join the strains of influenza that crisscross the globe each year.

“If you’re the president, you have to wait for the scientific evidence,” Gostin said.

Evidence is what the global public health community is struggling to gather. This week, more than 300 researchers and scientists gathered at the World Health Organization in Geneva, Switzerland, to figure out best practices for caring for patients with the disease and how to develop medications and vaccines to prevent further spread and illness.

To shore up resources, the WHO asked the global community to provide $675 million to pay for diagnostic test kits, gowns, gloves, respirators and more. American officials committed up to $100 million during a news conference, where they also announced travel restrictions on people attempting to enter the U.S. from China. Historically, the U.S. has been the WHO’s largest donor; China ranks as the second-largest donor.

When the Trump administration unveiled its proposed federal budget for the 2021 fiscal year, it suggested cutting more than $3 billion to global health funding, including money to the WHO. The White House has already curtailed funds for global health efforts in recent years, a move now criticized as short-sighted as the number of people sickened with novel coronavirus climbs.

Economist Roger Bate specializes in international health policy at the American Enterprise Institute, and he said he feels confident that Congress will not go along with Trump’s proposed cuts to global public health efforts this time. “If at all anything,” he said, “I think it’ll be an increase,” for reasons rooted in the U.S.’s own self-interest.

Ramping up resources to fight disease “at its source” rather than waiting for something like novel coronavirus to spread and overwhelm the U.S. health care system is “ more efficient, better public health and better economics,” Bate said.

And building up capacity to not only respond to, but also to prepare for, pandemic illness is something the public health community needs right now, he said.

“At some point the big one will happen, and we need to be better prepared to deal with it,” he said. “We continue to remind ourselves and learn how to deal with these things.”

Left: Medical workers in protective suits work inside an isolated section at a community health service center, which has received patients with mild symptoms caused by the novel coronavirus and suspected patients of the virus, in Qingshan district of Wuhan, Hubei province, China on Feb. 8, 2020. Photo by China Daily via REUTERS