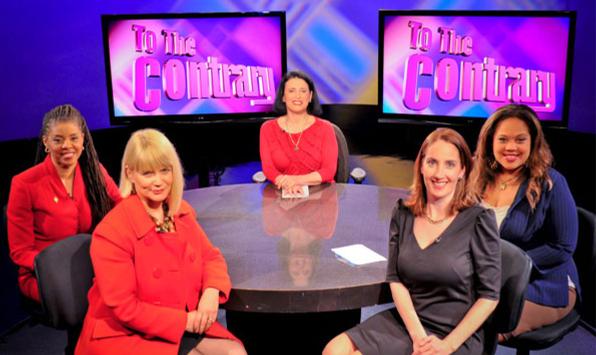 To The Contrary (TTC,) public television's successful all-female news analysis series, is now in its 27th season on air. The program was launched in 1992, dubbed the "Year of the Woman in American Politics" as women's representation in Congress blossomed. With women in the forefront of politics and on the cutting edge of national agendas, To The Contrary continues as an essential, timely forum for women to discuss national and international issues and policies. The program covers news and offers a platform to views that are rarely, if ever, available elsewhere on television. It is true appointment television.

With more women in Congress, in the Cabinet and on the Supreme Court, women's perspectives are more high-profile than ever before. Americans have cast strong votes of confidence in women leaders and leaders who promote concerns embraced by women. To The Contrary, available in 91% of television markets and a leader in women's news and perspectives, will continue to make women's voices heard as we cover all issues affecting women, families and communities of color.

To The Contrary is produced by Persephone Productions. Airing on PBS stations nationwide, in Canada, and internationally on VOA TV, To The Contrary has built a solid viewer base including more than a million viewers each week. Viewer response, media attention and strong carriage on national public television stations and elsewhere have all helped to confirm that the show does indeed fill a much-needed niche in American television programming.