Combat: the Emotions of War 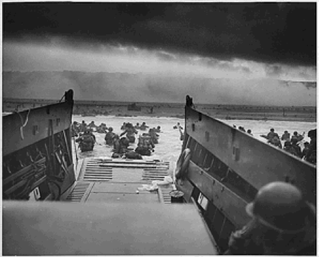 U.S. Troops Wading through Water and Nazi Gunfire (WWII, D-day)National ArchivesThe Duality of War. War is the most destructive and pitiless of all human activities. And yet the experience of war has a profound and strangely compelling effect on those who fight. Combat kills, maims, and terrifies, but it can also reveal the power of brotherhood and a selfless sense of purpose. It’s an experience that changes soldiers, and those changes last a lifetime.

Most who join the military and go to war are young—18, 19 years old—and many have never been away from home. They have little experience of the world, let alone war, death, and killing. For them, and for all soldiers, combat is a complex mix of emotions that define the experience of war and shape the experience of coming home.

Fear and Exhilaration. War is a lot of things and it is unrealistic to pretend that exciting isn’t one of them. War offers soldiers raw life: vibrant, terrifying, and full blast. According to Sebastian Junger, “It is insanely exciting. It is the worst thing in the world, inflicting both physical and emotional injuries, yet the people who have been through it often miss it terribly.” This exhilaration is related to the brain’s physiological response to trauma and stress centered in the amygdala—the fight, flight, or freeze part of the brain—triggering adrenaline flow, pushing up pulse and blood pressure levels dramatically, and flooding the heart, brain, and major muscle groups. “There’s nothing like it in the world,” one Afghanistan veteran told Junger. “If it’s negative 20 degrees outside, you’re sweating. If it’s 120, you’re ice cold. It’s an adrenaline rush like you can’t imagine.”

Brotherhood and Purpose. The capacity for self-sacrifice among human beings is nowhere more evident than in the bond between soldiers during war. Sebastian Junger calls this brotherhood the “core experience of combat… The willingness to die for another person is a form of love, and is a profound and essential part of the experience.”

Some combat veterans have felt that their lives never mattered more than when they were in combat. This sense of meaning and purpose grows out of protecting, and being protected by, their comrades in arms—a shared commitment to safeguard one another's lives that is non-negotiable and only deepens with time. Psychiatrist Jonathan Shay tells us that “The terror and privation of combat bonds men in a way that the word ‘brother’ only partly captures. Men become mothers to one another in combat.” 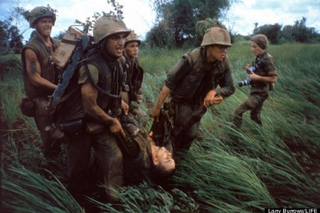 Carrying the woundedTime Life ArchiveKilling. Young soldiers in combat inevitably confront killing. They take life away from others, and in so doing breach one of the most fundamental moral values of their society, often with long-term consequences. Fighting for survival in Vietnam, Karl Marlantes often felt satisfaction when his unit killed the enemy. In later years, he felt haunted by those deaths, as do other combat veterans.

Looking back to the origins of human warfare, it’s clear that conflict is deeply related to protection of home and kin, and not to killing for its own sake. Yet, however compelling the reason, killing is a difficult act with difficult consequences. Prof. Dave Grossman tells us that killing can bring immediate “survivor euphoria,” in which the happiness of the survivor at being alive is inseparable from the death of the other person. But the soldier might then ask a troubling question: “I just killed and I am happy about it. Does that mean I like killing?”

Barbara Van Dahlen, Ph.D., Founder and President of Give an Hour, a U.S.-based non profit that provides free mental health care to those who serve and their families, believes young soldiers should be better prepared emotionally for the realities of war, even though no one can fully prepare for the experience of combat. While killing an enemy combatant might be unavoidable, the act of killing is understandably troubling and potentially psychologically destructive. Understanding this reality can help warriors heal emotionally from the psychological consequences of war.

Veterans talk about the feelings of sadness that are a central part of combat.

Into the Jaws of Death: National Archives

These stories from Story Corps further illustrate soldiers emotions after going to war.