A screengrab from 'For Sama,' a 2019 documentary following one young female filmmaker's experience of life in rebel-held Aleppo, Syria, as bombs fell and the city crumbled.

When Russian President Vladimir Putin first launched airstrikes inside Syria in fall 2015, the Syrian conflict was in its fifth year. Armed rebels, who opposed Syrian President Bashar al-Assad’s brutal crackdown on civilians, were gaining ground; ISIS was on the rise; and Assad had acknowledged his army was on the retreat.

Russia had said its military was targeting ISIS and other terrorist groups. But in the days, months and years to come, Russian airpower reportedly exacted a stark toll on Syrian civilians. Putin’s military intervention — including aiding his ally Assad in besieging opposition-held areas of Aleppo and bombing hospitals, ultimately helped Assad regain territory and stay in power.

Now civilians in Ukraine are coming under Russian bombardment, with hospitals reportedly in the line of fire, according to Ukrainian officials. The New York Times has described “indiscriminate slaughter by an invading Russian army that has increasingly targeted heavily populated civilian areas.”

“You look at the bombing of Kyiv today, or Kharkiv, and it echoes the destruction of Aleppo that was carried out by Russian forces under the direction of Vladimir Putin,” The New Yorker staff writer Susan Glasser told FRONTLINE in an interview with producer Mike Wiser for the upcoming documentary Putin’s Road to War.

While the world’s attention is on Ukraine, the crisis in Syria — where Assad remains in power — continues.

The Syrian conflict began unfolding 11 years ago, in early March 2011. After popular uprisings swept Tunisia and Egypt, a group of young schoolboys in the small Syrian farming town of Deraa, 60 miles south of Damascus, painted messages opposing Assad on a local wall. Shortly thereafter, they were rounded up by the government’s secret police and reportedly beaten and tortured. Outrage over their treatment helped protests against the Assad regime in Deraa and beyond gather momentum by March 15, the date widely considered to be the start of the Syrian uprising.

As Syrians took to the streets to protest and to call for more freedoms, the response by Assad and his security forces was swift and brutal — following a playbook for crushing dissent that his ruling family had honed over 40 years. But the 2011 killings sparked further anti-Assad anger instead of suppressing it, and what began as peaceful protests evolved into an armed opposition movement, as the government’s tactics escalated.

In the coming years, Assad and his allies attempted to put down the revolution through a variety of means, including aerial bombardments that killed civilians and the use of chemical weapons, confirmed by the Organization for the Prohibition of Chemical Weapons.

Putin’s 2015 entry into the conflict was pivotal for Assad: At a time when the Syrian president was weak, Russia “joined Assad against the opposition, thereby pouring gasoline on the civil war,” Ashton Carter, then the U.S. secretary of defense, said in FRONTLINE’s 2016 documentary Confronting ISIS.

As foreign actors stoked the conflict, the tactics of some armed opposition groups also grew more brutal. Extremists, including the leader of ISIS, stepped in and exploited the chaos, with ordinary people caught in the middle. Many players in the conflict — including the U.S.-led anti-ISIS military coalition — ultimately would be accused of attacking civilian areas in Syria.

A 2021 report published under the umbrella of the UN Human Rights Council said that, over a decade of conflict, “pro-government forces, but also other warring parties, resorted to methods of waging war and used weaponry that minimized risks to their fighters, rather than those minimizing harm to civilians.”

Civilian areas in Idlib province, the last remaining opposition stronghold in Syria, have reportedly continued to come under attack by Russian and Syrian government forces in recent months.

According to the UN Refugee Agency, more than 13 million people inside Syria are “in dire need of humanitarian assistance,” and more than 50% of the country’s population is still “displaced from their homes — including 6.8 million refugees living in neighboring countries and another 6.7 million internally displaced inside Syria.” Precise counts are difficult to come by, but the United Nations estimated in 2021 that deaths due to the Syrian conflict had reached approximately 350,000, a number it said was “certainly” an undercount.

Following reports alleging that Russia was recruiting Syrians and others to fight in Ukraine, on March 11 Putin expressed support for deploying foreign fighters he characterized as volunteers.

We’ve collected a number of FRONTLINE documentaries on the origins and evolution of the Syrian conflict, its impact on the country’s people, and how the U.S. has responded. Stream them below, grouped loosely by theme, for a better understanding of the war and its ongoing toll.

From the first year of the conflict, this film looks at how the Syrian rebellion began, how Assad moved to crush it and how his regime originally came to power.

Eighteen months into the rebellion, this documentary examined how Assad held on to power via increasingly brutal means, including attacking civilian neighborhoods, as opposition tactics also escalated.

Filmed inside government-controlled areas of Syria, this documentary examined the contrast between the Assad regime’s PR campaign and the reality of life on the ground, as well as why many regime loyalists equated all opponents of Assad with ISIS and the perspectives of some Syrians pushing for a political solution.

INSIDE THE SYRIAN OPPOSITION

With undercover reporting, this film followed members of the Syrian opposition movement who were forced into hiding, revealing accounts of torture by government security forces.

This documentary followed Syria’s rebel leaders and warring factions within the opposition movement, finding that some had turned to brutal means.

Believed to be the first in-depth U.S. TV report on the emergence of ISIS, this film showed how, three years into Syria’s war, rebel forces were no longer fighting only the Assad regime but were also vying for control against a ruthless group calling itself the Islamic State.

This documentary followed Syrian rebel fighters who said they were being secretly armed and trained by the United States, part of a covert U.S. intelligence program.

Over most of two decades, Abu Mohammad al-Jolani’s life was a roadmap of Islamist militancy in Iraq and Syria. Designated a terrorist by the United States, the powerful Syrian militant said his fight was with Assad, not the U.S., in his first interview with an American reporter.

Filmed in Syria’s rural Orontes River valley, this documentary looked at how the conflict pitted neighbor against neighbor: on one side, a young rebel soldier fighting to the death to bring down Assad, and facing him, a career soldier determined to preserve the regime’s hold on power.

An Oscar nominee, this documentary followed four children surviving in war-torn Aleppo, their escape to safety in Germany and their adjustment to life as refugees.

This panoramic film told the first-person stories of refugees and migrants fleeing persecution and war worldwide, including in Syria. It incorporated footage filmed by the refugees themselves as they left their homes on dangerous journeys in search of safety, including a harrowing sequence filmed by a Syrian refugee on a sinking dinghy crossing the Mediterranean — a journey on which thousands have died.

A sequel to the 2016 film, this documentary told the intimate, firsthand stories of refugees and migrants from the Middle East and Africa who, caught in Europe’s tightened borders, faced the global rise of nationalism and anti-immigrant sentiment. It expanded on the story of a Syrian family featured in 2016’s Exodus.

This Oscar-nominated film documented the harrowing realities of the siege on rebel-held Aleppo and what Physicians for Human Rights described as “systematic” hospital bombings by Assad’s military and Russian forces. The documentary unfolded from a rare perspective: that of a female filmmaker, Waad al-Kateab, married to one of the last doctors who remained in the war-torn city, as she tried to raise her baby daughter, Sama, amid the devastation.

This documentary traced how the extremist group that would become known as ISIS rose to power, including by taking advantage of the conflict in Syria, and examined the stakes of disagreements inside the Obama administration over whether to provide arms for moderate rebels.

This documentary chronicled how President Barack Obama responded to the Syrian uprising, the Assad regime’s crackdown and the chaos that followed. The film paid particular attention to deep divisions within the Obama administration about what the U.S.’s role should be, including what happened when the White House assessed that the Assad regime had crossed what Obama once called “a red line” — the use of chemical weapons on civilians — and how Russia stepped in with a diplomatic proposition.

As part of its examination of how ISIS came to be, this documentary recounted how Abu Bakr al-Baghdadi exploited the Syrian uprising and sent agents into Syria to commit bloody attacks and fuel the war, ultimately seizing large swaths of territory and declaring a capital in Raqqa.

This film examined the successes and failures of the U.S.-led effort to degrade and destroy ISIS, including the Obama administration’s struggle to deal effectively with the crisis in Syria, and what happened when Putin’s military entered the fray. 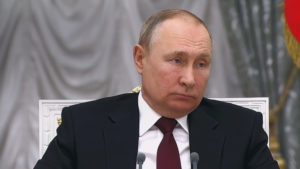