The same is true for Mae West’s signature line, which she first spoke as the character Lady Lou in the 1933 film “She Done Him Wrong.” What eventually became, “Come up and see me sometime,” began its life as, “Why don’t you come up some time and see me”— words spoken by a character as brash and seductive as the woman who played her. 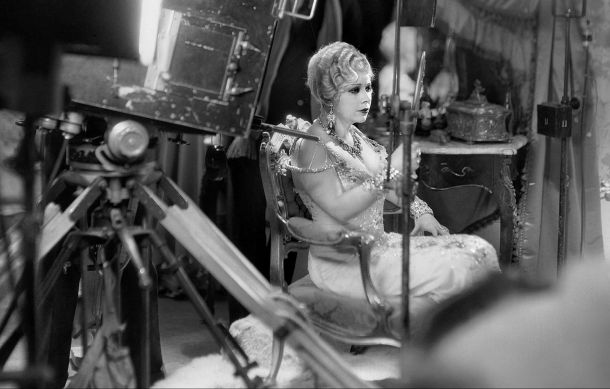 Mae West checks her appearance on the set of She Done Him Wrong, 1933. Photo: Alamy Stock Photo

Based on the 1928 Broadway play, “Diamond Lil,” which West wrote and starred in, “She Done Him Wrong” is about a sexy 1890s saloon singer with no shortage of male suitors. The film features Cary Grant in one of his earliest roles. In an exchange between West’s Lady Lou and Grant’s Captain Cummings, Lou attempts to convince Cummings to come up and…well, you know.

– Lou: I always did like a man in a uniform. That one fits you grand. Why don’t you come up sometime and see me? I’m home every evening.
– Cummings: Yeah, but, I’m busy every evening.
– Lou: Busy? Say, what are you trying to do, insult me?
– Cummings: Why, no, not at all. I’m just busy, that’s all. You see, we’re holding meetings in Jacobson’s Hall every evening. Any time you have a moment to spare, I’d be glad to have you drop in. You’re more than welcome.
– Lou: I heard you. But you ain’t kidding me any. You know, I met your kind before. Why don’t you come up sometime, hmm?
– Cummings: Well, I…
– Lou: Don’t be afraid. I won’t tell.
– Cummings: But, uh…
– Lou: Come up. I’ll tell your fortune. Ah, you can be had.

“Come up and see me sometime,” was used in ads for both “She Done Him Wrong” and “I’m No Angel,” another Mae West-Cary Grant collaboration from 1933. In the latter film, the quote took on its now-popular wording (consistent with the advertising).

Over time, the quote became so well known that it spanned media. West recorded a song called, what else, “Come up and See Me Sometime.” Even Saturday Night Live got in on the action with a 2011 sketch starring Melissa McCarthy as Golden Age film starlet Lulu Diamonds (a thinly veiled take on Diamond Lil and Lady Lou) uttering her own twist on the line: “Why don’t you come upstairs and see me up there sometime” (as if the wording wasn’t confusing enough).

Perhaps what makes a great line isn’t its exact wording, but rather what it tells us about the character who said it — or the way it makes us feel when we hear it. Though some writers might take offense at their misquoted line, others might appreciate its ability to take on a life of its own. The latter describes West, who adopted the “misquoted” version of the line for the rest of her life. Still, when the precise words are misquoted, “what we have here is a failure to communicate” (or is it “what we’ve got here is failure to communicate?”).

*For those keeping score, here are the correct quotes:

Darth Vader: “No, I am your father.” (The Empire Strikes Back)
Ilsa Lund (not Rick Blaine): “Play it, Sam.” (Casablanca)
Hannibal Lecter: “Good evening, Clarice.” (The Silence of the Lambs)