c.1901: West makes her show business debut as Baby Mae in an amateur evening competition at the Royal Theater; she wins a contest with her rendition of “Moving Day.”

c.1901-1905: West performs in Hal Clarendon’s stock company, doing such plays as UNCLE TOM’S CABIN (as Little Eva), TEN NIGHTS IN A BARROOM, and FOR THEIR CHILD’S SAKE.

April 11, 1911: West secretly marries Wallace in Milwaukee but separates from him within a year.

September 22, 1911: West appears in a Ned Wayburn revue titled A LA BROADWAY at the Folies-Bergere Theater in New York.

November 20, 1911: West opens in VERA VIOLETTA for the Shubert Brothers.

1913: West debuts her solo comedienne act billed as the “Original Brinkley Girl” on the Keith Circuit.

1914: West has a passionate romantic affair with accordionist Guido Deiro.

October 4, 1918: SOMETIME opens at the Shubert Theater with West as a chorus girl; she introduces the shimmy dance to Broadway; the show closes in July 1919.

December 25, 1919: West is featured on the cover of the NEW YORK DRAMATIC MIRROR.

August 15, 1921: THE MIMIC WORLD OF 1921 opens with West cast as Cleopatra in a sketch titled “Shakespeare’s Garden of Love.”

1921: West receives copyright for her one-act play THE RUBY RING.

1922: West teams with Harry Richman for a long vaudeville run.

1924: West used the name Sydney Rosenfeld to adapt CHICK from a play by Carl Jacoby. 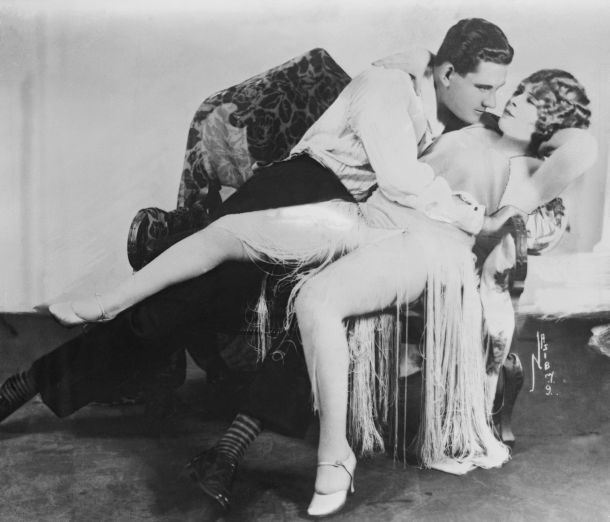 Mae West in a scene from “Sex,” one of the 3 plays raided by police. Photo: Getty Images

January 31, 1927: West’s play THE DRAG opens in Bridgeport, CT, for a trial run, but it never plays in New York due to lack of approval by screening committee. 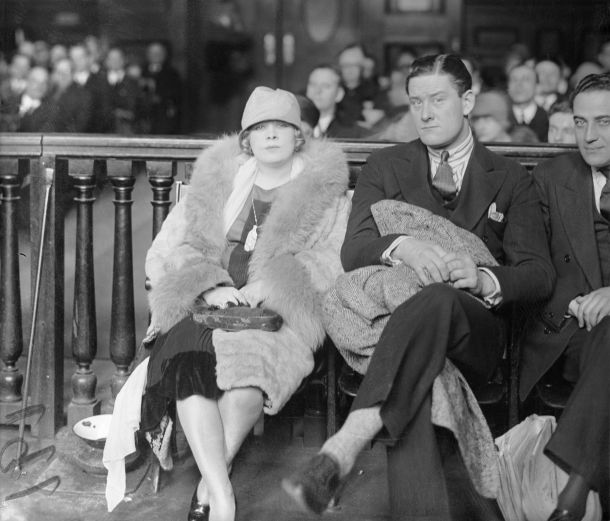 New York: Members of the cast of Sex, were hauled to court charged with giving a performance not tending to advance the morals of the spectators. Principal members of the cast were brought before the bar. Photo shows Mae West and Barry O’Neill, two of the principal actors as they appeared in the west court before Judge Simpson. Photo: Getty Images

February 27, 1927: SEX is raided by the police, and West is indicted for immorality.

April 20, 1927: West is fined $500 and sentenced to ten days on Welfare Island for her authorship of SEX (she serves eight days).

November 4, 1927: West’s play THE WICKED AGE opens in Daly’s Theater for 19 performances; West closes the play due to contract disagreements with the leading man. 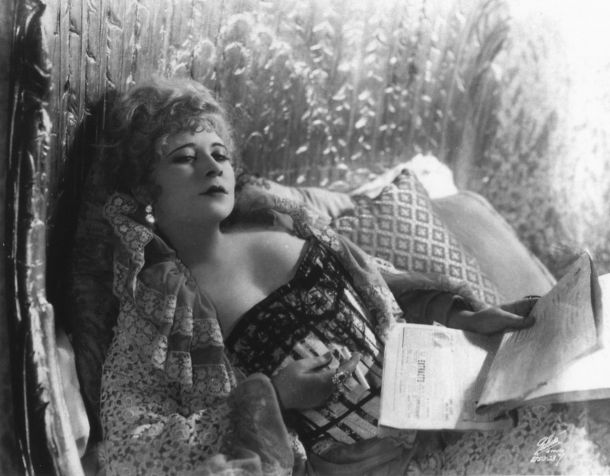 Mae West in her famous swan bed in the play Diamond Lil, 1928.

1928: West has affair with George Raft during rehearsals for DIAMOND LIL.

September 17, 1928: West’s play THE PLEASURE MAN opens at the Bronx Opera House; it opens at the Biltmore on October 1 and is raided twice by the police. 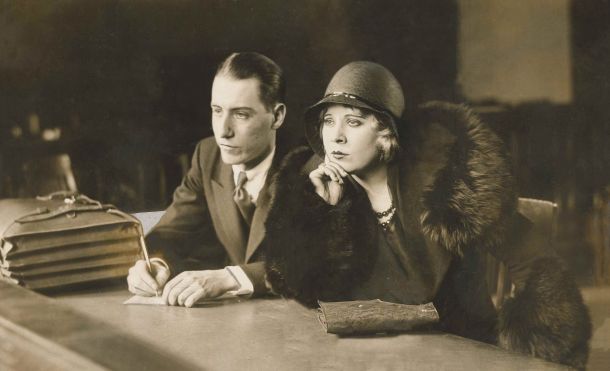 Mae West with her attorney at the trial for her controversial play Pleasure Man.

1929: West tours with DIAMOND LIL; she suffers severe abdominal pains during performances in Chicago and is healed by Sri Deva Ram Sukul, beginning her interest in the powers of spiritualism.

June 1932: West and Timony travel to Hollywood for her first film role. 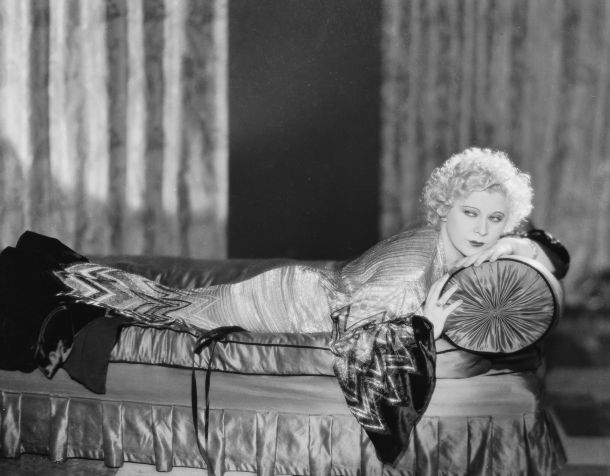 Mae West on the set of her first film, Night After Night.

October 1932: NIGHT AFTER NIGHT opens, with West as Maudie Triplett.

1932: The novelization of DIAMOND LIL is published by Macaulay Company.

Mae West in the film “She Done Him Wrong.”

February 1933: SHE DONE HIM WRONG is released by Paramount. 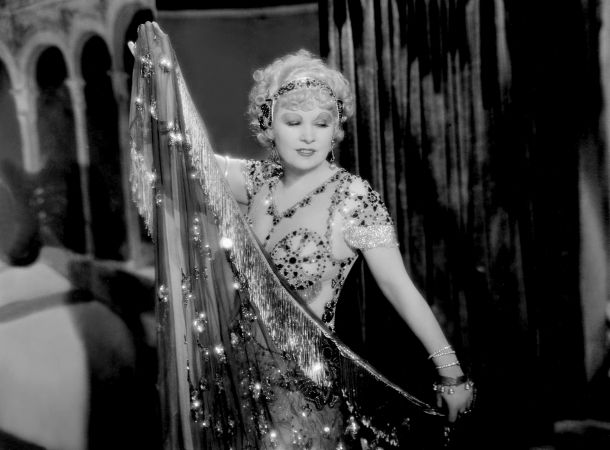 October 4, 1933: I’M NO ANGEL premieres at the Oriental theater in Chicago.

January 1934: A wax likeness of West is unveiled in Madame Tussaud’s Waxworks in London.

January 1934: SHE WRONGED HIM RIGHT, a Betty Boop cartoon, is released. 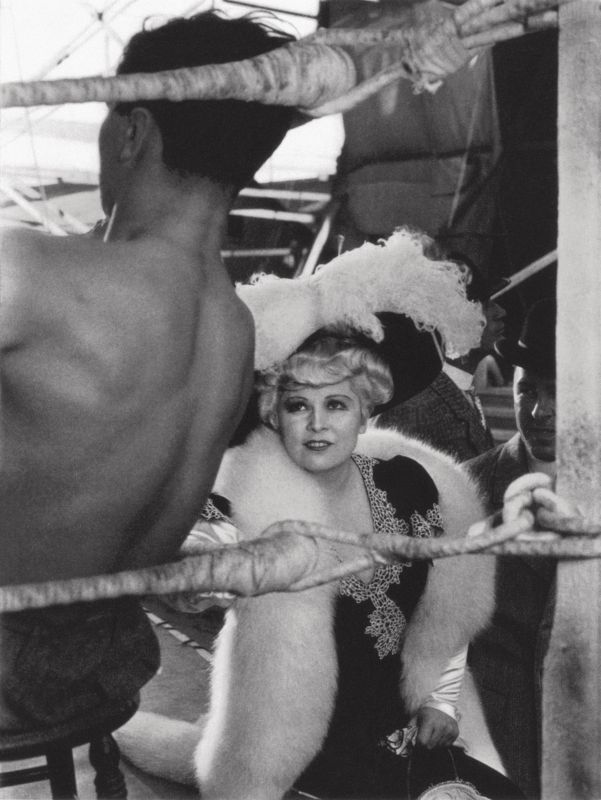 Mae West admires a boxer on the set of “Belle of the Nineties” in 1934. Photo: by George Hoyningen-Huene/Conde Nast via Getty Images

September 1934: BELLE OF THE NINETIES is released.

1935: West is the highest paid woman in America, and the second highest paid person (behind William Randolph Hearst).

March 1936: West signs contract with Emanuel Cohen after a series of arguments with Paramount executives.

July 7, 1937: Under oath in court, West finally admits her marriage to Wallace.

December 12, 1937: West guests on the Chase and Sanborn Hour with Edgar Bergen and Charlie McCarthy; her Adam and Eve sketch with Don Ameche creates furor and causes her to be effectively banned from radio for many years.

January 1938: EVERY DAY’S A HOLIDAY opens and becomes her first box office failure.

February 1940: MY LITTLE CHICKADEE is released.

Fall 1941: West meets Reverent Thomas Jack Kelly who will become her spiritual counselor until his death in 1960. 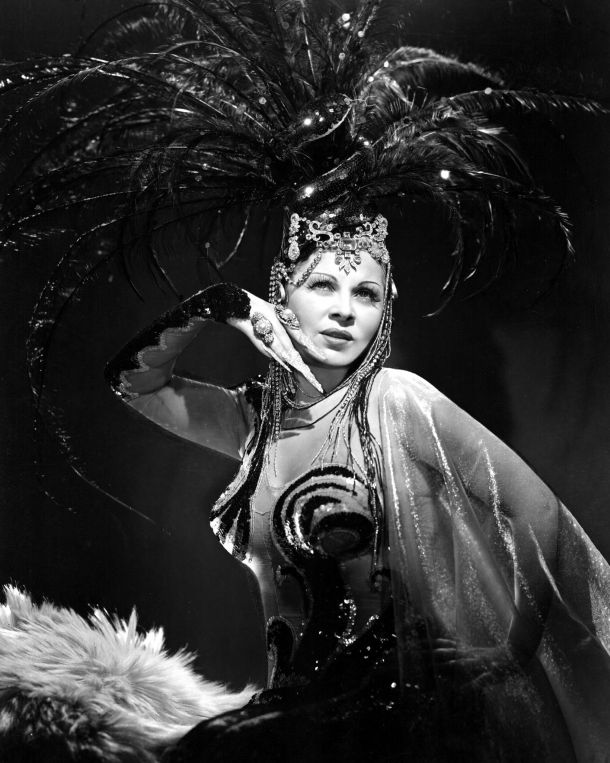 Mae West in her film “The Heat’s On.”

August 2, 1944: CATHERINE WAS GREAT premieres at Shubert Theater (playing until January 13, 1945); West then tours with the production.

May 16, 1946: RING TWICE TONIGHT opens in Long Beach, CA, before a cross-country tour; title is changed to COME ON UP.

September 11, 1947: West sails to England to begin a successful production of DIAMOND LIL (until May 1948).

January 5, 1950: West is Perry Como’s guest on the Chesterfield Supper Club radio show; she and Como combine talents on the “Comeo and Juliet” sketch.

July 27, 1954: West opens her muscleman nightclub act in Las Vegas; she performs the routine until 1959.

1955: THE FABULOUS MAE WEST is recorded on the Decca label.

November 1957: Publisher of CONFIDENTIAL magazine is fined for printing libelous articles about West and other stars.

March 26, 1958: West sings a duet of “Baby It’s Cold Outside” with Rock Hudson on the Academy Awards show.

1959: GOODNESS HAD NOTHING TO DO WITH IT, West’s autobiography, is published by Prentice-Hall.

October 1959: West is interviewed by Charles Collingwood about her autobiography for “Person to Person”: the show is considered too controversial for broadcast and is never aired.

March 1960: West appears on the Red Skelton Hour in a parody of the controversial “Person to Person” interview.

July 7, 1961: West’s SEXTETTE premieres in Chicago; production is plagued by West’s laryngitis and the death of Alan Marshall.

April 1962: West appears at the Friar’s Club Roast of Harry Richman in Los Angeles; she is the first woman guest at the club.

September 1964: West is hospitalized and diagnosed as diabetic; she suffers a mild heart attack.

June 1966: West fights the publication of THE WIT AND WISDOM OF MAE WEST.

1970: MYRA BRECKINRIDGE is released; West attends the world premiere at the Criterion Theater in New York on June 24.

November 1970: West is selected as the “Sweetheart of Sigma Chi” by USC fraternity.

May 12, 1977: West receives the Ruby Award from AFTER DARK magazine and appears in person at the award banquet.

Full Episode | Mae West: Dirty Blonde
Did Mae West really say, “Come up and see me sometime?” The story of one of Hollywood’s most famous quotes.
She Was No Angel: 8 Mae West Quotes That Will Get Your Blood Flowing
Clip | Why Didn’t Mae West Keep Up with the Latest Fashions?
Clip | How Madonna May Have Been Influenced by Mae West
Clip | Without “Talkies” There Would Be No Mae West
Clip | The Mae West Film that Helped Save Paramount Pictures
Clip | Mae West Made this “Insane” Film in Her 80’s
Fashion Advice From Mae West: More is More
The Time Mae West Spent Eight Days in Jail
Need Advice? Try Our Mae West Fortune Teller.
Four Ways Hollywood Legend Mae West Inspired Drag Queen Culture
Directors’ Statement | Mae West Left a “Legacy of Empowered Female Sexuality”