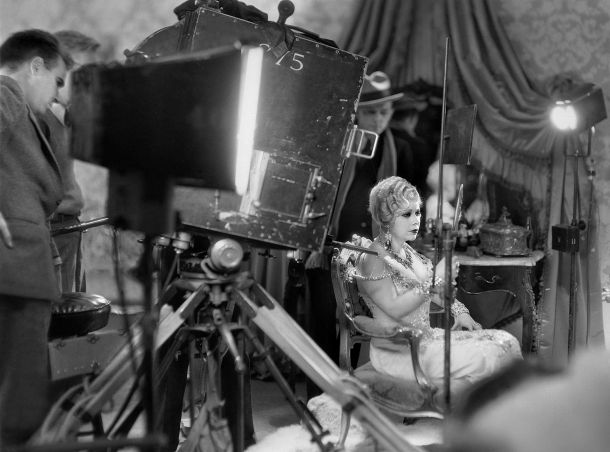 Mae West checks her appearance on the set of She Done Him Wrong, 1933. Photo: Alamy Stock Photo

I created a kind of twentieth century sex goddess that mocked and delighted all victims and soldiers of the great war between men and women. I was their banner, their figurehead, an articulate image, and I certainly enjoyed the work.

Mae West achieved great acclaim in every medium of entertainment that existed during her lifetime, spanning eight decades of the twentieth century. A full-time actress at seven, a vaudevillian at 14, a dancing sensation at 25, a Broadway playwright at 33, a star of the silver screen at 40, a Vegas nightclub act at 62, a recording artist at 73, a camp icon at 85 – West left no format unconquered. She possessed creative and economic powers unheard of for a female entertainer in the 1930s and still rare today. She had almost no formal schooling, yet she wrote plays, movies and novels featuring complicated leading women who upended traditional ideas of femininity, social conventions, and class hierarchy. From her first produced work, she inspired heated debate, censorship, arrest, and even the passage of a new law, as politicians, watchdog groups and religious leaders struggled to define how much guidance was appropriate to protect the public from provocative entertainment. Unique in American culture, she created and embodied a character – the unrepentant sinner, the bad girl made good, the ‘girl who lost her reputation and never missed it’ – who upended traditional conventions of gender, class, and age, and our collective vision of what the American woman should be.

There is no other Mae West. She is an institution, a living legend, as much a part of the American folklore as Paul Bunyan or Tom Sawyer or Babe Ruth.

Mae West’s life as a performer began, fittingly, at the dawn of the twentieth century – a time when many forms of leisure, including the theater and vaudeville, were witnessing the emergence of a female audience. Her unique style was evident even at her first amateur show: a seven-year-old-girl in a sweet pink satin dress and large picture hat, wriggling suggestively while growling men’s vaudeville songs in a deep, rough voice. Doted on by her mother, a onetime corset model from Bavaria, hardened by her father, a former bare-knuckles brawler, “Baby Mae,” as she billed herself, soon left school to join a local theater troupe, playing nightly on the ten-cent stages that dotted working-class Brooklyn.

In 1913, as the first national suffrage parade was taking place in Washington, DC, West was debuting her solo comedienne act on the Keith vaudeville circuit. Absorbing many different types of performance – African American female blues singing, white vaudeville “cooch” dancing, extravagant female impersonation – West synthesized the influences to create something new, and difficult to classify; early reviewers labeled her combination of ragtime songs, lascivious dance moves and mimicry a “nut act.” But she garnered attention as one of the best known performers of the “shimmy” dance, a sexually charged dance craze where she would “shake her chemise” to the delight of the audience.  She soon clawed her way to Broadway, where she rewrote the dialogue in her small roles to be funnier, sexier, bawdier – truer to the persona she had been cultivating.

The rapid social and political changes of the 1920s created opportunities in New York: for new ideas, new artists, and new subject matter. What might have been unthinkable only a few years earlier was suddenly not only tolerated but encouraged, and it was into this creative space that West first ventured as a playwright. Five years after Margaret Sanger founded the American Birth Control League, West wrote a starring vehicle for herself in 1926 that presented her idea of a modern, liberated woman. Written under the pseudonym “Jane Mast,” Sex was a tour de force of humor, vulgarity and marketing savvy. The show ran to ten months of packed houses, playing to 325,000 titillated theatergoers – until enraged moralists succeeded in having West and twenty other cast members arrested. Following a highly publicized trial, West was convicted of “corrupting the morals of youth and others,” and was sentenced to ten days in jail. West recognized the value of the publicity, commenting to a reporter, “I expect this will be the making of me.”

West’s next role would come to define her: Diamond Lil, the story of a Bowery prostitute-turned-saloon-singer with a knack for manipulating men. The popular flapper style of dropped waists and short hemlines was unflattering to West’s curvy figure, so she set her story in the 1890s and modeled her look on her mother’s idol Lillian Russell, pouring herself into a long gown with a low bodice and a huge hat. Diamond Lil was an unqualified smash hit: critics loved it as much as they hated Sex. On the strength of the play’s success, Paramount Pictures offered West a contract, and she became a movie star at the tender age of 38, essentially saving the struggling studio from bankruptcy at the height of the Depression. West was given her own production unit, with wide leeway to rewrite her lines, redefine her roles, and cast her leading men – an unheard-of degree of power at a time when female stars had little say in what parts they played or how their image was molded.

Making five films in four years, West’s screenplay heroines were all essentially a variation of Diamond Lil: the former prostitute made good. Her movies set attendance records at theaters across the country and made her one of the most famous women in America. But her libertine attitude and unapologetic embrace of sex as pleasure also brought the wrath of the Production Code censors, who saw West as a threat to traditional middle-class values – especially at a time when the country was barely holding itself together, and some held it was a lack of moral virtue that had brought the nation to its knees. The censors began editing her screenplays with heavy strokes, obliterating her saucy dialogue and rendering jokes senseless. For a while, West was able to work around it with double entendres and suggestive intonations, but the censors began rejecting finished films and ordering costly reshoots with their own story changes. The films grew dull; audiences grew bored. Ticket sales fell. Moviegoers opted for a bubbly Shirley Temple over a neutered Mae West. The Hollywood Reporter labeled West “box office poison,” and her film career was over.

In the booming postwar era, the burgeoning mecca of entertainment in the desert, Las Vegas, offered Mae West a chance to flout convention without fear of censorship. At the new Sahara Hotel, West sang her old songs, recited her old lines (and some new, raunchier ones) – but now with a coterie of oiled-up bodybuilders in loincloths as her backup men.  The glitzy, over-the-top atmosphere was the perfect setting for West’s brand of racy humor, and the show was a great success with the visiting tourists and retirees who remembered West fondly from her film heyday two decades earlier.

After her Vegas run ended, West corralled her favorite muscleman, a former Mr. California thirty years her junior, and returned to Beverly Hills. Other than occasional television appearances – including an exceptionally popular episode of Mister Ed – West mostly kept to herself. She rarely went out during the day, to avoid the aging effects of the sun. She insisted to interviewers that she could still pass for 26, and rejected the role of Norma Desmond in Sunset Boulevard, as well as roles in Pal Joey and various Fellini movies – roles that she felt would ridicule her persona and undermine her identity as a comedic sex symbol. She would eventually make two more films, under the condition that she have creative control and could rewrite her lines as she saw fit. Both films flopped; audiences were uncomfortable with the spectacle of an older woman with a voracious sexual appetite. By the 1970s, sex was no longer a taboo subject – but in presenting a post-menopausal woman with a powerful libido, West had found one last line audiences were still not ready to cross.

When Mae West died at 87, the Los Angeles Times eulogized her as the “epitome of witty sexuality” and a “paradoxical American original.” West left an indelible impression on America’s cultural landscape, and a filmic legacy of empowered female sexuality which opened the door for countless contemporary performers. And yet today, the battles West fought are still being waged in all aspects of American life.

Full Episode | Mae West: Dirty Blonde
Did Mae West really say, “Come up and see me sometime?” The story of one of Hollywood’s most famous quotes.
She Was No Angel: 8 Mae West Quotes That Will Get Your Blood Flowing
Clip | Why Didn’t Mae West Keep Up with the Latest Fashions?
Clip | How Madonna May Have Been Influenced by Mae West
Clip | Without “Talkies” There Would Be No Mae West
Clip | The Mae West Film that Helped Save Paramount Pictures
Clip | Mae West Made this “Insane” Film in Her 80’s
Fashion Advice From Mae West: More is More
The Time Mae West Spent Eight Days in Jail
Need Advice? Try Our Mae West Fortune Teller.
Four Ways Hollywood Legend Mae West Inspired Drag Queen Culture
Mae West Biographical Timeline