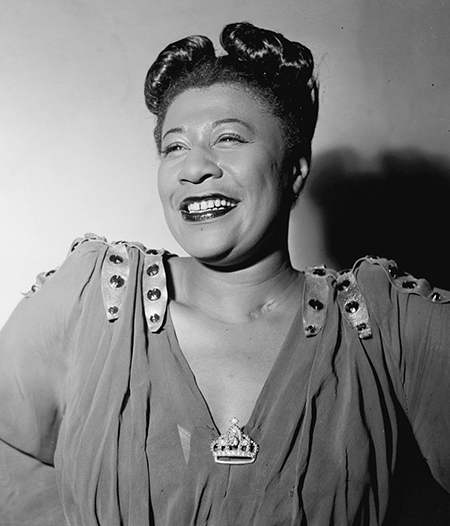 Her first dream was to be a dancer. Growing up in New York, she was inspired by “Snake Hips” Tucker, studying his serpentine moves and practicing them constantly with friends. Then, one fateful night at the Apollo Theater in 1934, the headlining Edwards Sisters brought down the house with their dancing. Amateur Hour began immediately after, and a 16-year-old Ella Fitzgerald stepped on stage, but was too intimidated to dance. Instead, she sang “Judy,” silenced the awestruck crowd, and won first prize. It was the beginning of one of the most celebrated careers in music history.

Born in Newport News, Virginia in 1917, Ella Fitzgerald moved with her mother to New York after the death of her father. Living in Yonkers, Fitzgerald attended public school, where she sang in the glee club and received her musical education. After her early success at the Apollo, and as a popular performer at a number of other amateur venues, Fitzgerald was invited to join Chick Webb’s band. Within a short while she was the star attraction, and had made a number hits including her trademark “A-tisket, A-tasket” (1938). After Webb’s death in 1939, Fitzgerald led the band for three years.

During her time with Webb’s band, Fitzgerald recorded with a number of other musicians, including Benny Goodman. By the time she began her solo career in the mid-1940s, she was a well-respected figure throughout the music industry. Her vibrant and energetic voice showed an exceptional range and control. Performing with “Jazz at the Philharmonic,” her popularity grew beyond the music world. Throughout the 1950s and 1960s, she continued to perform as a jazz musician, but concentrated primarily on popular music. Rivaled only by Frank Sinatra, her recordings of work by Cole Porter, Ira and George Gershwin, and Rogers and Hart were incredibly successful.

One of the early “scat” performers, Fitzgerald found a place among the growing jazz innovators, making recordings with such greats as Billie Holiday, Duke Ellington, and Louis Armstrong. Her true genius, however, was not formal innovation or deeper expression, but artistic renderings of the enthusiastic songs of her time. “I’m very shy, and I shy away from people,” Ella once said. “But the moment I hit the stage, it’s a different feeling. I get nerve from somewhere; maybe it’s because it’s something I love to do.” More than anything, it is this love of performing that won her the hearts of millions throughout the world.

By the 1970s, she was performing with a trio headed by pianist Tommy Flanagan, and regularly with dozens of different symphony orchestras. Though her voice was not what it had been, Fitzgerald’s enthusiasm and charisma continued to excite crowds well into the 1980s. After a successful appearance in the United Kingdom in 1990, she retired due to ailing health. Two years later President Ronald Reagan awarded her the National Medal of Honor. Suffering continued health problems, Fitzgerald spent the last few years of her life in her Beverly Hills home. On June 15, 1996 she died at the age of seventy-eight.

Of Fitzgerald, Johnny Mathis said, “She was the best there ever was. Amongst all of us who sing, she was the best.” From those early days on Harlem streets to the upper stratosphere of musical fame, Ella Fitzgerald’s life was the quintessential American success story. Through fifty-eight years of performing, thirteen Grammys and more than forty million records sold, she elevated swing, bebop, and ballads to their highest potential. She was, undeniably, the First Lady of Song. 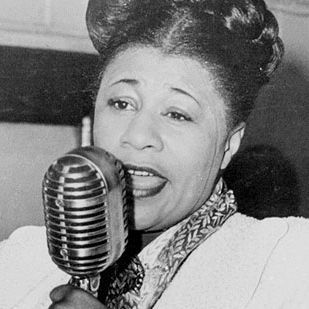