No Depression, a journalistic authority on Americana and roots music since 1995, ceased publishing magazines in 2008 and took to the web. Visit the No Depression Web site here. 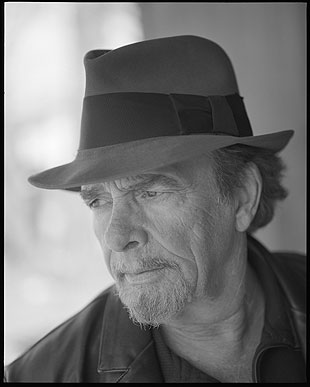 Just do not argue the point.

We are not in the mood. Johnny Cash is newly buried, George Jones doesn’t write his own material, Willie Nelson and Ray Price, Billy Joe Shaver and Bob Dylan are astonishing, towering figures. Dolly Parton comes darn close, there’s that.

But if you can listen to “Sing Me Back Home”, “If We Make It Through December”, and, say, “I Hate To See It Go” without being moved to the core of your soul…well, you’re beyond our repair.

Depending upon where you took your meals during the winter of 1969, that may prove a difficult pill to swallow. Those not yet born may have a hard time understanding what all the fuss was (and is) about: A generation later we’re still arguing about “Okie From Muskogee”, either the most or least important of Haggard’s 38 #1 country hits, and the most famous song he will ever write.

“Okie” made Merle Haggard the darling of Spiro T. Agnew’s silent majority and a lightning rod for the new left. It suggested a southern strategy to the Republican party that dramatically changed the political landscape. And it cemented the chasm separating country from rock, made that divide seem as impenetrable as the Berlin Wall. (It wasn’t, not even that permanent; Waylon, Willie, and a five-leafed weed eased tensions only a few years later.)

Already a major country star, Haggard became a household name, and, like Uncle Tom’s Cabin more than a century earlier, “Okie” clove that house in two. So politically charged were the times that even chitchat around the dinner table, ordinarily useful to keep family values on track, could erupt into screaming matches. Nightly. America was, then as now, in the midst of a bitter cultural war, and everything got serious when names like Richard Nixon, Martin Luther King and Abbie Hoffman came up in conversation. Haggard’s song inserted him into the middle of that discussion.

By the winter of 1969 there was no middle ground, and where you stood on “Okie” firmly established which side you were on, whether you wore sandals or boots, whether you thought hippies deserved to be beaten or honored for their opposition to the Vietnam War. Haggard’s next single, the patriotically charged “Fightin’ Side Of Me”, made clear where he stood.

No, it didn’t, actually.

The reaction to his latest single, “That’s The News”, smartly selected from his latest record, Like Never Before (on his own Hag Records imprint), suggests just how complex and mercurial a figure Merle Haggard has always been. And what a gifted artist he remains.

Sad truth to tell, Haggard has been old news for a while, at least in the pop culture wars. His last #1 country hit, “Twinkle, Twinkle Lucky Star”, charted in 1987. As with many of his peers, he was consigned to greatest hits packages and casino tours. And, like a gratifying number of his contemporaries, he rose from the slumber of premature retirement and proved to have rather more to offer, if to a smaller and more discerning audience.

Haggard’s 2000 release If I Could Only Fly, the first of his two albums for Epitaph…wait. Think about that: 31 years after “Okie”, Haggard was finally, unexpectedly embraced not simply by the rock world, but by one of its foremost punk labels.

The first record he gave Epitaph revealed a newly self-aware, mature, still brutally honest singer, a man still willing to write songs that cut precisely to the marrow of his own bones, an artist easy with his own legacy. If I Could Only Fly record managed little of the commercial impact of Johnny Cash’s four American albums. Nor did Roots (its 2001 follow-up), nor did The Peer Sessions, a sparkling homage (his latest among many) to his musical ancestors (released in 2002 on Audium). The work, however, was first-rate, and suddenly Haggard was back among us as a functioning artist.

And yet so potent is the memory of his celebrity, so deeply rooted is Haggard’s place on the right wing of our cultural imagination, that the fairly mild anti-administration protest of “That’s The News” landed him on the national news. Which only amplified the point of his song, though the talking heads ignored the obvious irony.

“Politicians do all the talking, soldiers pay the dues,” Haggard sings in his calm, resonant, world-worn voice. “Suddenly the war’s over, that’s the news.” That, combined with an editorial he posted on his website defending the Dixie Chicks (while simultaneously praising Toby Keith), led to great concern among certain of his longtime fans.

The first post on CMT’s message board reads: “I just saw Merle Haggard on Fox News discussing his new song…which is anti-Iraq war and will give great aid and comfort to the Sadamites who are killing our troops every day.”

And so it began.

Continue reading the complete essay on the No Depression Web site. 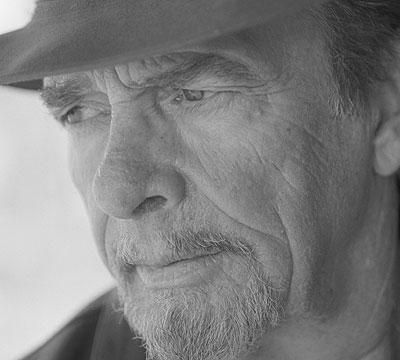