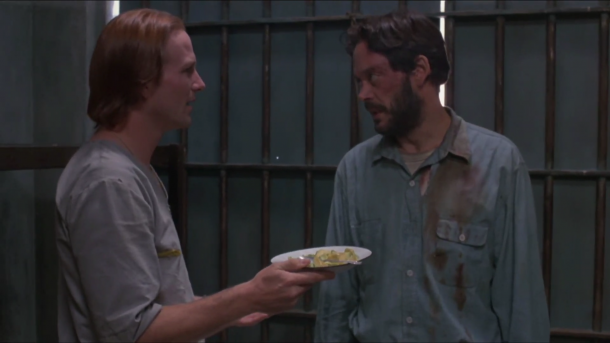 Raul Julia in Kiss of the Spider Woman.

Written by Tiffany Vazquez and originally published on PBS SoCal

Stream the entire episode of “Raúl Juliá: The World’s a Stage,” a special co-presentation of “VOCES” and “American Masters.”

One of the first things I noticed about my culture growing up was the amount of pride Puerto Ricans have. My parents took me to the Puerto Rican Day Parade in New York City every June, where millions of people would flock to Fifth Avenue to wave flags, play salsa, eat pastelillos, and dance in the streets. Seeing the Puerto Rican flag hanging from apartment windows, fire escapes, and lampposts is part of New York’s infrastructure at this point.

Why are we so proud? I’ve had to answer this question a few times to classmates and coworkers over the years. The answer is both simple and complex; like with many marginalized people, there is a celebration in the struggle. And Puerto Ricans know struggle. If you know anything about the history of Puerto Rico (or even current events), you know that Puerto Ricans have suffered incredible oppression at the hands of everything from colonization to natural disasters. Here’s a hard bit of truth: there was forced sterilization enacted in Puerto Rico and by 1968, about one-third of Puerto Rican women were sterilized. That’s why whenever one of us “makes it,” it’s something to celebrate because many of us never could. That’s why Raúl Juliá is someone to celebrate.

Watch this preview of “Raúl Juliá: The World’s a Stage,” a special co-presentation of “VOCES” and “American Masters” on PBS.

Like many, I first knew of Raúl Juliá through “The Addams Family” movies. His pitch-perfect performance as Gomez Addams has now become the blueprint for that character. I doubt Oscar Isaac would have been cast as the most recent Gomez in the upcoming animated film had Raúl not set precedence. It’s easy to overlook how good he is in that film because it’s so entertaining. But his flair for drama and years on stage in Shakespeare productions made him the perfect over-the-top, hyper-romantic, unrelenting, macabre, yet loving family man Gomez Addams.

Every choice in roles an actor makes says something about who they are as a person, whether intentional on their part or not. When you look at Raúl Juliá’s body of work, you’ll see incredible diversity of roles. This speaks to two things about Juliá — his unwavering desire to continually learn and the amount of talent he had in being able to play such a wide variety of roles. Everything from the stage production of “Bye Bye Birdie,” to “Sesame Street,” to films like “Mack the Knife,” “Kiss of the Spider Woman” and “Street Fighter” are all indicative of his range.

Stream the entire episode of “Raúl Juliá: The World’s a Stage,” a special co-presentation of “VOCES” and “American Masters.”

When you are part of a marginalized group, it can be exhausting to feel like you’re always fighting for your own rights. That’s why it’s important to know that someone out there with a louder voice and broader reach is fighting for you. Raúl has done that in his work and in his personal life. He spent years fighting against world hunger, contributing to The Hunger Project since its inception. He was also an avid supporter of the Puerto Rican Traveling Theater, which eventually launched the Raúl Juliá Training Unit, an afterschool program for Latinx and other youths of color throughout New York City. Juliá was also known to work with upcoming Puerto Rican filmmakers for little to no pay. You can’t search Raúl Juliá’s name on Al Gore’s internet without getting as many results for his humanitarian efforts as for his acting.

Clips from “Kiss of the Spider Woman” bring us into Raúl’s breakout film role in 1985.

Raúl Juliá might single-handedly be the best argument for the notion that one simply cannot separate the art from the artist. This is a person whose choices in both selecting roles and how he spent his free time were incredibly deliberate. In “Romero” he played Oscar Romero, one-time Archbishop of San Salvador, who went from having a political stance of non-involvement to full-fledged activism and gave his life to fight the overwhelming corruption in El Salvador. In “Kiss of the Spider Woman,” he played Valentin Arregui, another activist who sacrificed everything to ensure freedom for all, and someone who became open to love and human connection beyond conventional heteronormative standards. In this film it was striking to see an activist still be taught something about equality and the breaking down of institutional conventions. Juliá played Chico Mendes, the Brazilian labor-union martyr in the HBO film “The Burning Season.” Famously, his last major film was “Street Fighter,” which many considered a step down from his impressive body of work that is mostly comprised of stage roles. That kind of thinking often results in us praising the wrong people and overlooking the right ones. Juliá agreed to the role because his sons loved the Street Fighter video games, which is another reason why he was a deeply considerate father, but I also dare you to say he didn’t give an incredible performance as the evil general M. Bison.

Rita Moreno and Edward James Olmos talk about the discrimination Raúl Juliá faced in this clip of “Raúl Juliá: The World’s a Stage,” a special co-presentation of “VOCES” and “American Masters” on PBS.

Classic Hollywood stereotypes of Latinx people often include criminals and oversexualized “Latin lovers” and “spitfires.” Actors of Latinx descent are often described as “passionate” when terms like “spicy” are being avoided, but we’re not always that fortunate. What Juliá does with the stereotypical conventions of The Passionate Latino is nothing short of brilliant. Passion was in everything he did, and he showed the world what it meant to be a passionate entertainer, a passionate activist, a passionate family man, a passionate lover of the arts. Meryl Streep once said that everything about Juliá was big — his eyes, his smile, his voice; his presence. It is because of that passion that I have the honor to write about his legacy today. His passion went hand-in-hand with his pride in being Puerto Rican. Throughout his career, his unabashed Puerto Rican-ness was in every role that he took, and instead of it being a handicap, he used it to broaden every role he played. And while Raúl Juliá remains criminally underrated, his impact on Puerto Ricans both on the island and in the states is incalculable. Many ethnic groups were deemed unnecessary to society; Puerto Ricans very much included. So when I write that Raúl Juliá is vital in exemplifying the beauty, grace, talent, and power of Puerto Ricans despite oppression that deliberately sought to control our population, I am not exaggerating. So wave that flag, Boricuas. We are phenomenal.