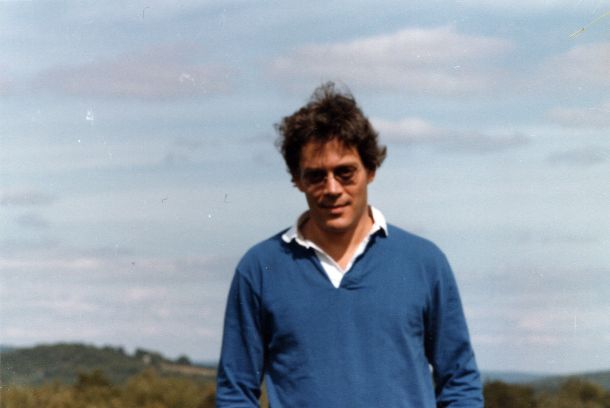 March 9, 1940
Raúl Julia was born in San Juan, Puerto Rico, and grew up surrounded by his tight-knit entrepreneurial family. He turned heads in his school performances, from nativity scenes in kindergarten through his roles in classic Spanish plays at Colegio San Ignacio, the Jesuit boys’ high school he attended.

After graduating from San Ignacio, Raúl headed to New York himself to become a student at Fordham University, trying out the traditional path even as his desire to be an actor still burned.

April 9, 1960
His younger brother, Rafa, was killed in an automobile accident at the age of 17. Devastated, Raúl returned to Puerto Rico to take care of his grieving parents and two younger sisters while he finished up college at the University of Puerto Rico. He sang in the university choir and also with a group called the Lamplighters. He took to the stage once again in Bye Bye Birdie at the Teatro Tapia, where his undeniable talent was still evident.

1963
Raúl mounted a variety show at the Hotel El Convento – one night the show happened to have the American actor Orson Bean in the audience, who was so impressed that he introduced himself backstage and advised Raúl to move to New York City for more opportunity.

1964
Raúl moved back to the Big Apple and began studying acting with legendary coach Wynn Handman. Enduring the classic New York actors’ struggle, Raúl embarked on a series of odd jobs, including selling magazines door-to-door and pens by the phone. With barely enough money for rent, Raúl auditioned countless times, in search of a big break.

In the years that followed, he worked with several theater organizations, including the Puerto Rican Traveling Theater and Teatro en la Calle, which brought classical performances to the streets of NYC.

1971
Raúl appeared in his first film and TV roles, including Panic in Needle Park, Been Down So Long It Looks Like Up To Me, and as Rafael on Sesame Street.

1971-1972
Under the wing of his newfound mentor Joseph Papp, Raúl starred in his first breakout stage role as Proteus in the musical version of Two Gentlemen of Verona at the New York Shakespeare Festival. The show then moved to Broadway, and Raúl received his first Tony nomination for Lead Actor in a Musical. During the run in 1972, Raúl famously would run off the stage on Broadway and take a car over to the Delacorte Theater in Central Park, where he played Osiris in the last act of Hamlet.

1973
Raúl starred as a charismatic Edmund the Bastard opposite James Earl Jones in King Lear.

1975
Raúl starred in the musical Where’s Charley, for which he received a second Lead Actor Tony nomination.

1976
Raúl became involved in the newly formed organization The Hunger Project and remained an active member for the rest of his life. THP’s mission was to end hunger worldwide by the end of the century – a lofty goal perhaps, but as Raúl argued, “we have to try.” He personally raised millions of dollars to end hunger, and he practiced what he preached, donating food every month to food banks and frequently fasting in solidarity.

Raúl was passionate and active about this and many other pro-social causes at a time when celebrities raising their voices was not a common thing.

1977
Raúl’s turn as Mack The Knife in Richard Foreman’s experimental version of Threepenny Opera at Lincoln Center earned him a third Tony nomination. His image in the iconic bowler hat was plastered all over New York City, catapulting him to a new level of theater success.

1978
Raúl starred opposite Meryl Streep in a legendary run of Taming of the Shrew, still remembered as a star-making turn in New York theater history for both of the young actors.

1979
Raúl played Othello for the first time, opposite Richard Dreyfuss as Iago at Shakespeare in the Park.

1981
Raúl starred in Francis Ford Coppola’s One From The Heart.

1982
Raúl starred as film director Guido Contini in Nine, the musical adaptation of the Fellini film 8 ½. The role earned him another Tony nomination for Lead Actor. Notable film roles this year include The Escape Artistwith Desi Arnaz, and as Kalibanos in Paul Mazursky’s film adaptation of the Tempest.

1985
Raúl achieved a new level of critical success and attention with his co-starring role in Kiss of the Spider Woman opposite William Hurt and Sonia Braga.

1986
Raúl had a featured role in his friend Marcos Zurinaga’s La Gran Fiesta– Raúl plays a poet who delivers a powerful décimapoem to poke fun at the elite aristocracy in Puerto Rico.

1988
Raúl starred opposite Richard Dreyfuss in Moon Over Parador, and opposite Mel Gibson and Michelle Pfeiffer in Tequila Sunrise.

1989
Raúl played Archbishop Oscar Romero in the film Romero, a role he was deeply committed to both as an actor and as a humanitarian. Years later, inspired by the role, Raúl traveled to El Salvador as part of a delegation monitoring the U.N. supervised elections.

1991
Raúl truly became a household name for his role as the comically quirky patriarch Gomez Addams in the celebrated film adaptation of The Addams Family. The film and its sequel were commercial winners that remain classics to this day.

He also was Othello for the second time at Shakespeare in the Park, starring opposite Christopher Walken in an acclaimed production. That same year, he and Merel paid for a full-page ad in the New York Times urging people to contribute to ending world hunger by the year 2000.

1994
Raúl starred as the iconic Brazilian humanitarian Chico Mendes in The Burning Season, for which he earned a Golden Globe, an Emmy, and a SAG Award. He also appeared as arch-villain M. Bison in Street Fighter, adapted from the popular video game, and his final work was in the TV movie Down Came A Blackbird alongside Laura Dern.

October 24, 1994
Raúl died at the age of 54, a week after suffering a stroke due to complications from the stomach cancer he had been battling for three years. The shocked acting community mourned the passing of one of their brightest lights.

1997
Merel Juliá co-founded the National Hispanic Foundation for the Arts (NHFA) along with Jimmy Smits, Sonia Braga, Esai Morales, and Felix Sanchez. Annually, the NHFA presents the Raúl Juliá Award for Excellence to an individual or organization that most advances the foundation’s mission to promote the next generation of Latinos in entertainment – this is one of several awards given out annually in Raúl’s name, championing the causes he was passionate about.