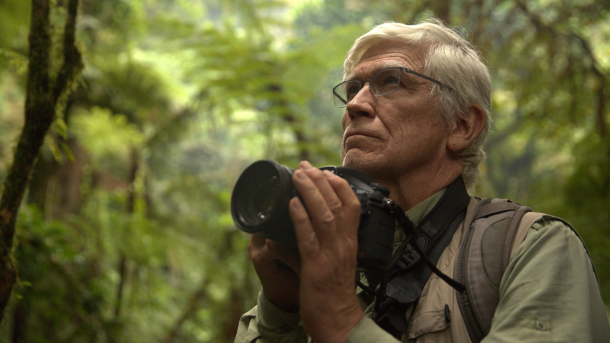 Dr. Russell Mittermeier, a world-renowned primate conservationist and scientific consultant on Nature: Primates. For the 50 years he has been studying primates, he has been on a mission to spot all 79 genera of primates, which has been accomplished. Credit: Stuart Dunn, ©BBC

“Primates: Protecting Primates” is the third and final episode of NATURE’s mini-series “Primates.” The series finale focuses on the scientists making groundbreaking discoveries to safeguard the future of primates. One of the scientists featured is Dr. Russ Mittermeier, Chief Conservation Officer at Global Wildlife Conservation and Chair of the IUCN SSC Primate Specialist Group.

He has studied and observed primates in the wild for 50 years, and in 2019, he became the first person to see at least one species from every one of the 80 genera of primates that are known to exist. This is part of his ongoing effort over the past 20 years to stimulate primate ecotourism, and especially primate-watching and primate life-listing, based on a wildly successful birdwatching model.

On Wednesday, Nov. 18, before the premiere of the final episode, Dr. Mittermeier answered fan questions in a Reddit AMA. Below are some of our favorite questions:

All three episodes of “Primates” are now available to stream here or on the PBS Video app.

Certainly, there are some interesting cases of behavior changes in certain species of primates that have been observed over the past 70 years of primate research. One good example is the famous Japanese snow monkey, which learned to use hot springs in the coldest part of winter and to wash potatoes in the ocean.

There are quite a few. Taking the chimpanzee example a few steps further, I recently learned that they kill forest tortoises for food and actively hunt mandrills, a large and imposing primate in itself, for food, both in Gabon. Capuchin monkeys hunt some large animals like iguanas in Central America. Black spider monkeys in my study area in Suriname and other primates in other parts of the world eat bark and rotten wood, esp. in periods of food shortage. Some species of Lepilemur in Madagascar ingest their own feces to maximize nutrition. The list goes on…

What’s something NEW about primates that scientists have discovered in the last five years?

Some of the most interesting discoveries relate to primate tool use. Originally we thought that we were the only animal that used tools, supposedly a uniquely human trait. But over the years we have found that we are not that unique. Jane Goodall discovered chimps using modified twigs to catch termites decades ago, and one of the most interesting discoveries with chimps is the use of sharp sticks to spear bushbabies out of their tree holes Capuchin monkeys used rocks as tools to break open hard nuts, and the skill to do this needs to be learned and practices. There are actually some very nice examples of new discoveries among primates in the mini-series on primates.

Is monogamy the standard in primates? Or does it vary by species?

No, there is a great variety. Monogamy, polygamy, multi-male groups, female dominance in some species (esp. some lemurs).

How many known primate extinctions have there been in the last 200 years?

Fortunately, we didn’t lose any primate species or subspecies in the 20th century. This is an enviable record given that every other larger group of mammals lost at least one species or subspecies. In fact, we don’t know of any primate extinctions in the last 300 years and perhaps as long ago as 500 years. That said, there is one subspecies of red colobus from West Africa that may have now extinct and quite a few species that are Critically Endangered We have our work cut out for us.

Which [primates] were the hardest to find, and why? Is there any risk in tampering with their environments when you go to track them?

Some were extremely difficult. Allen’s swamp monkey, found in the floodest forests of the Congo Basin, might have been the most difficult. Very elusive because it is hunted, and you can’t really walk through these forests. Goeldi’s monkey, Callimico, is another tough one. It is found only in scattered, widely separated patches of forests in Western Amazonia, and was the last of the Neotropical primate genera that I saw in the wild.

If you are respectful of these animals and don’t do anything foolish, there shouldn’t be a great risk in searching for them. One has to be especially careful with the great apes, which are our closest living relatives and where there is consequently a risk of disease transfer. Have to wear masks at all times and keep your distance in such cases

What’s it like being near gorillas? I used to work with some folks from Uganda and they’d tell stories about how powerful gorillas are. Awe-inspiring, terrifying, or something else?

It is pretty amazing. They are huge, magnificent animals, and it is a wonderful experience to be close to them. I have now been with all but one of the species/subspecies of gorilla in the wild, including the mountain gorilla, Grauer’s gorilla, and the western lowland gorilla, missing only the very rare and elusive Cross River gorilla from the Cameroon/Nigeria border. I would say it is more awe-inspiring than intimidating, but it certainly gets the adrenalin flowing. Chimps I find more intimidating and unpredictable.

What’s your favorite genus of primate?

Good question. There are many that I really love, so it’s a hard choice. I guess I would have to say the Indri, a monotypic genus and the largest of the living lemurs. But the muriquis, genus Brachyteles, from the Atlantic forest region of Brazil are also high on the list, as are the very unusual short-tailed uakaris, genus Cacajao, from Amazonia.

I have always been fascinated by primates and also by reptiles. Growing up in the Bronx, Brooklyn, and Long Island in New York, I did have the opportunity to observe wild reptiles, but there aren’t a lot of wild primates in the northeastern United States. However, when I had my first opportunity to see wild primates in Guatemala in 1970, I was hooked, and shortly thereafter did my first field study of wild primates on Barro Colorado Island in Panama, focused on the mantled howler monkey. And my interest has continued and grown in the past 50 years.

What would you most like to tell us that no one ever asks about?

Doing the kind of work that I have done over the past 50 years is very gratifying because you really feel that you are making a contribution. But it also requires a lot of sacrifices in terms of family, and sometimes, health. I have been lucky in terms of health, although I have had a wide variety of tropical diseases, none of them have killed me yet.

All that said, it has been worth it, and given the opportunity, I would do it all over again.

I am also fortunate in that two of my sons are both into the same business, one focused on bird and the other on plants