This piece comes to us from the Wildlife Conservation Society (WCS). 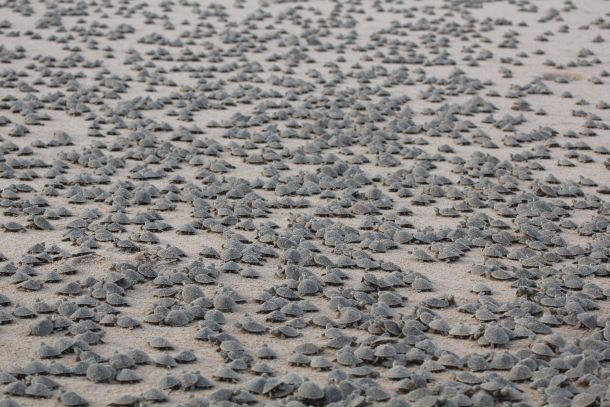 Roughly two months after the turtles nest, hundreds of thousands of hatchlings emerge from the sand and make their way to the river. Photo credit: ©WCS Brazil.

Conservation technology helps conservationists monitor one of nature’s most impressive spectacles: the nesting of giant Amazonian River turtles (Podocnemis expansa). This is the largest concentration of freshwater turtles in the world. Through the use of drones, flights are being conducted over their nesting sites on a river separating Bolivia from Brazil (Bolivians call it the Iténez, Brazilians the Guaporé). But how can technology help us conserve this species?

Every year, thousands of giant river turtles swim up the waters of the Iténez/Guaporé River, and between September and November lay their eggs on stretches of beach between Bolivia and Brazil. This nesting lasts between 20 and 30 days, as each female lays between 50 and 170 eggs per nest for approximately 30 minutes. Nesting occurs at different times of the day and the weather plays a fundamental role. 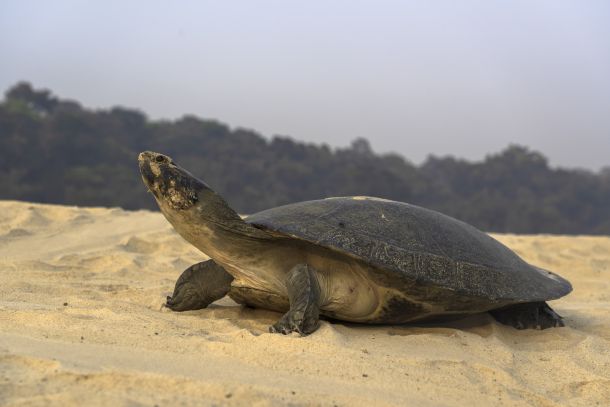 Each female lays between 50 and 170 eggs per nest. Photo credit: Marcos Amend/WCS.

Unfortunately, the population of this species has been drastically reduced because traffickers have taken advantage of this wonderful natural event to collect the eggs and trap the turtles for their meat, shells, and fat. With this decline, the turtles have become an endangered species in the Amazon, threatening the river ecosystem for which they play a vital role.

In recent years, several conservation strategies have been adopted. Among these is to manage, protect, and monitor the nesting beaches of the Iténez/Guaporé River. These activities are carried out for two months, from nesting to hatching of the eggs. 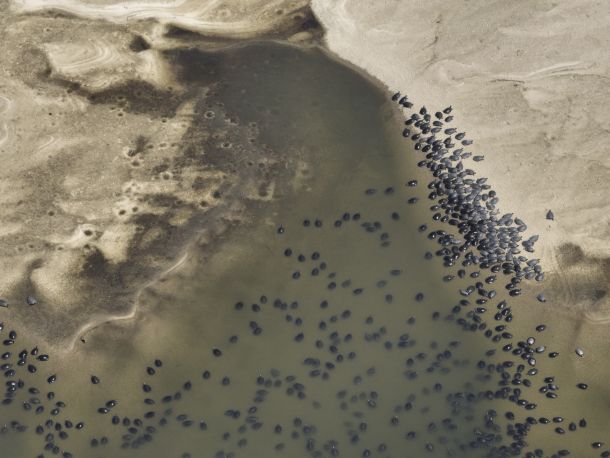 Every year, thousands of giant river turtles swim up the waters of the Iténez/Guaporé River to lay their eggs on stretches of beach between Brazil and Bolivia. Photo credit: Marcos Amend/WCS.

In Brazil, the Brazilian Institute of Environment (IBAMA) is fighting illegal trafficking with the support of the local NGO Ecovale. On the Bolivian side, residents of the indigenous community of Versalles in the Department of Beni protect the nesting beaches, which are part a Departmental Park in the Beni, the Iténez Forestry Reserve.

The Wildlife Conservation Society (WCS) supports these conservation efforts in different areas in Brazil and Bolivia by strengthening the management of protected areas, monitoring the turtle population, and supporting the control and observation of beaches. All these activities are part of an action plan for the conservation of this species that is currently being developed.

As part of that effort, and in the face of changes in the weather of the Amazon as a result of climate change, turtle monitoring has become a fundamental part of conservation, and estimating the number of females nesting in this area is critical. Thus, starting in 2021, we coordinated activities to use technological platforms to count the number of female turtles nesting on the beaches of this fabulous river.

Through programmed flights of drones equipped with visible sensor cameras and infrared cameras, we collected photos and videos of the beaches of the Itenez/Guaporé river during the nesting periods to have a first estimate of the number of females that spawn at these sites. It was possible to carry out this count with a visible camera during daylight hours. The amazing technology of infrared cameras allowed us to observe the egg-laying activity during the night as well, when there is little or no visibility. 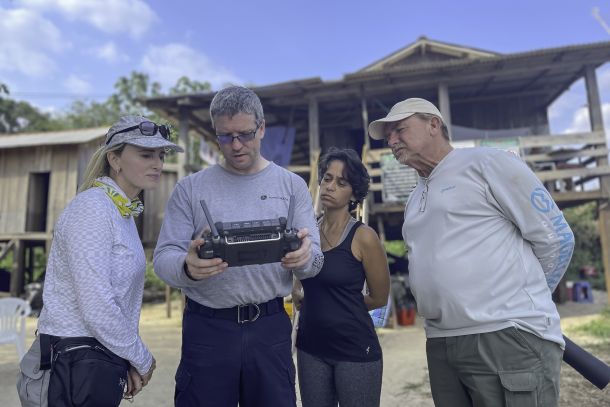 The use of drones is now helping conservationists to monitor the spectacular nesting of giant South American river turtles on the banks of the Iténez/Guaporé River. Photo credit: Marcos Amend/WCS.

The results are astounding. Thanks to processing the drone images with the use of spatial analysis software, we have estimated a population of approximately 80,000 turtles on the nesting beaches of this river (the peak was around 3,500 turtles per beach per night). These results confirm a positive conservation status for this area and highlight the importance of continuing to work for the conservation of giant river turtles and other species through the joint work of local communities, authorities, and NGOs found in the area.

While our work demonstrates that it is possible to use the technology for biodiversity monitoring, we are aware that further steps must be taken to make better use of it in the future. These steps are mainly: accurate design of overflights to obtain robust data on turtle numbers in different nesting areas, estimation of turtle body sizes, estimation of turtle biomass, behavior, and the use of artificial intelligence for a robust population estimate of this threatened species. 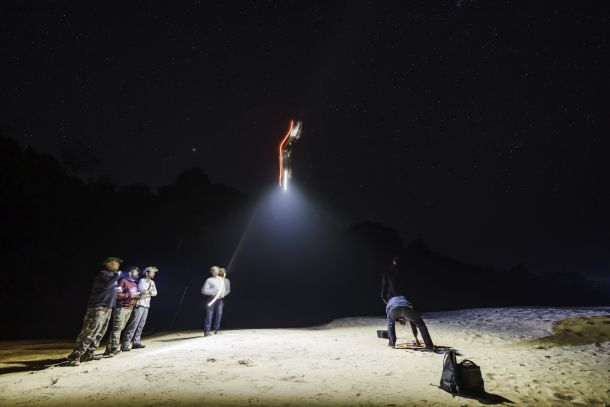 Infrared cameras allow the team to observe the egg-laying activity during the night as well. Photo credit: Marcos Amend/WCS.

Thanks to the results obtained through this joint effort, we are confident that there is exciting potential to use technology meaningfully for effective species monitoring that will grow with further exploration. This example of turtle monitoring with drones gives us a broader view of the applications of technologies for the near future, allowing us to do more with fewer resources. In a rapidly changing world, conservation and technology must go hand in hand for a common goal: the protection of nature.