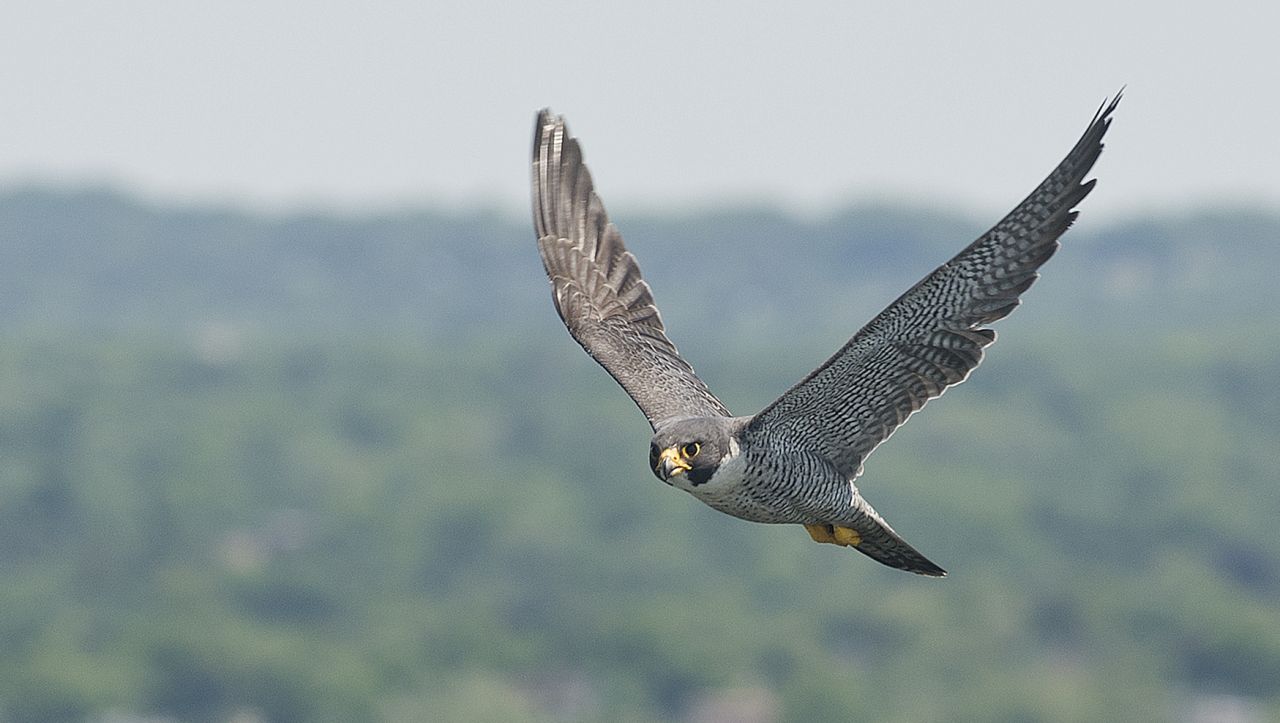 Editor’s note: The following excerpt is from the book “The Shark and the Albatross: A Wildlife Filmmaker Reveals Why Nature Matter to Us All” by filmmaker John Aitchinson. The excerpt details Aitchinson’s attempt to film the peregrine falcon in New York City with the help of Department of Conservation scientist Christopher Nadareski and other experts.

I have been asked to film New York’s peregrines for a program about urban wildlife, being made by a producer called Fredi. He dreams of filming a city peregrine hunting to feed its family, among the skyscrapers of Manhattan. It would be the ultimate proof that the falcons have adapted fully to life in the city.

Filming a peregrine hunting is one of the hardest things a cameraman can do. They dive at more than 300kph (up to 200mph), often from such a height that they are invisible to the naked eye. Just following a fast-stooping bird through a long lens is hard enough, never mind the difficulties of keeping it in focus, and to make matters worse they often travel so far that their stoops end out of sight.

That problem at least would be eased by filming from higher up. In the wild that’s only possible if you can find a convenient hill but in New York it’s easy. When Paul, the program’s researcher, reads out Chris’s list of peregrine nest sites, it sounds as though he is describing the city itself: there are several hospitals, skyscrapers overlooking Park Avenue, America’s tallest church, a detention complex and many bridges. They all share the thing most useful to us and the peregrines: elevation.

We are captivated by New York’s peregrines as soon as we step onto our first rooftop, which belongs to a building directly opposite the tall church. The male peregrine (called a tiercel) from the pair nesting on the church tower rides the wind up the vertical walls and passes us slowly, just beyond arm’s reach. The skin around his beak and eyes, and on his legs, is the same bright yellow as the taxis in the streets below.

He seems completely at ease in the upper air among the towers, where light bounces from building to mirrored building, dappling some like skin and banishing shadows from dark corners. He hardly glances at the city’s people and its cars crawling far below, as if they were sea creatures on the bottom of the ocean.

Matt, a peregrine expert, stands beside me, to help spot the falcons and their potential prey. Paul and Fredi station themselves with radios on different corners of the roof. Feathers swirl in bright eddies against its plain surface: the glinting wing feathers of a jay, flashing indigo and blue.

We stand near the edge with a wall of metal shutters at our backs. To our amazement, the female peregrine lands on it, less than twenty meters away. In the countryside, birds would be far more wary than this. She is larger than her mate and more heavily built. Her talons scratch a little on the metal as she rouses, opening her feathers for a shake, then preening them in the sun.

This pair have chosen well: from their nest behind a gargoyle they have clear views across Harlem and the Hudson River. Their neighbors are carved devils and animals: a winged demon on a throne rests his chin on his hand, contemplating several big cats and a wicked pelican. All of them leer at us across the void. The tiercel perches on a stone lion, gripping its ear with his long bird-catching toes. His front is pale and streaked while his back is a subtle two-tone grey, like the carbon-fiber housing of the camera. With his white mask and black helmet he looks like an assassin: one whose home is a church. He stands as perfectly still as the gargoyles and stares intently across the river. 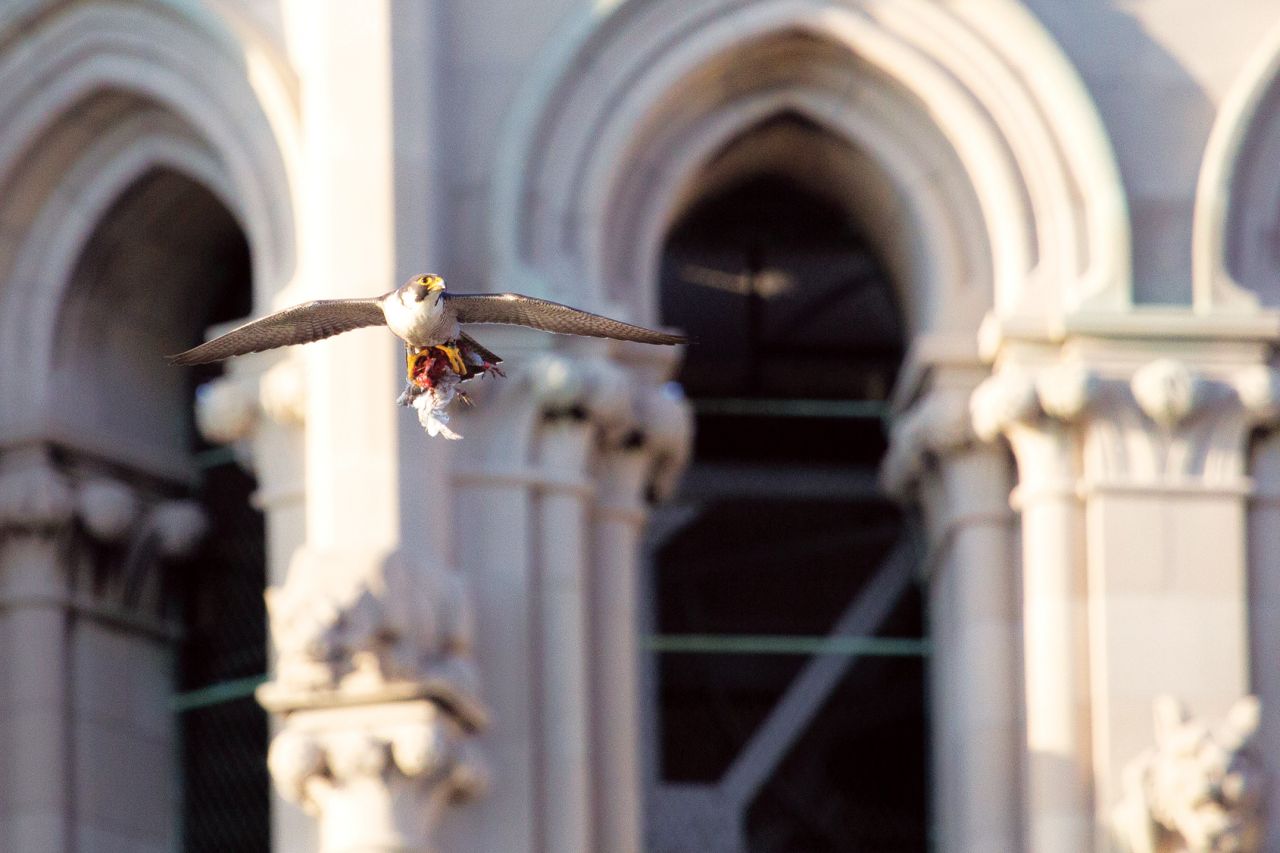 A peregrine falcon carries a pigeon in its talons. The bird nests near the Hudson River. Credit: John Aitchison.

This pair must be good hunters. We saw their five chicks yesterday, when Chris took us up the church tower to fit their bands. He had moved the young birds from the nest into a cluttered room, where elevator motors whirred. The female was so defensive of her family that when Chris went to lift the first chick, she flew at his face with her talons outstretched. Astonishingly he caught her calmly by her legs in the split second before she struck, then put her in a box where she would not harm herself while he worked. He joked that over the years he has ‘had the honor of multiple body parts being autographed’ by falcons’ talons. As soon as her chicks were back in the nest, Chris released the female and she settled at once.

From our filming position on the roof we can see messages drifting up from the streets. They are printed on helium balloons and they are always the same: Happy Birthday! Usually the birthday balloons come in ones or twos but this morning forty pass together, hinting at a day’s lost profits or a party spoiled. They separate and drift among the buildings, rising over some and between others, revealing the air currents the falcons ride so effortlessly as they search for prey below them in the deep. It’s breezy down there too, where a bride struggles to control her billowing dress. Laughter rises above the sounds of traffic. So does bird- song from the park. The peregrines watch these other birds like hawks (of course) but they’ll be hard to catch as long as they stay close to the trees. The falcons watch the river too, where reflected light makes pat- terns on the surface like a leopard’s fur. While we wait, the shadow of a tall building creeps across the water: a gnomon in the largest of sundials.

The tiercel takes off and accelerates astonishingly quickly, pumping his wings. He has spotted the flicker of wings, catching the sunlight a kilometer away. Through the long lens I can see that it’s a grackle, flying above the river’s far bank, which is so distant that with my naked eyes I can’t even make out people. The grackle sees him coming and at the last moment dives into the trees. The tiercel returns to perch on a different gargoyle: a stone bird of prey, whose hooked beak and talons are just like his own, but it has flowers for its eyes. Beside him rows of stone saints gaze vacantly across Manhattan.