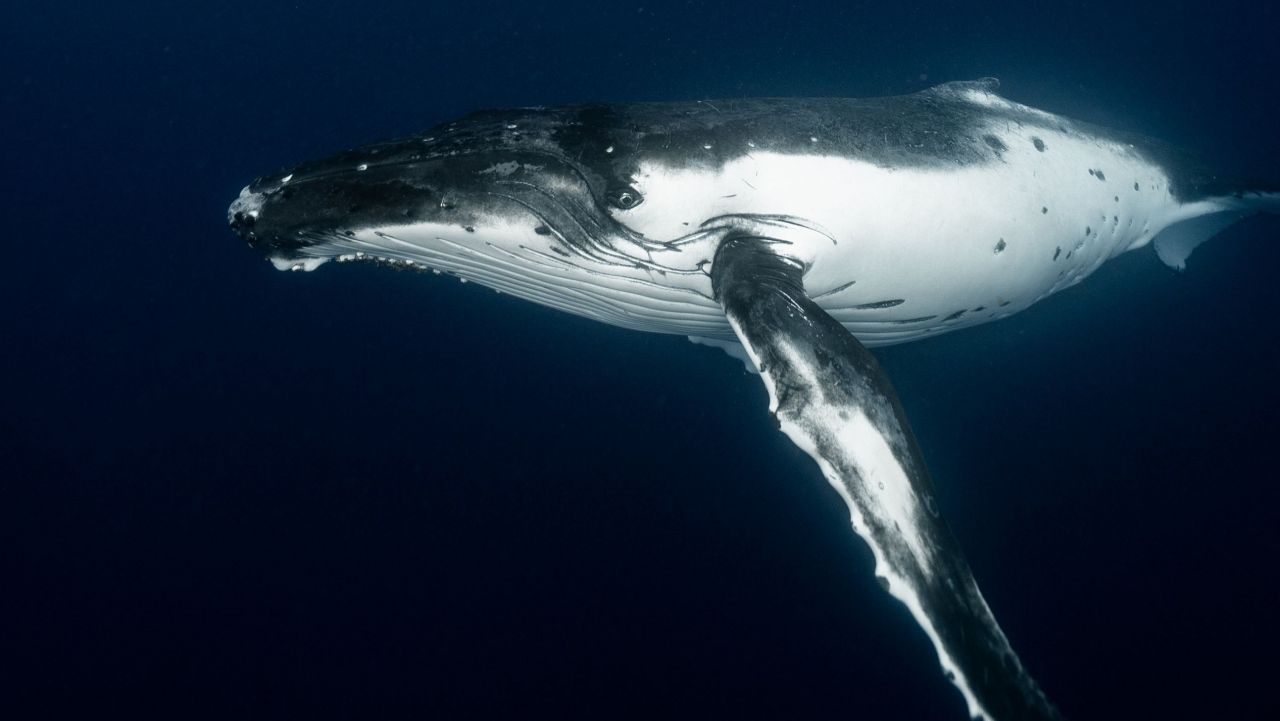 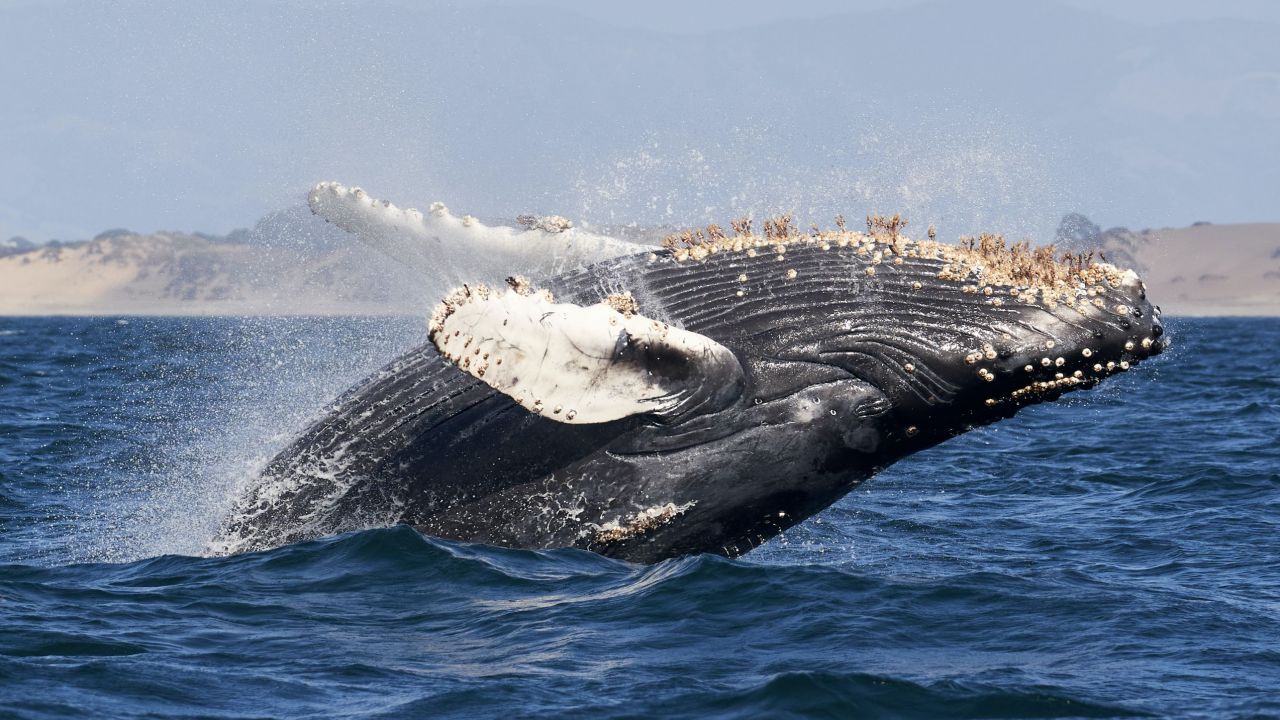 Humpback whales weigh up to about 40 tons and can reach up to 60 feet in length. Their flukes can be up to 18 feet in width.

The humpback whale is named for the distinctive hump on its back. They have a unique body shape, with long pectoral fins and a knobbly head. Inside their pectoral fins are the biggest arms on the planet. Their bodies are primarily black with some white on their pectoral find, bellies and the underside of their fluke, or tail. Their tail flukes are as unique as human fingerprints and can be used to identify individuals, thanks to their pigmentation pattern, shapes, sizes and prominent scars. 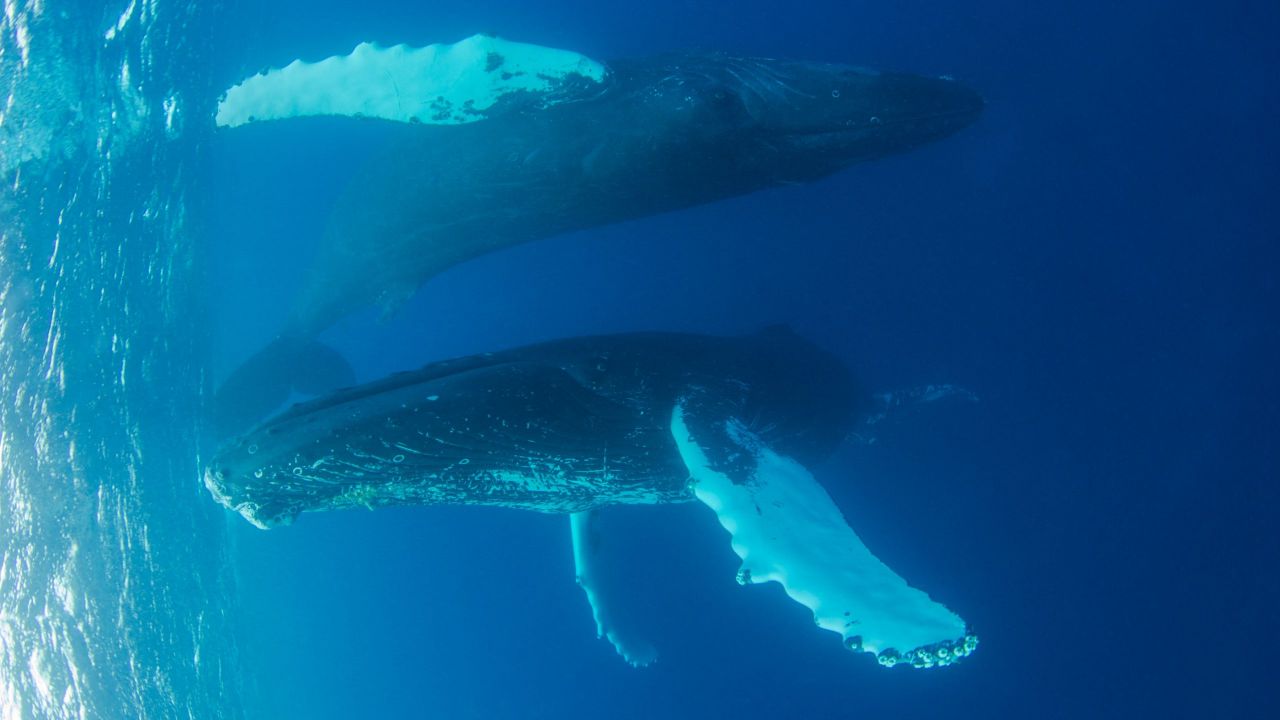 Humpback whales are baleen whales, meaning they are equipped with fibrous “baleen” plates in their mouth. They use these plates to filter out and consume quantities of krill, plankton, and crustaceans. During the warmer months, humpbacks spend most of their time feeding and building up blubber to sustain them throughout the winter.

Humpbacks have several techniques for herding and capturing prey, including the use of bubbles, sounds, the seafloor and their pectoral fins. One feeding method is called “group coordinated bubble net feeding,” which involves using curtains of air bubbles to condense prey.

Humpback whales can be found in oceans around the world. They are known to travel long distances during their seasonal migration, up to 5,000 miles between high-latitude summer feeding grounds and winter mating and calving areas in tropical waters.﻿ 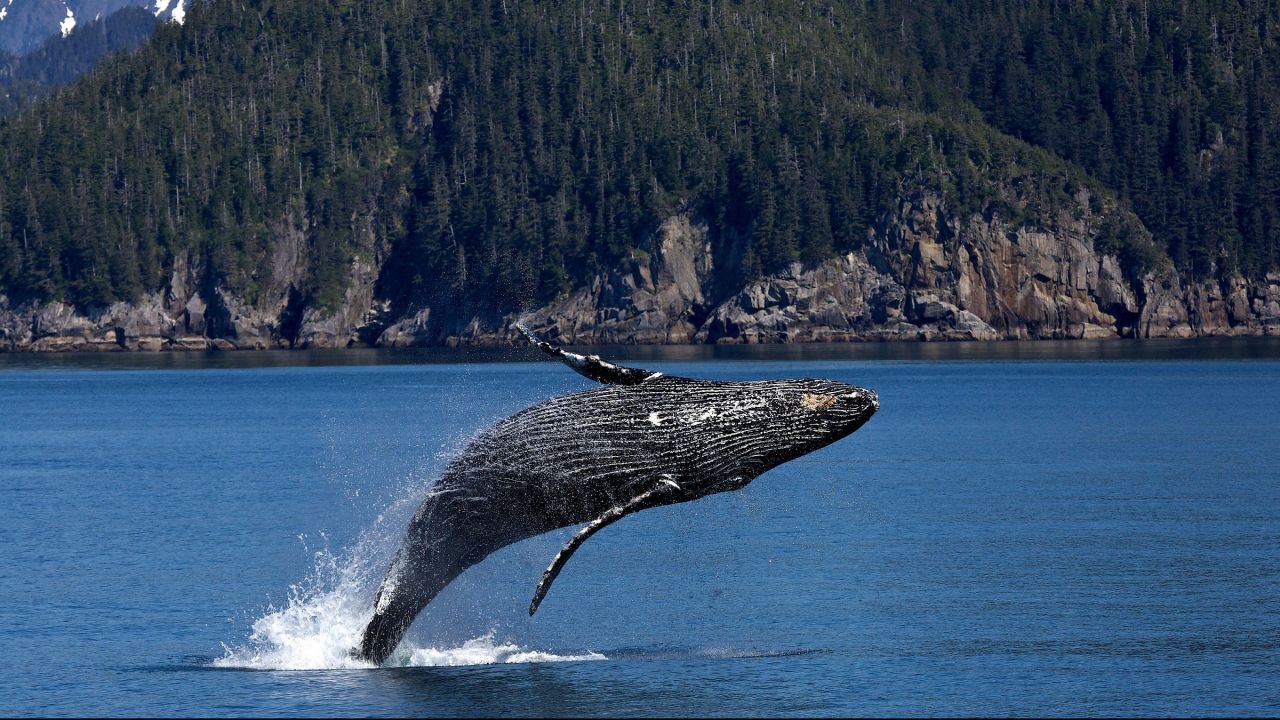 Humpback whales are polygamous, with both males and females having multiple partners. Mating and breeding typically take place in the winter in tropical waters. A male will trail either a lone female or a cow-calf pair, he is known as an “escort”. The male closest to the female is known as the “principal escort”, and he fights off the other suitors known as “challengers”.

After an 11-month gestation period, the female gives birth to a single calf. At birth, calves measure 13 to 16 feet in length. The calves stay with their protective mother for the first year of their lives before weaning. According to NOAA fisheries, while calves are not believed to maintain long-term associations with their mothers, they are more likely to be found in the same feeding and breeding areas as their mothers. They reach sexual maturity between the ages of 4 and 10 years. A female will typically birth a calf every 2 to 3 years, with some females reportedly having a calf annually.

Humpback whales normally associate in small, unstable groups. They are known to be highly active at the surface, performing aerial behaviors like breaching, tail slapping, and flipper slapping. While the cause of this behavior is unknown, there are several theories for their function including play, communication, parasite removal, and displaying excitement or annoyance.

Humpbacks are also widely known for their songs. Males especially are spectacular singers, producing complex songs that can last more than 15 minutes and may be repeated for hours. Scientists do not currently have a definitive reason for their songs, many theories exist. One theory is that their songs are a mating call. However, the recent data shows that the whales also sing while hunting for food and migrating along the coast. 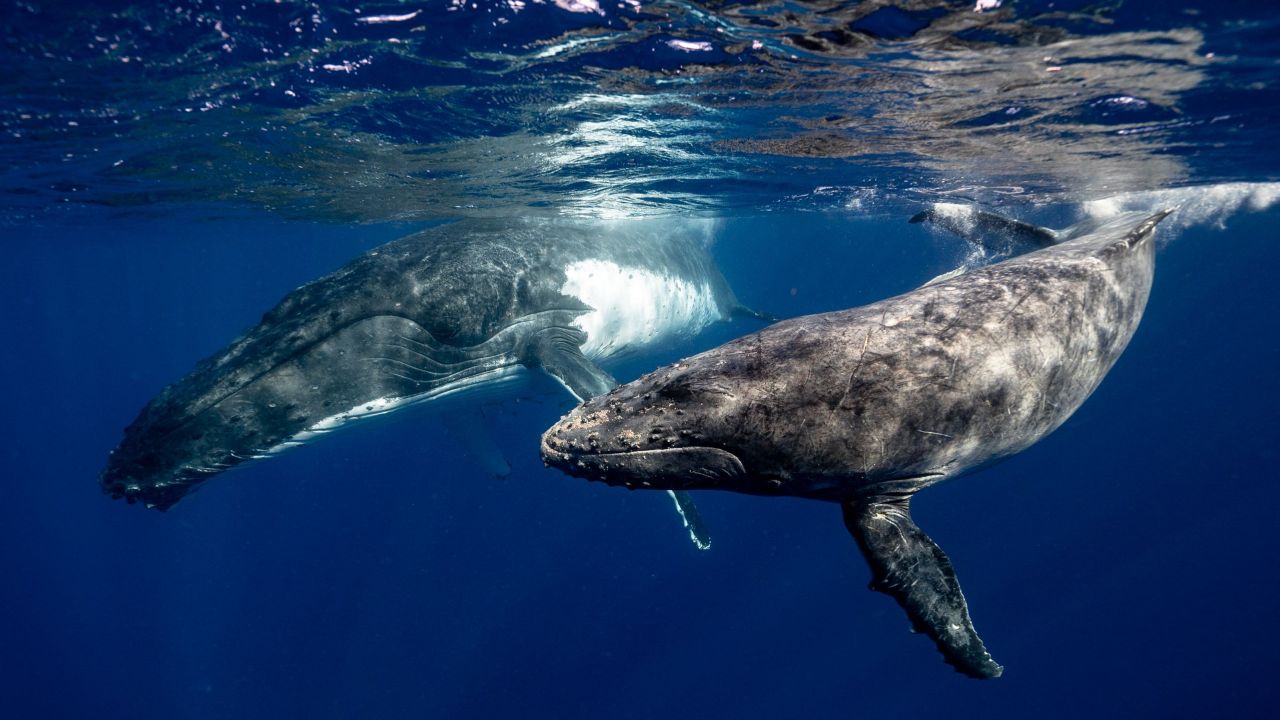 The lifespan of humpback whales is unknown but is estimated to be about 80 to 90 years.

The largest threats to humpback whales include vessel strikes, entanglement in fishing gear, vessel-based harassment, and climate change. Many of the threats to humpbacks are human-induced. Throughout their range, humpbacks are vulnerable to inadvertent vessel strikes, which injure or kill the whale. They are also at risk of becoming entangled in fishing gear. When entangled, the whale may be able to swim with the gear attached but may fatigue more quickly when swimming long distances. Whale-watching vessels and recreational boats are another threat to humpbacks as they can cause stress and behavioral changes in the whale. Humpbacks are a popular tourist attraction because they are often found close to shore and typically surface when active.

Climate change is another threat to humpbacks. However, the impacts on these whales is not yet known. Climate change’s impact on sea ice coverage, ocean temperature and prey distribution will likely have an impact on the species. For example, changing water temperature and currents could impact the timing of environmental cues important for navigation and migration. 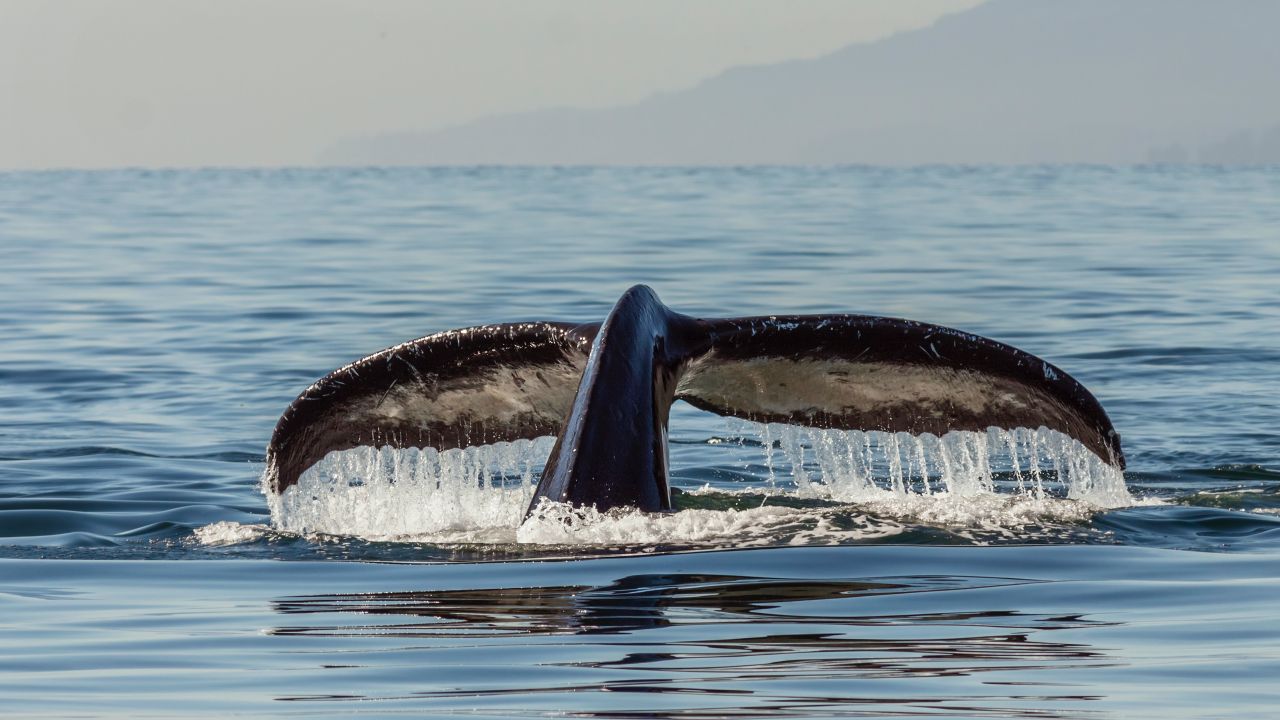 According to the IUCN’s Red List, humpback whales are listed as Least Concern. There are estimated to be around 84,000 mature individuals with numbers increasing.