The Bear Blog with Chris Morgan follows the journey of Chris and his crew during the production of NATURE’s Bears of the Last Frontier, coming in 2011. To learn more about this project, check out the Bear Blog introduction video.

For more behind-the-scenes photos from base camp, become a fan of NATURE on Facebook.

There’s nothing quite like coming back to your favorite place on Earth. I’ve been bringing people to the coast of Alaska to view brown bears for many years, and I’ve fallen in love with the majesty of this wild area — and with the giant brown bears that call it home. But this trip is a little different, and I can already tell it’s going to be an adventure to remember. 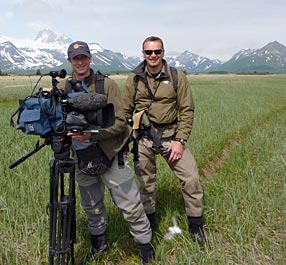 Joe and Chris on a bear trail in search of bears

I’ll be blogging several times about our experiences among the bears on the coast of Alaska, our first location for Bears of the Last Frontier, but this first field entry has to be brief as I am only within internet connectivity for 24 hours before heading into the wild once again. We’re here to film the bears in the early season — a busy time when they are ravenously hungry after emerging from six to seven months in their winter dens. It’s also a time of intense action as the bears pour from the surrounding mountains down to the coastal sedge meadows to court and mate. Situating ourselves in the middle of this action is the plan and it started with locating the perfect spot for our base camp.

We found the perfect location about 1.5 miles from the main sedge meadow where the bears usually gather to court each other during the breeding season. We were told that sometimes dozens of bears can be seen together at this time of year, and we were keen to capture the action on film. My tent was surrounded by an electric fence, which acts as an effective bear deterrent. Have you ever tried licking 6,000 volts? A quick zap from the fence will hopefully keep any unwanted visitors out of my sleeping quarters!

The area is riddled with bear trails — pathways that are used so often by bears that they are often six to eight inches deep in the ground. They make for easier hiking, and of course, usually lead us right to a bear or two!

Our anticipation was high — we’ve got several weeks’ worth of supplies. We set up base camp, prepared our camera equipment, and found the perfect sedge meadow (the bears focus a lot of their time on emerging sedges as they are surprisingly packed full of protein).

Now it’s just a case of waiting for the bears to show up!

There is plenty of evidence of bears all around — in fact it’s a tracker’s dream for me. Tracks, scat (droppings), rub trees, and claw markings can all be found nearby. This is one of the densest bear populations in the world — the very reason we are here to film.

As our journey continues northwards to the harsher climates and bear habitats of Alaska, I know we will look back at the coast and remember it as a paradise for bears.

Bingo! The bears are here! They first arrived about 1.5 miles from camp to feed in the sedge meadows, and before we knew it they were even paying a visit to our base camp on a regular basis.

Watch this space for more entries soon. The bear action has been intense — there is a new, unexpected adventure every day and I’ll look forward to sharing our experiences with you some more very soon.

Meanwhile, I’m heading back into the wild.