The Bear Blog with Chris Morgan follows the journey of Chris and his crew during the production of NATURE’s Bears of the Last Frontier, coming in 2011. To learn more about this project, check out the Bear Blog introduction video.

Chris Morgan is all smiles on the day of the shoot, but it didn't start out that way...

The aerial shoot is coming up soon. This is going to be one of the most exciting parts of the entire show. If we have the right weather, we’ll be able to show off the most stunning coast in all of Alaska — possibly the world, in my opinion. On this shoot we hope to establish the beautiful yet rugged Alaskan wilderness. It has to be everything people expect of Alaska and a whole lot more. This aerial shoot was booked over four months ago. The only problem with that is no one knows what the weather is going to be like that far in advance, and helicopters are expensive things to have laying about.

We also plan to film an air-to-air sequence with an iconic Beaver floatplane based in Kodiak. It will be flown by Josh Schein, a young but experienced bush pilot of Southern stock. He will fly across the Shelikov Straits to the Alaska mainland where he will pick up Chris to take him to a nearby bay. The film helicopter will come from Homer the same day and chase the Beaver floatplane through gorgeous glacial valleys separated by jagged mountain ridges. The company from which we’re renting the Heligimbal (a kind of motion-stabilized helicopter mount) will be flying from the east coast the day before. No breakfasts may be skipped, no irons left on, and a lot of alarm clocks will have to be working perfectly!

The most important factor of course will be the weather. Two days before the shoot, the weather service is predicting rain for all of southwestern Alaska. Weather services are notoriously paranoid though. Folks on the ground are giving slightly better than 50/50 odds. Our boat captain, John Rogers, is a man who errs on the side of caution. He is a seasoned veteran of the Alaskan waters and I take his word as gold. I tell him what I’m seeing on the radar: RAIN// ISOLATED SHOWERS. WIND// 20 KNOTS OR GREATER. “Yeah, It’s supposed to get a tad breezy,” he tells me in an understatement reminiscent of an Australian, “but I think we’ll pull it off.” Meanwhile, the weather satellite’s billion-dollar eye keeps showing that massive “L” bearing down on the coast like a deranged grizzly.

Day Before the Shoot

Everybody is in position, and the meter is running. Four barrels of fuel have been dispatched to the boat for the helicopter. A reschedule at this stage would cost almost a third as much as the actual shoot. I called both aerial teams tonight and told them there is no change in plan. “What’s the weather like up there?” I ask Homer’s new east coast arrivals. “There’s supposed to be a front moving in…” A few hours later Flight Service issues an AIRMET for the entire Alaska Peninsula effective until 3pm the next day. I hear Joe’s voice in my head: “If the weather looks shady, call it off and call me.” I scan the help wanted ads in my local paper. A local grocer is hiring. If the shoot goes poorly, I may be looking for work.

It must have been a photographer who came up with the phrase, “When life gives you a lemon, you make lemonade.” The weather is looking unstable in the official world, but local knowledge is still saying different. At this point, even if bad weather is the case, we must still go forward because too many wheels are in motion. Instead of clear heavens and snow-capped mountains, Joe might have gray skies and foggy lowlands to contend with. It will be up to him how best to portray the Alaska he is given. Joe can make changes to the settings on the Heligimbal camera and — with some help in post-production — transform an overcast day into a monochrome masterpiece. However, it would be less spectacular than the blue glaciers perched above lush green forests that we would see on a sunny day. If it’s overcast, there may not be many spectacular wide shots either. Then there’s the greatest of all aerial nemeses to contend with: rain on the lens. Like Bigfoot, rain on the lens is an elusive creature. It is usually only seen in post-production, many miles away and months after the shoot. 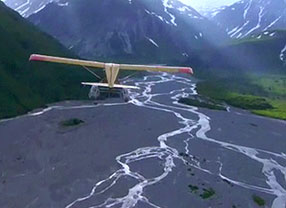 A shot from the final aerial sequence

Just got off a conference call with the aerial team. Our helicopter pilot says it’s a great day to “churn up the sky.” Above Homer, he says, the skies are blue with cute little popcorn clouds dancing around the bay. In Kodiak, where the Beaver floatplane is based, it’s low ceiling and drizzle. The crew on the boat says there is a low ceiling too, but maybe it’s fog. If fog, it should burn off by late morning. If it’s an overcast ceiling, the Beaver will have to turn back rather than risk a decent in the clouds. The plane is rented per hour — whether it’s in the air or resting on its floats. We’ve had an intense couple of days, and we’ve planned all we can plan. Now we need to let it happen. The weather service is sticking to its all-day rain predictions.

After the shoot, I get a call from Joe and Chris. The weather has been mostly clear! There was unstable air that first day as the low-pressure system passed through; both aircraft and passengers got knocked around pretty good. Amazingly, the camera was able to zoom in so tight on Chris’s plane they could see the make of his sunglasses. In selecting scenic shots, Joe got to the point that he was being picky! That is a sign of a good day on any film shoot — especially an aerial. At the end of the second day, Joe confidently wrapped the shoot feeling he had what he needed in the can and then some. I’m looking forward to seeing the master tapes, which will be shipped to me once backups have been made. The deliveryman won’t know it, but that will be one expensive box he’s carrying. Joe finally exhausts the caffeine in his system and hangs up the phone. I happily throw away the help wanted section. Thanks, Captain John!

Dean Cannon has been traveling and working around the world since leaving his home in Arizona at age 19. Originally from England, Dean has worked from Akureyri, Iceland to Perth, Australia doing numerous jobs as a traveler. In 2002, Dean found his way into filmmaking while living in Japan. Two months after arriving there he found work as a soundman on a documentary shoot in Africa. After working on many film and television projects, Dean joins the crew of Bears of the Last Frontier as assistant producer and 2nd camera.