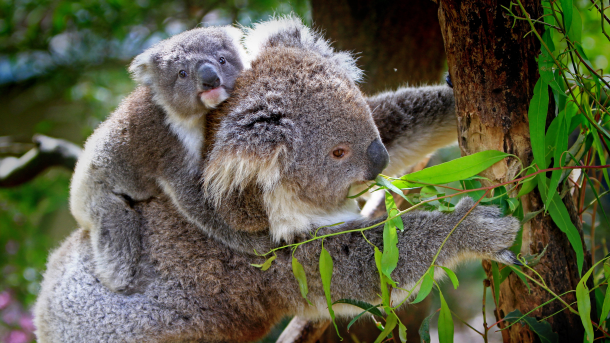 Koala: the koala is an arboreal herbivorous marsupial native to Australia.

There are two subspecies of koalas: adustus, the northern or Queensland koala, and victor, the southern koala. 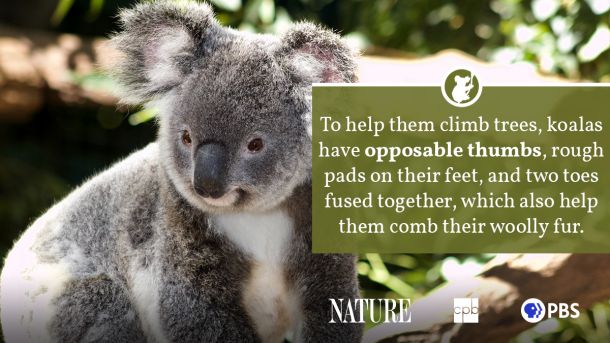 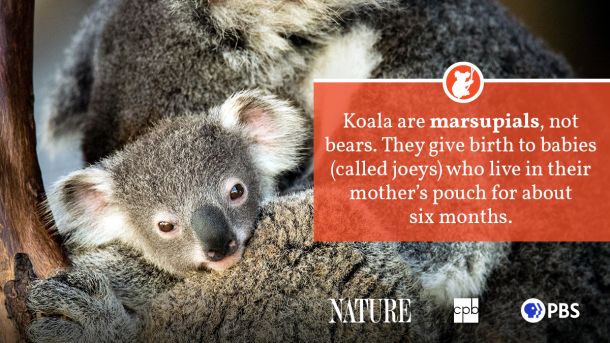 Koalas are known for their teddy bear-like appearance. They are often referred to as “koala bears,” but koalas are actually marsupials, not bears. Marsupials are an infraclass of mammals most commonly known for their pouches, which includes wombats and kangaroos.

Koalas are arboreal, or tree-dwelling, marsupials and have a number of adaptations for tree living. Their bodies are lean with long, muscular front and hind limbs and large, sharp claws to help with gripping tree trunks, and rough skin on the bottom of their feet to provide friction good for climbing. The koala has five digits on their front paws, two of which are opposable, which would be like a human having two thumbs. This allows the koala to grip branches as it moves from tree to tree. The koala has thicker fur on its rump, which provides a cushion when sitting on branches. 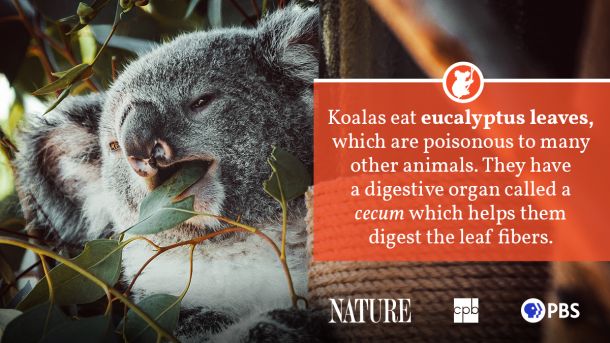 Koalas are folivores or leaf eaters. They primarily eat eucalyptus leaves, but will occasionally branch out to non-eucalypt plant species. They eat approximately a pound of leaves daily and rarely drink water, as they obtain water from their leafy diet.

Eucalyptus leaves are highly toxic to most mammals, but koalas’ digestive systems are specially adapted to detoxify the poisonous chemicals in the leaves. Eucalyptus leaves are high in fiber and low in nutrition, so they take a while to digest. To conserve energy, koalas spend anywhere from 18 to 20 hours of their day sleeping. Koalas are nocturnal and do the vast majority of their eating at night. 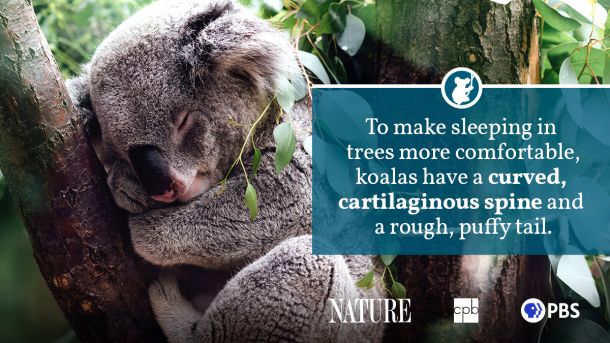 The species lives in tall eucalypt forests and low eucalypt woodlands. They also live in coastal and island woodlands.

Koalas are native to Australia and are found in the eastern and southern regions of the country. The majority can be found in the four Australian states: South Australia, Victoria, Queensland, and New South Wales.

The koala gestation period is only 34 to 36 days. The joey is born blind, furless, earless and only about an inch long. Immediately after being born, it crawls up from the birth canal into the mother’s pouch. There, the joey attaches to one of two teats. It will not emerge from the pouch for approximately six months. After six to seven months of solely feeding on milk, the joey starts consuming its mother’s protein-rich pap, which inoculates the baby’s gut with the necessary microbes for eucalypt digestion.

At about a year old, the young koala no longer drinks milk or fits in its mother’s pouch. Female koalas do not always reproduce annually, in which case, the yearling joey may stay with its mother longer. Once independent, the joey remains near its mother’s territory before claiming its own. Koalas become sexually mature at around two or three years, but non-alpha males are far less likely to breed successfully. 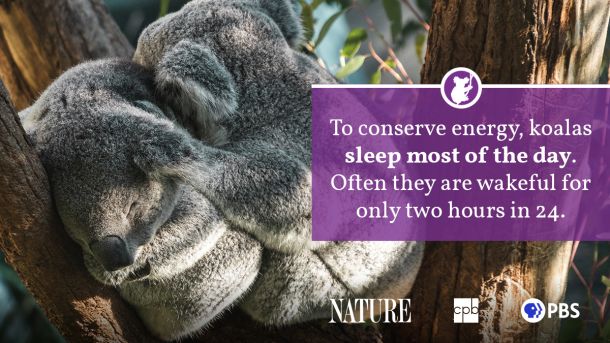 Koalas are generally solitary animals and live in well-defined home ranges. Each home range is often controlled by a single alpha male, with a number of females also living inside that area, These females will mate almost exclusively with the dominant male, who will defend his territory against outside males that may move into the area. Females generally want to reproduce with the largest male and rely on male vocalizations to assess the potential mate’s size.

Although home ranges may overlap, koalas are mostly solitary animals that avoid confrontations and interactions whenever possible. When males aren’t bellowing to attract mates, communication through sounds and scents is often meant to alert wandering koalas of their presence and prevent encounters. Males are generally more vocal than females, but females will communicate vocally with their young, and both sexes make a variety of noises when in distress.

Koalas generally live an average of 13 to 17 years. Females often live longer than males, whose life expectancy is often less than 10 years due to injuries during fights, attacks by dogs and being hit by cars. 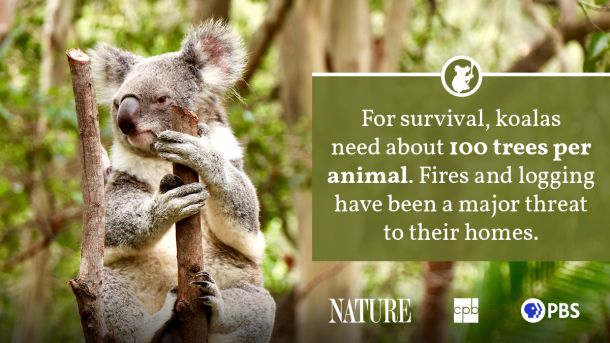 Habitat loss and climate change are among the largest threats to koalas. Human activity, such as agricultural and urban development, have led to the destruction and fragmentation of koala habitat. They are spending more time on the ground moving from tree to tree. While on the ground, koalas are much more vulnerable to being hit by cars and attacked by predators like dogs. They also have elevated levels of stress, which makes them more prone to diseases like chlamydia.

Increasing evidence links the changing climate to lower to significant koala range contractions in western Queensland and New South Wales. Climate change is linked to reduced nutrient levels in Eucalyptus leaves, rendering them of lower quality. Droughts and extremely high temperatures will likely increase in incidence and severity, which will likely have an impact on koala populations.

From late 2019 to early 2020, deadly wildfires raged throughout parts of Australia, largely as a result of high temperatures and severe drought. Billions of animals are estimated to have died in the fires, including other unique Australian species like wombats and kangaroos. These massive bushfires burned more than 26.4 million acres, including koala habitat. Thousands of koalas as officials estimate up to 30% of their habitat was destroyed by the fires. 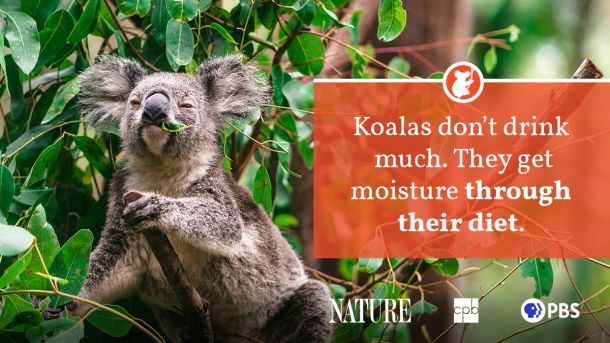 The koala was previously classified as Least Concern on the IUCN’s Red List, but it was uplisted to Vulnerable in 2016.

Conservation groups, including the World Wildlife Fund, are working to protect koalas. WWF Australia is helping koalas in care. As more koalas are becoming sick and injured, koala hospitals are treated the injured until they are ready to return to the wild. WWF is also working to protect and restore koala habitat.

Adopt a Koala: Make a symbolic koala adoption with WWF and help with their efforts.