Leopard (Pathera pardus): one of the five big cat species of the genus Panthera.

The animal’s name derives from the Greek word leopardus, a combination of leon (lion) and pardus (panther). There are nine subspecies of leopards, which can be distinguished by the characteristics of their coat. Despite their names, the clouded leopard (neofelis nebulosa) and snow leopard (panthera uncial) are often considered separate species. 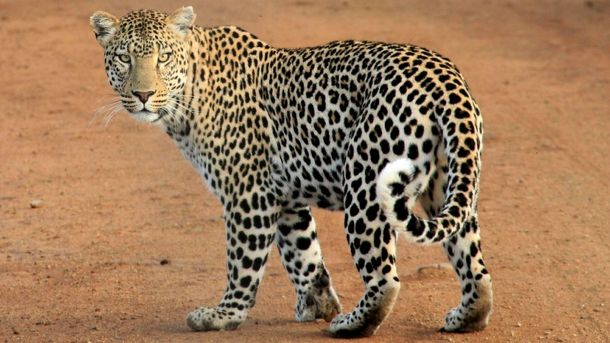 Leopards are the smallest of the large cats, which includes lions, tigers, and jaguars. Female leopards weigh 46 to 132 pounds and males weigh 80 to 165 pounds. They average 28 inches at the shoulder with a general range of 17.5 to 30.5 inches high at the shoulder.

Depending on the subspecies, a leopard’s coat can range from tawny or light yellow in warm, dry habitats to a darker, reddish-orange in dense forests. In the thick, dark rainforest of Southeast Asia, leopards with nearly black coats can sometimes be found. While these leopards may appear solid black at first glance, their spotted pattern is visible in certain lights. These melanistic (black) leopards exist at far fewer numbers than the lighter coats.

Leopards are carnivores. Their diets include giant eland, kudu, springbok, bushbuck, impalas, Thomson’s gazelles, duiker, primates, warthogs, guinea fowl, hares, rodents, fish, and dung beetles. They are nocturnal animals and do most of their hunting at night. Their large eyes and dilated pupils allow them to see well in dark conditions.

Leopards are incredibly athletic and known for their climbing ability. They often carry food into trees to avoid losing it to scavengers like lions and hyenas. They are also fast and can run up to 36 mph. In comparison, the cheetah, the fastest land mammal, runs 50 to 80 mph. Leopards can leap 20 feet forward in a single bound and jump ten feet straight up. They will leap and jump to capture prey, especially birds. Unlike most cats, leopards are strong swimmers. They are one of the few cats that like water. They are capable of killing prey larger than themselves.

Leopards can go for long periods of time without water, living off the moisture of their prey.

Leopard habitats include forests, subtropical and tropical regions, savannas, grasslands, deserts, and rocky and mountainous regions. They can live in both warm and cold climates. Of all the big cat species, leopards are the only known species that live in both desert and rainforest habitats.

The range of the leopard is the most widespread of all the big cats. Their range covers a large stretch of Africa, parts of the Middle East, and Asia, including China, India, and eastern Russia.

During the breeding season, adult males and females will use scents to find each other. The male may follow a female around for several days before she is ready to breed. If she is not ready to mate when the male attempts, the female may attack her pursuer.

The gestation period is approximately 3 months, and the female gives birth to a litter of 2 to 3 cubs on average. She will use a cave, a burrow, or an opening in thick vegetation as a birthing den. The cubs are born vulnerable with sealed eyes and little hair. The mother will stay with her cubs for their first few days before venturing out to hunt. She will continue to move her cubs from one den to the next while she hunts until they are large enough to venture out with her.

At about three months of age, the cubs venture out with their mother to learn hunting and survival skills. By 12 to 18 months, the young leopards are typically ready to head out on their own. They reach sexual maturity around two to three years.

Leopards tend to be solitary animals and rarely interact with each other, except to mate or raise cubs. Leopards are territorial and male leopards will fight if their territories overlap. They mark their territory with urine and claw marks on the bark of trees.

The largest threat to leopards is human activity. Urban expansion results in habitat loss and a decrease in food sources. Leopards are also hunted by poachers for their valuable fur and whiskers. Because leopards prey on livestock, ranchers will frequently poison the large cats in an attempt to protect their animals.

Despite their size and strength, leopards are not always at the top of the food chain. In Africa, lions and packs of hyenas or painted dogs can kill leopards. In Asia, a tiger can do the same. Leopard cubs are particularly vulnerable to these predators, as well as other adult leopards. To avoid these predators, leopards hunt at different times and often pursue different prey than their competitors. They also rest in trees to keep from being noticed.

All leopard subspecies are either endangered or threatened. Many leopard populations are endangered, especially those outside of Africa. One of the rarest subspecies of leopard is eastern Russia’s Amur Leopard. There are only an estimated 30 currently living in the wild.

Numerous conservation groups, local wildlife parks, and conservation laws, such as the U.S. Endangered Species Act and the Commission on International Trade, are working to protect leopards. To protect these endangered leopard species, scientists and researchers are working to monitor and survey these big cats. In 2002, trail cameras were added to allow conservation scientists to identify individual leopards by their unique spot patterns and monitor them over many years. Used year-round, the images uncover the secret lives of these cats walking, stalking, and rolling playfully on the ground.