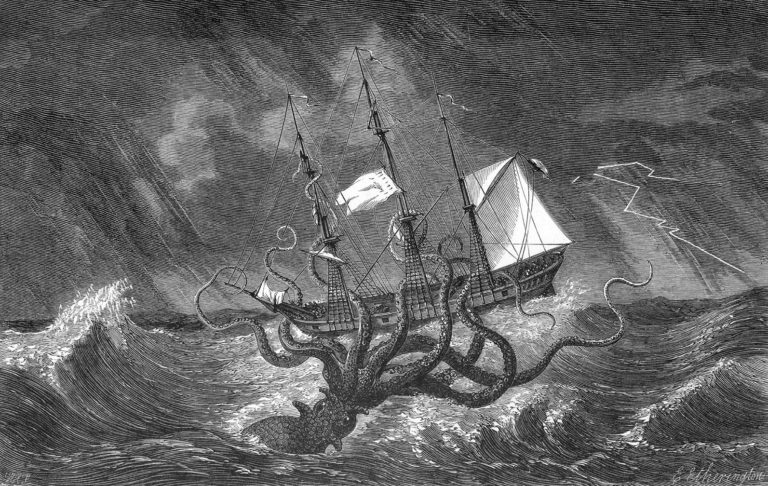 Many people would agree that the octopus is one of the most fascinating and strange creatures on the planet. After all, it’s a creature with more than half a billion years of evolution on an entirely different path than that of our own, yet is extremely intelligent and resourceful. And that intelligence is distributed in a way that is totally alien from mammals – with neurons distributed throughout their suckers, arms, and brain rather than centralized like our own brain. They have three hearts, blue blood, a venomous beak, no bones, and therefore can squeeze themselves into all kinds of shapes and spaces. They can change the color as well as the texture of their skin into a myriad of dazzling colors and patterns. Truly they are unlike any other creature.

So perhaps this is why the octopus has long been the subject of mythical tales and urban legends. They seem other-worldly. They appear to have magical abilities, and of course, they live in the ocean – adding a sense of mystery that naturally leads to fantastical stories. Here are just a few of the popular depictions from literature, film, and culture that focus on these remarkable cephalopods.

Perhaps the most famous mythical representation of the octopus is the Kraken. It’s a legendary, giant cephalopod-like sea monster originating from Scandinavian folklore. According to the Norse sagas, the Kraken dwells off the coasts of Norway and Greenland and terrorizes nearby sailors. Authors over the years have postulated that the legend may have originated from sightings of giant squids that may grow to 13–15 meters (40–50 feet) in length. The sheer size and fearsome appearance attributed to the Kraken has made it a common ocean-dwelling monster in various fictional works –  even seen as recently as 2006, in Disney’s Pirates of the Caribbean: Dead Man’s Chest.  Throughout the centuries the Kraken has been a staple part of sailors’ superstitions and mythos.

A quick search on the internet will turn up several stories about octopuses escaping from their tanks in aquariums around the world – some true, some maybe not so true. Perhaps the most popular is the story of Inky. He escaped from a New Zealand aquarium back in 2016, successfully making a dash for freedom by breaking out of his tank after the lid was left slightly ajar, slithering across the aquarium floor, and down a 50-meter drainpipe to the sea. There have also been several stories of octopuses climbing out of their tanks and into neighboring tanks in aquariums – often in search of food they’ve spotted through the glass. Tales of escape aren’t merely confined to aquariums. One viral internet video shows a very large octopus squeezing itself through a hole on a ship in order to return to the safety of the ocean. There is also a rather well-known tale of an octopus that escaped the deck of a trawler in the English Channel. He managed to slip out of the net left on deck, slither down into the cabin of the ship and was found hours later hiding in a teapot. The art of the octopus escape was also charmingly referenced in Pixar’s Finding Dory in 2016.

This characterization essentially goes back to the Kraken but is worth highlighting, because it clearly shows the bad rap of these previously misunderstood animals. From the sea monster in Jules Verne‘s 20,000 Leagues Under the Sea, to Ursula the Sea Witch in Disney’s retelling of The Little Mermaid, octopuses are often the shape of characters meant to invoke fear or terror. Dr. Otto Octavius, or Doctor Octopus, is another villain from the Marvel Spider-Man series, who fiendishly used four mechanical tentacles when fighting.  It doesn’t seem like much of a coincidence that many depictions of hostile alien beings from outer space in film and television have an octopus-like head or slimy tentacles. Even the aliens from The Simpsons were given octopus-like forms. Perhaps it’s their astonishing intelligence or their amazing abilities that lend thoughts of alien life-forms, and maybe this is coupled with the fact that they are also predators who can have a venomous bite that illicit fear in popular culture depictions, but whatever the reason, octopuses have a long history of playing the villain. Luckily, that seems to be changing with more research and awareness of these marvelous animals.

Octopuses have not always been associated with fear. In fact, in many cultures from South America to the Pacific Northwest, to the Polynesian Islands, octopuses were traditionally revered as divine protectors and spiritual guides. There are some traditional beliefs that the octopuses control the weather and have the power to heal the sick. Na Kika is the ancient octopus god of the Gilbert Islands and is said to have helped built the Pacific islands. In Hawaiian culture, the god Kanaloa would most commonly take the form of an octopus. And there are even some ancient myths that tell us our current universe is merely the remnant of a more ancient one – the only survivor of which is the octopus.

Mythical, mischievous, misunderstood and marvelous, it’s no surprise that octopuses have captivated humans’ imaginations and inspired such story-telling and popularity.

If you’re looking for more fun facts about octopuses, check out these interesting articles and fun resources from our friends at Science Friday and NOVA.