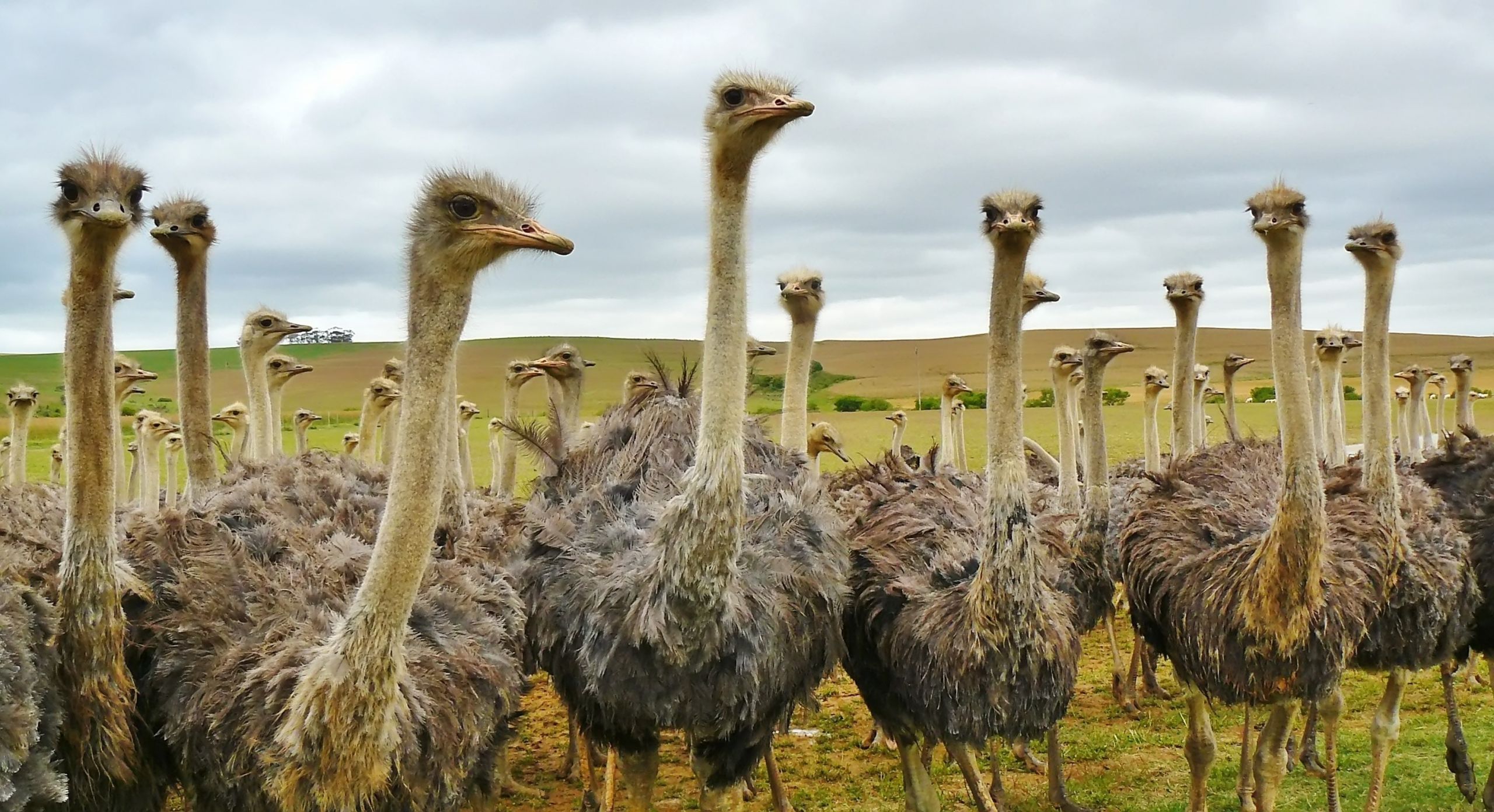 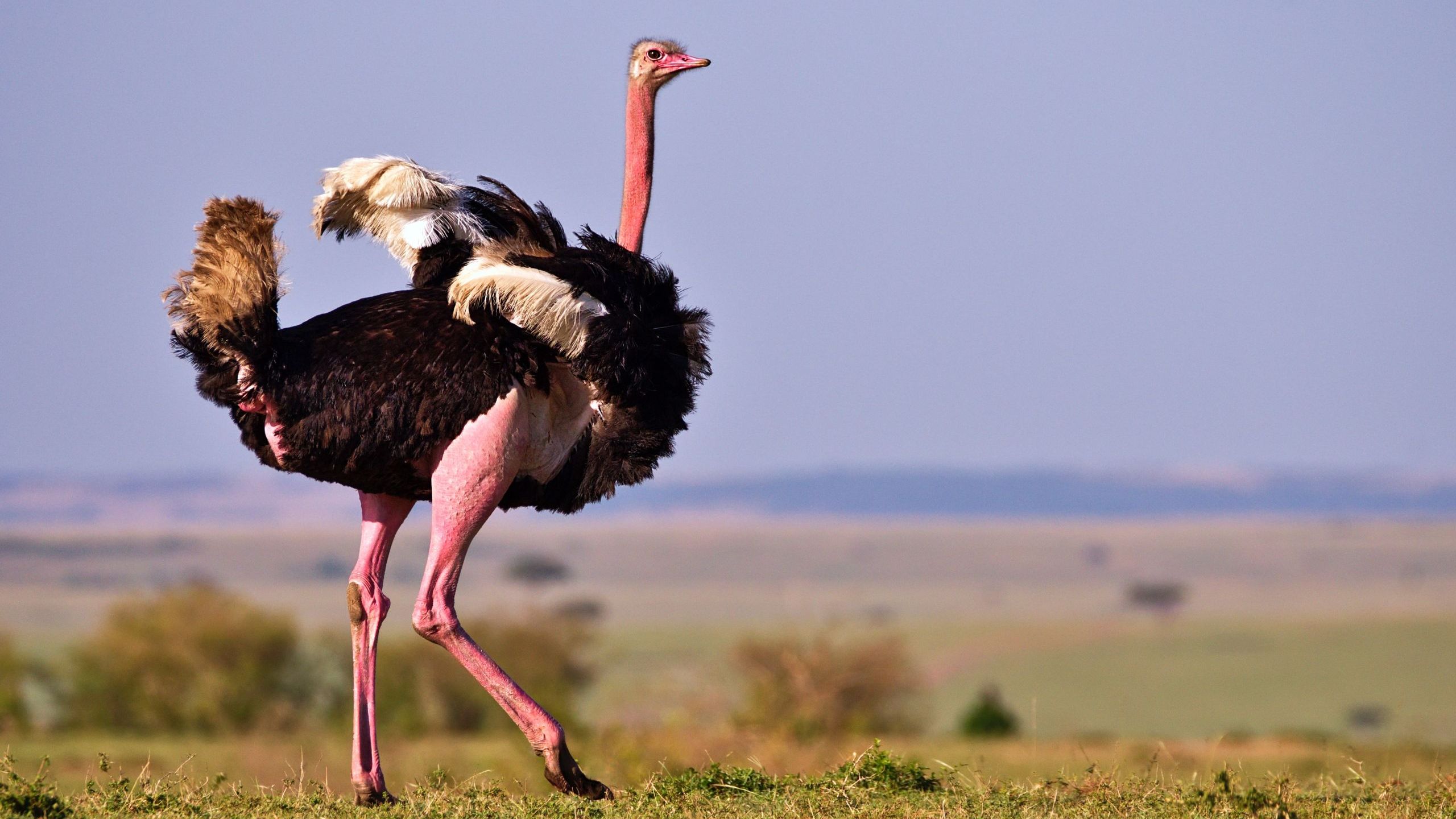 The ostrich is the largest and heaviest living bird. Males are typically larger than females, weighing 220 to 287 pounds and measuring 6.9 to 9 feet in height. Meanwhile, females weigh 198 to 242 pounds and range in height from 5.7 to 6.2 feet. 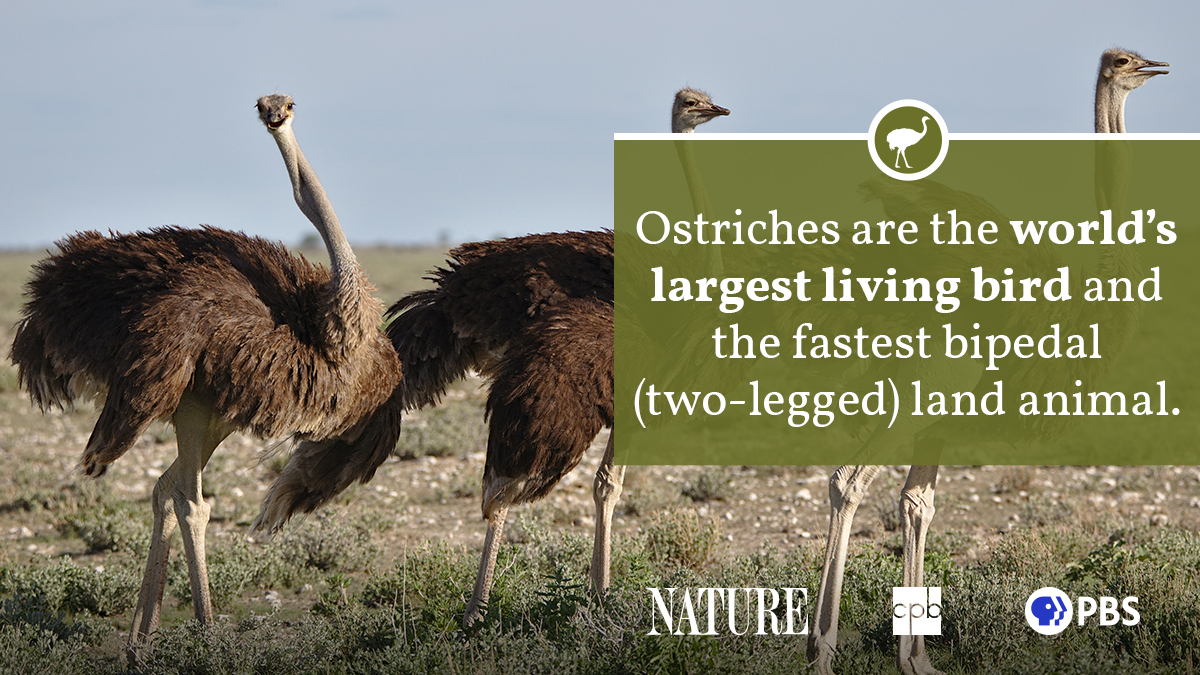 Ostriches are the largest and heaviest birds in the world. Given their weight, they are flightless and cannot fly into the sky. Instead, ostriches are great runners and are able to reach speeds of up to 43 miles per hour. One stride can be 10 to 16 feet long. They have long, strong legs with two clawed toes, allowing them to reach these high speeds.

An ostrich has a long neck, prominent eyes and sweeping eyelashes. Ostriches have the largest eye of any land animal. An ostrich’s eye is nearly 2 inches across. Their long neck and excellent vision help them see great distances, allowing them to keep an eye out for predators.

Ostriches have unique feathers that are loose, soft, and smooth, giving them a “shaggy” look. Adult male ostriches are black with white wings and tail feathers, while immature birds and adult females have brownish-gray feathers. 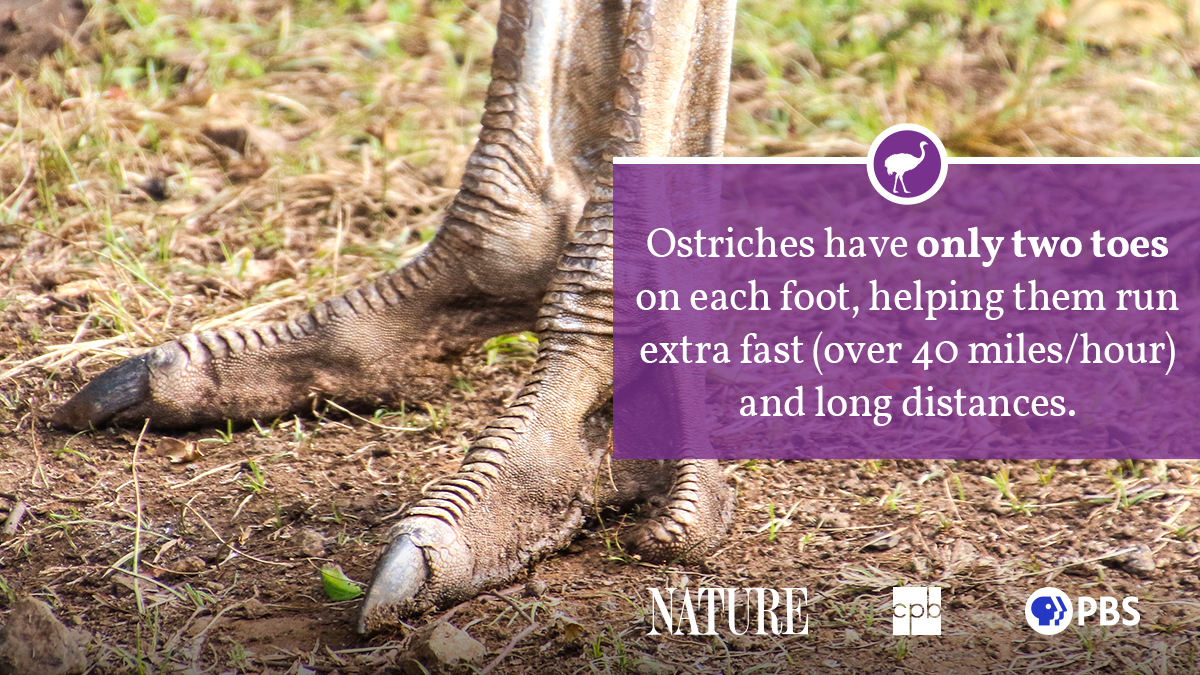 Ostriches are omnivores. Their diet varies depending on the food available in their habitat. They primarily eat plants, but also eat insects, snakes, lizards and rodents. They are able to consume things that other animals can’t digest because they have tough intestines to absorb as many nutrients as possible. Ostriches also swallow sand, pebbles, and small stones that help grind up food in the gizzard. Since they eat a lot of plants, ostriches do not need to drink water. However, they may drink water at a water hole. 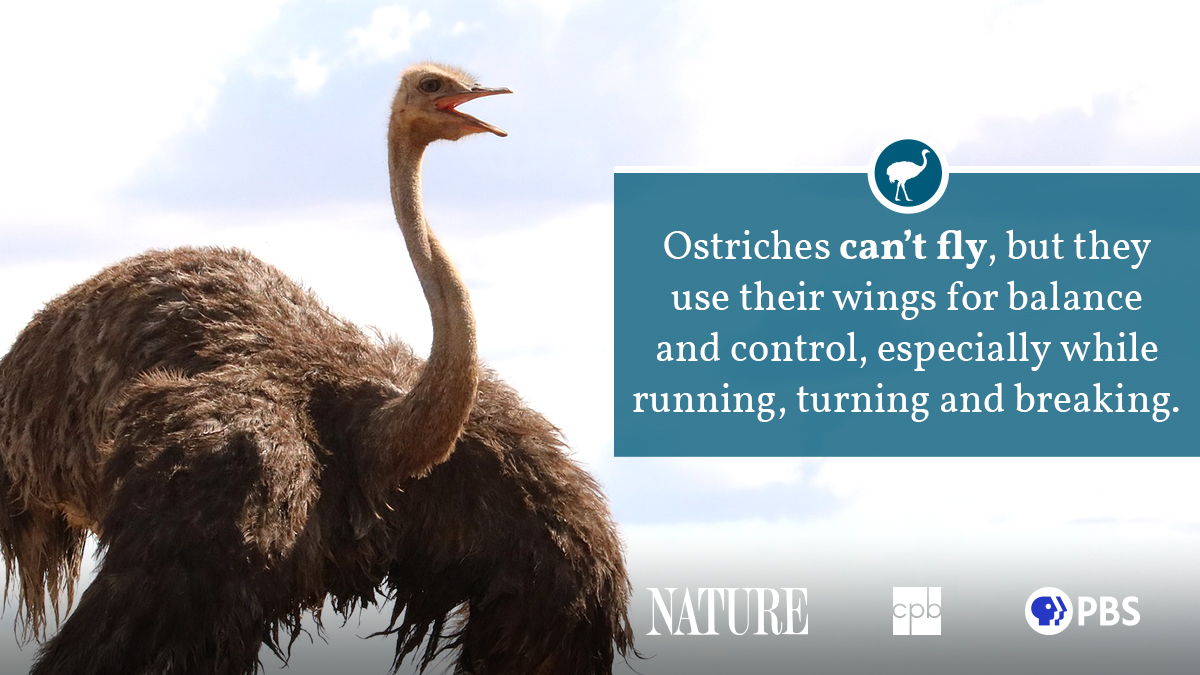 Ostriches are native to Africa. 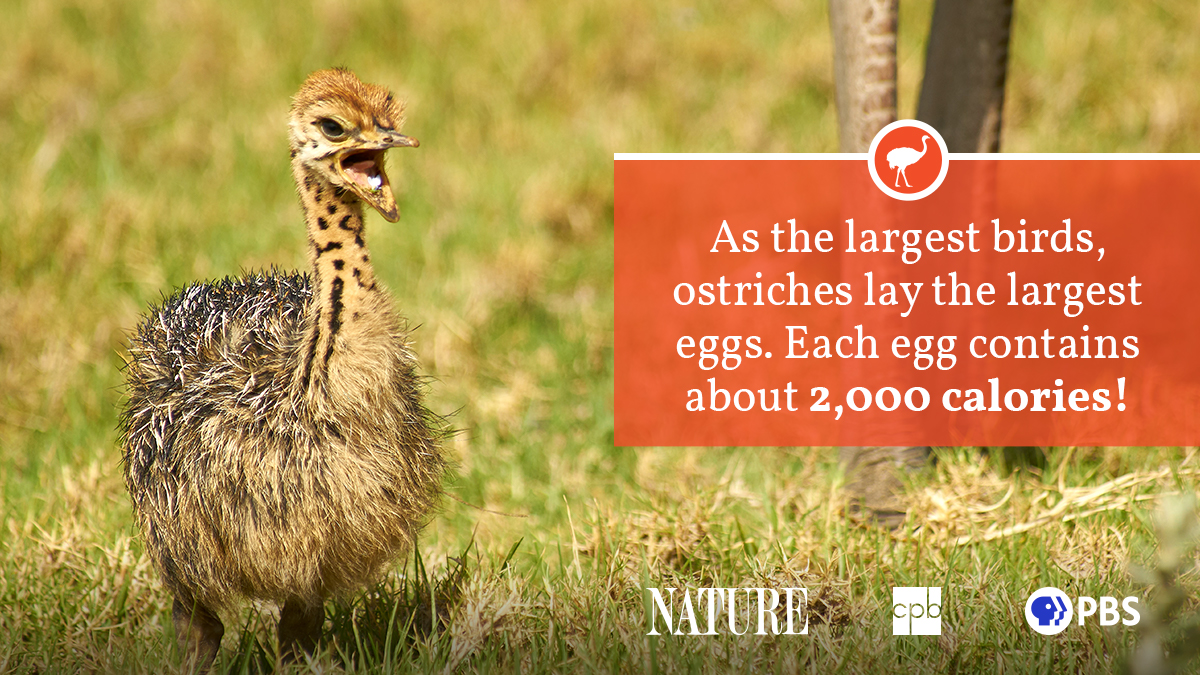 Ostrich courtship is ritualized and synchronized. A male used his black-and-white coloring to attract a female. He will sink to the ground like a bow and then wave and shake the feathers of first one wing and then the other while moving his tail up and down. After this movement, he gets up and moves toward the female, holding his wings out and stamping as he goes to impress her. If she approves, she mates with him.

The dominant hen mates with the territorial male, and they share the tasks of incubating the eggs and caring for the chicks. The territorial male is polygamous and may mate with other females. The other females may also mate with wandering males. The other females then lay their eggs in the same nest as the dominant hen’s eggs. The nest is a shallow depression scratched in the dirt by the male. The dominant hen makes sure her eggs are closest to the center, and therefore most likely to hatch successfully. A communal nest allows more eggs to successfully hatch overall for the flock. A female ostrich lays 7 to 10 eggs at a time. Ostrich eggs are the largest eggs, weighing about 3 pounds, measuring 6 inches in length and measuring 5 inches across. Only dinosaurs produced larger eggs.

The incubation period is about 42 to 46 days. When they hatch, the chicks are about the size of barnyard chickens, but they grow at a rate of 1 foot per month. Chicks will start to leave the nest with their parents a few days after hatching. By four months, they start to show their adult plumage and by six months, they are about the size of their parents. Ostriches reach sexual maturity around three or four years old, which is when males grow their black-and-white feathers. 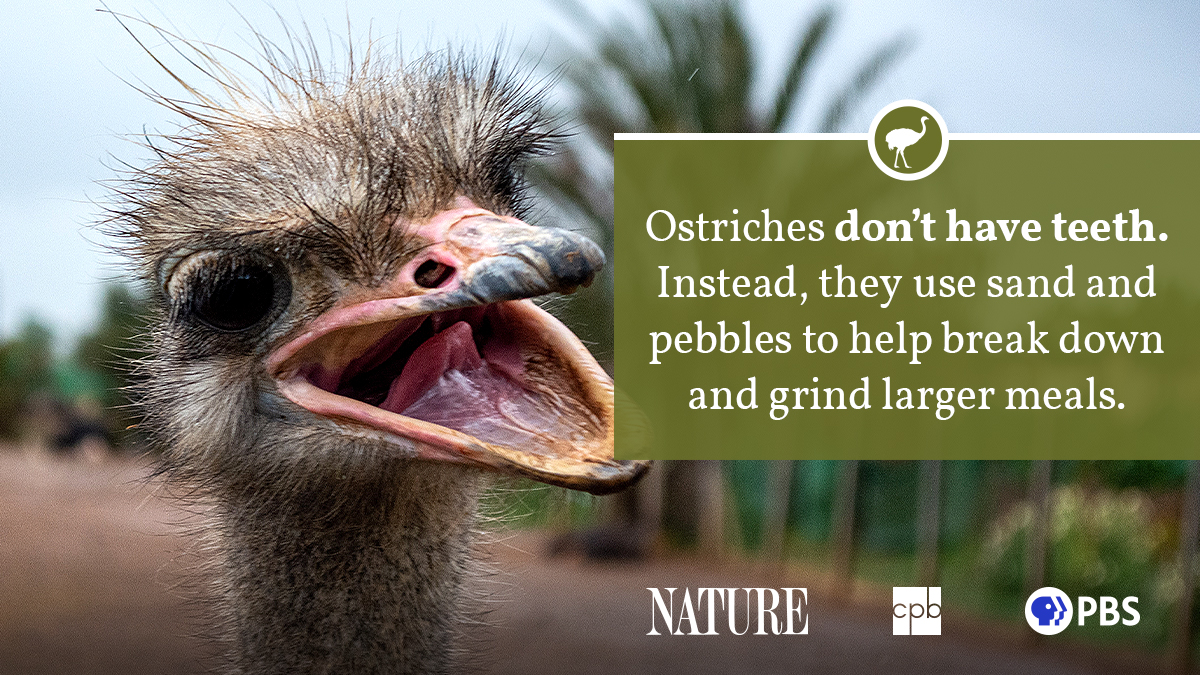 Ostriches live in groups, which helps with defense. They are typically found in flocks of about 10 birds or just a male and female pair but sometimes gather in large flocks of 100 or more. These groups have a pecking order with a dominant male, a dominant female called the “main hen” and several other females. The dominant male establishes and defends their territory. Lone males may also come and go during the breeding season. 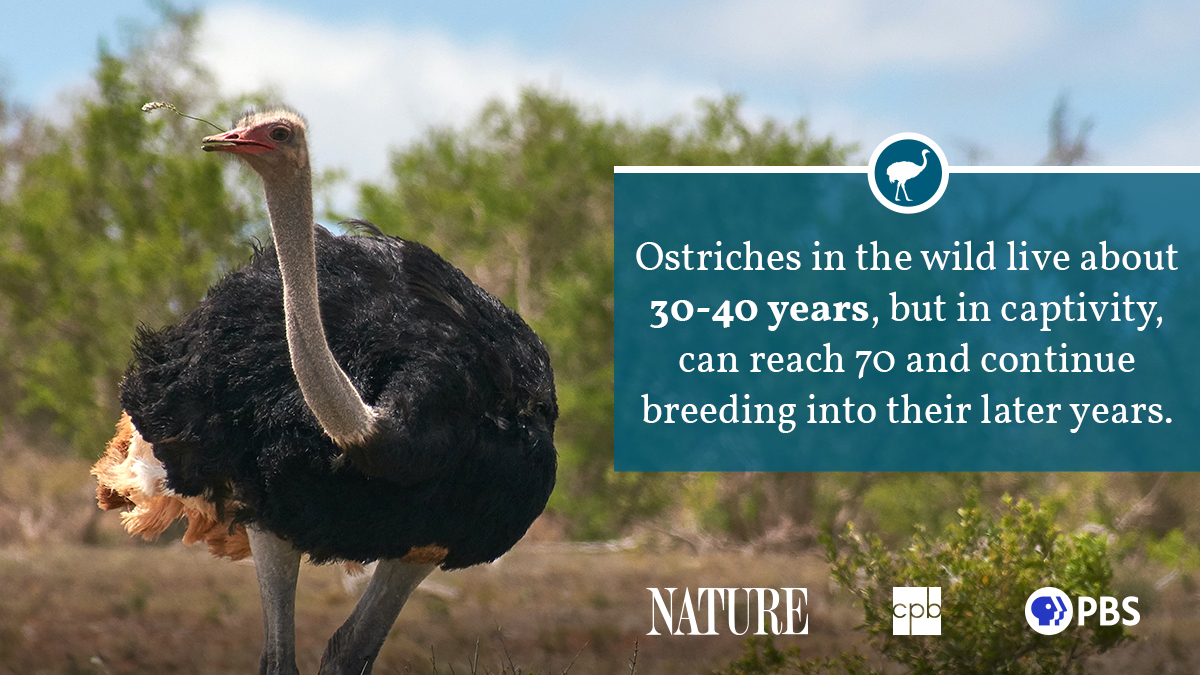 In the wild, ostriches live 30 to 40 years. But in captivity, ostriches have been known to live until their 70.

Ostriches have several natural predators, including cheetahs, lions, leopards, hunting dogs and spotted hyenas. Other predators, like Egyptian vultures and jackals, may take ostrich eggs. When an ostrich senses danger and cannot run away from the threat, it will flop to the ground and remain still with its head and neck flat on the ground, so it blends in with the ground. When an adult ostrich is threatened, it attacks with a ​clawed foot that delivers a kick powerful enough to kill a lion.

Humans pose other major threats to ostrich populations and their habitats. As human populations grow and expand, ostriches are losing their habitat. Ostrich feathers have long been popular in fashion. In the 18th century, ostrich feathers were so popular in fashion, particularly in the hat industry, ostrich populations declined. Ostrich farming helped the population recover and still continues on a smaller scale. Ostriches are farmed and hunted for feathers, skin, meat, eggs, and fat. 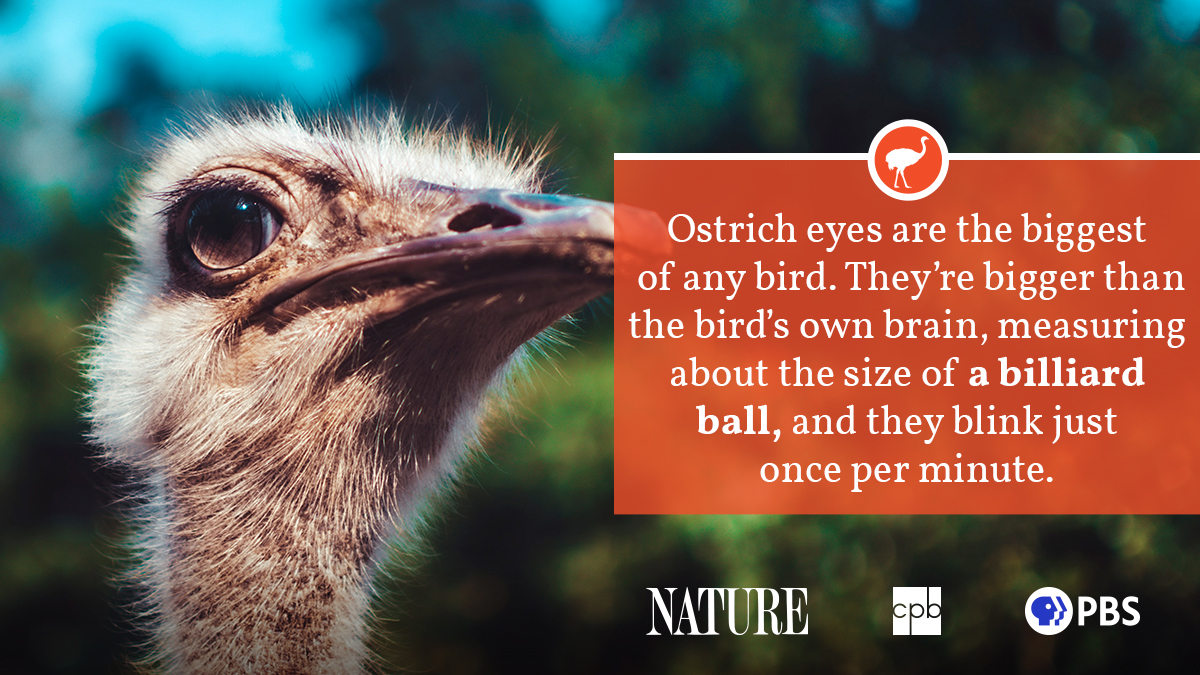 Strict protection and farming are needed to conserve the remaining ostrich populations. Conservation groups and government agencies work to protect these populations. For example, the San Diego Zoo Safari Park works with the red-necked ostrich in Niger and provides technical expertise and funding to develop and manage a breeding program for the birds. This helps to establish secure and self-sustaining populations in that country. The African Wildlife Foundation helps to conserve ostrich populations by working with local communities to decide on an appropriate plan to bring tourism to the area.

Sources: the San Diego Zoo and the African Wildlife Foundation.