Giant Panda (Ailuropoda melanoleuca): A bear native to south-central China. It is considered a national treasure to China and is protected by law in its bamboo forest home.

AKA: panda bear or panda 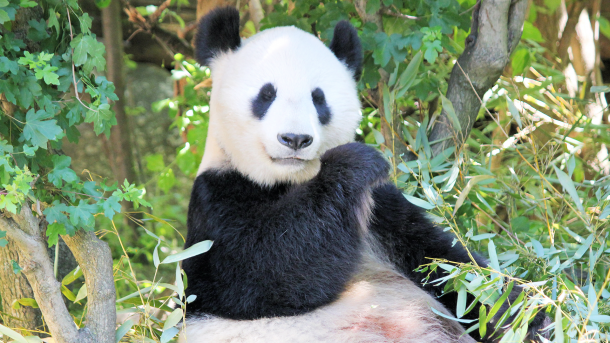 Scientists long debated whether pandas are a type of bear, raccoon, or something all their own. Through studying their DNA, scientists have confirmed that pandas are related to bears. Giant pandas are similar to other bears in their general looks, the way they walk and climb, their skull characteristics, their social system and their reproductive biology, according to the San Diego Zoo. 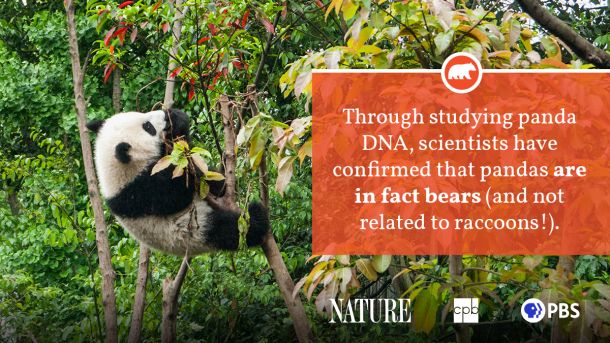 Pandas are well-known for their round bodies and the large, black patches around their eyes. They are known for their black and white coloring. Each panda’s markings are unique and differ slightly from any other panda. Scientists are not sure the reasoning behind their coloring but suspect it has to do with camouflage or for finding a mate. Not all pandas are black and white, there is also a rare brown and white variation of the giant panda. 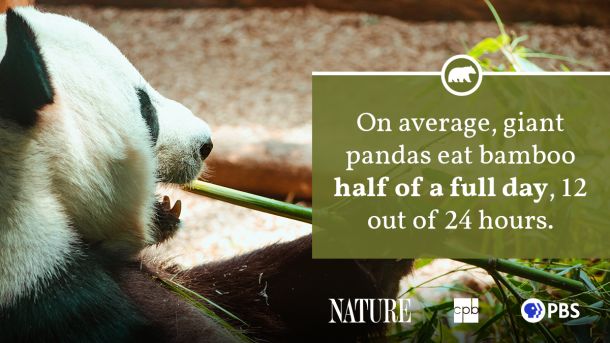 A panda’s diet is almost entirely bamboo. They eat the leaves, stems and shoots of various bamboo species. Because bamboo contains very little nutritional value, they must eat around 26 to 84 pounds of it every day, depending on what part of the bamboo they are eating. They spend at least 12 hours each day eating bamboo.

Pandas branch out from time to time, with about 1% of their diet comprising of other plants – and even meat. If they branch out, they are known to eat grasses, bulbs, fruits, some insects, and even rodents and carrion. 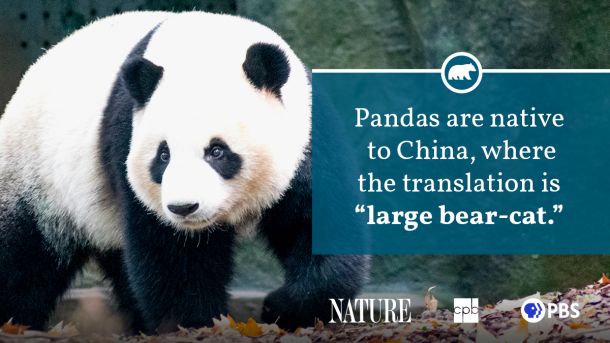 Pandas live mainly in temperate forests high in the mountains of southwest China. 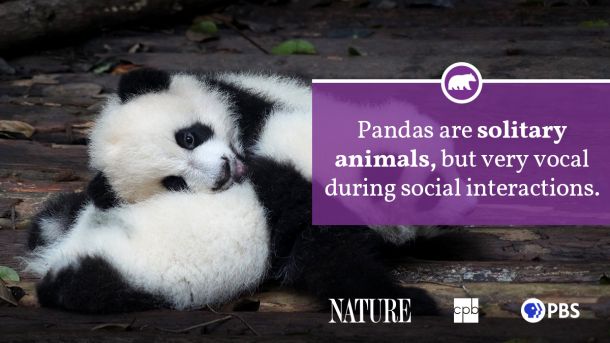 Pandas spend most of the day eating and sleeping like other bears. Wild pandas are solitary creatures and are protective of their space. Their territorial behavior is due to their reliance on large amounts of bamboo for their survival. If two pandas happen to cross paths, they’ll typically growl, swat, lunge at each other and possibly bite each other. The only exception for this behavior is the very brief mating season and the mothers with cubs.

Pandas have a slow reproductive rate. Mature females usually breed just once every two or three years, and a typical female panda may bear about five litters in her lifetime. The average pregnancy of female pandas is about 135 days, but the true gestation of the fetus only takes about 50 days. The female will give birth to one or two cubs, which weigh only three to five ounces at birth. The mother will nurse the cubs until they’re 18 months old. At which time, she will send them out into the wild so she can prepare for the next litter. Females reach sexual maturity between four and five years old, where males reach it around six to seven years old. 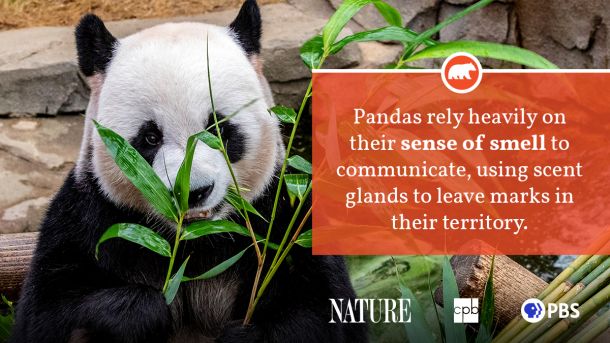 Habitat loss and hunting are the largest threats to pandas. Infrastructure development is increasingly fragmenting and isolating panda populations, preventing pandas from finding new bamboo forests and potential mates. While the Chinese government has established more than 50 panda reserves, only 67% of wild pandas live in these reserves, according to the World Wildlife Fund (WWF).

Hunting is another threat to pandas. While poaching has declined in recent years, largely due to the enactment of the Wildlife Protection Act in 1988, pandas may accidentally get caught in snares.

Low reproduction rates and bamboo shortages are among other threats to panda populations.

Pandas have few natural predators, fewer now than they did historically. Tigers are generally not found in what remains of panda habitat, and leopards are found in reduced numbers. 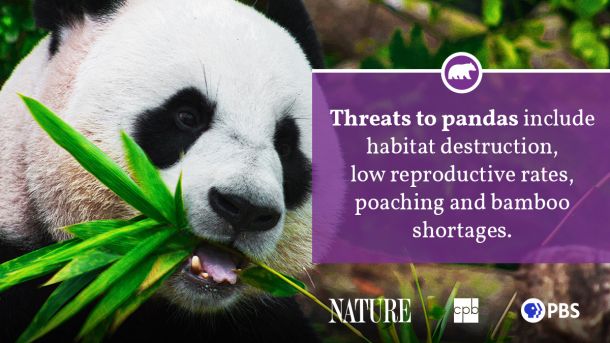 Pandas are classified as vulnerable. There are approximately 1,864 in the wild, according to WWF.

In China, panda protection efforts began in 1957. In 1989, the Chinese Ministry of Forestry and WWF formulated a management plan for the giant panda and its habitat. It called for reducing human activities in panda habitat, managing bamboo habitat, extending the panda reserve system and maintaining captive populations of pandas.

WWF continues to work with the Chinese government’s National Conservation Program to conserve the giant panda. As a result of the program, panda reserves now cover more than 3.8 million acres of forest. China has also set up 65 panda reserves that protect panda habitats from further development.

China continues to make strides to protect the panda and its habitat. The government has enacted policies, such as the “Grain-to-Green” program, that have helped the nation gain forestland. However, it is still unclear if this newly forested land is suitable for pandas.

The San Diego Zoo is another organization that works to conserve pandas. In the 1990s, scientists doubted whether they could save pandas from extinction. There was not much research on their behavior in the wild, and they did not reproduce well in zoos. San Diego Zoo Global partnered with Chinese colleagues to create a conservation strategy. They developed early-detection pregnancy tests and milk formula for panda cubs, which raised survival rates from zero to a hundred percent. By 2010, there were 300 pandas in zoos worldwide and breeding centers in China. Researchers believe this milestone number will ensure a self-sustaining population. 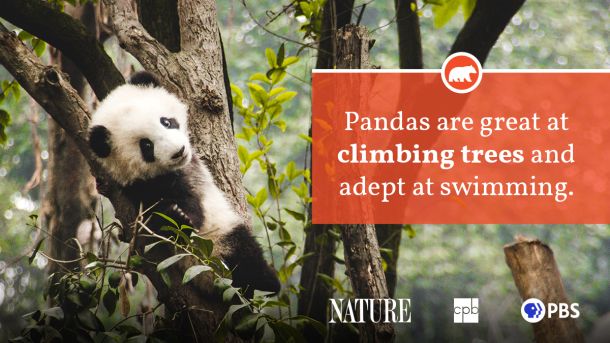 Support: Conservation groups like the San Diego Zoo Global Wildlife Conservancy can use your help in their efforts.