NATURE’s new film Pandas: Born to be Wild explores the daily lives of wild pandas, which up until this film remained largely a mystery. Filming over three years, two Chinese cinematographers trek through the steep forested trails of the Qinling Mountains to catch a glimpse of wild pandas. With the help of scientists and rangers on this journey, they capture startling new wild panda behavior on screen. Unlike the playful image of captive pandas, wild pandas are solitary and territorial. The film crew also follows the training of a young panda born in captivity learning to be a panda in the wild.

NATURE spoke with the filmmaker Jacky Poon about his experience filming both wild and captive pandas. Pandas: Born to be Wild premieres on Wednesday, Oct. 21, at 8/7c on PBS (check local listings). 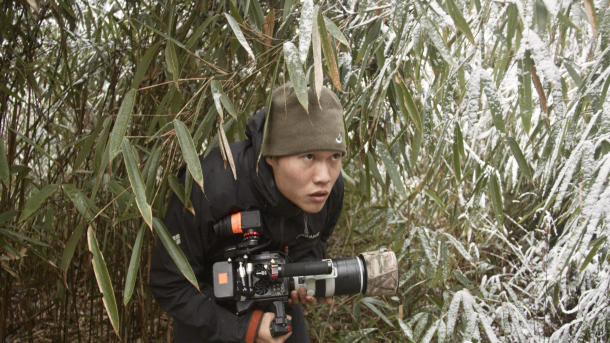 After filming both wild and captive pandas for years, what would you say are the most surprising things you learned about each of their behaviors?

The most surprising behavior that I’ve learned is how far wild pandas travel, especially in their mating season. I learned from books and from research that pandas stay in one area, in particular, to feed on bamboo and that they’re solitary. However, over the mating season, their territory greatly overlaps and they travel for tens of kilometers a day in search of the right mate. Seeing GPS data is one thing, but actually seeing different droppings in areas where bamboo doesn’t exist, for example, is another thing. We often think pandas, especially captive pandas, just sit around and they don’t really do much, just cute and cuddly, and that’s their main priority. But in truth, in the wild, the amount they travel is one thing that we weren’t really expecting.

Another surprising thing that we weren’t expecting until we saw a wild panda face-to-face is how aware they are. We could see it in its eyes – we were so close to the panda, probably 10 to 15 meters away, and you can see straight away how aware he is of the environment he’s in. He sniffed around, he looked around, and that’s something that you don’t see at all in captive pandas’ eyes.

Why is it necessary to keep pandas in captivity? What do you say to those who argue that it’s inhumane?

I think science is crucial, not only to understand the pandas but also to be able to prove with science what’s important for them to thrive in their natural habitat, their bamboo forest. And that’s what led to the protection of their habitats. Not only their habitat and the pandas are protected, but all the species within. There are millions and millions of species within the fauna and flora. I think that is what is the most iconic and important thing about protecting pandas. But without the science and understanding of pandas, we will never be able to persuade cooperation and with the governments to protect these vital areas for these animals. I think this is actually a very, very important part of the science to understand the animals and protect their habitat.

Do they miss out on anything growing up in the wild?

I don’t think they missed out on anything. Seeing the panda babies in the wild, which we didn’t expect to see, let’s be honest. Over three years, that wasn’t even on a wishlist. We just think that they’re so elusive that we’ll never see a baby panda in the wild, but actually we were lucky enough to see a baby panda a few days before the end of the entire filming session. After seeing the baby and observing pandas in the wild, I realized that all they do is sit around in the trees for days. They didn’t really do much but sleep. I feel like the wild pandas are missing out on the fun of what captive pandas get to do.

In kindergarten, the pandas have a lot of fun in captivity, even though pandas are known to be solitary animals. All the babies spend time with each other and spend time with their carer. Ironically, after seeing what the baby panda does during the day, I feel like the wild panda baby is missing out on all the fun that captive babies are able to have.

What about the loss for the mother when her son leaves to grow up in the wild?

Lots of wild panda mothers have sons growing up in the wild. That’s something that happens to all of us, not only pandas. It’s something that we all have to go through in our life, growing up, having your own family and your own territory. I think in this case for them, their natural instinct will kick in and the mother will go on living. Next year, she would go into her mating season again, and hopefully, be able to have another offspring. And the baby would learn his way and hopefully, successfully live in the wild as a released panda. So, that’s something that’s just sort of nature, really.

Why do they play in captivity and not in the wild? Are there any other behaviors that are unique to captive pandas?

I feel like the reason they play in captivity is that they are confined to each other in the enclosure. This close environment overtakes their natural instinct of being a solitary animal. In the wild, pandas have thousands and thousands of miles of land that they can thrive in and they rarely see each other. This is one of the reasons why they’re solitary. When they’re young, they’re very vulnerable, and one of their natural instincts to protect themselves is to climb up trees. Therefore, they are not able to socialize on the ground like the captive pandas.

There are a few things that really stand out to me about wild pandas. The first is how much they vocalized over the mating season, which is between the end of winter and the beginning of spring. Their calls would echo the whole mountain. This is one of the main ways we track pandas in the wild, by following their calls. Another thing I noticed is how camouflaged they are. You wouldn’t really think that they’re camouflaged by looking at them, based on their shape and their colors. In fact, you would think they would really stand out. But as a matter of fact, in the wild when they are inside bamboo forests in between the shades and the lights and reflecting by the bamboo leaves, you really can’t see them, even when they are probably meters away. They are very, very well hidden within the bamboo. And I think those are the two main things that I found most surprising and something that I wasn’t really expecting, seeing pandas in the wild.

***Answers were edited and condensed for brevity and clarity.