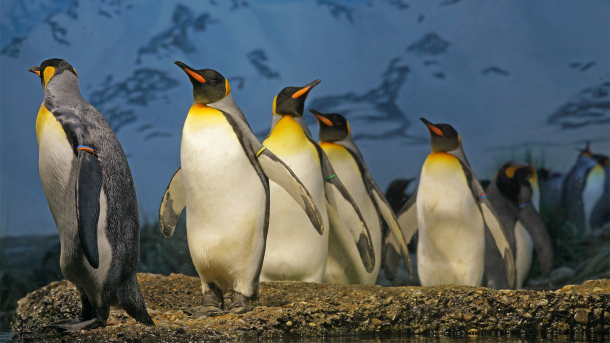 Penguins: a group of aquatic flightless birds that live almost exclusively in the Southern Hemisphere.

There are 18 species of penguins that live almost exclusively in the Southern Hemisphere, with only one species, the Galápagos penguin, found north of the Equator.

The blue penguin, (Eudyptula minor), also called little penguin, little blue penguin, or fairy penguin, are the smallest of the penguins. Adults average about 10 to 12 inches in length and weigh between 2.2 and 3.3 pounds, with males being slightly longer and heavier than females. 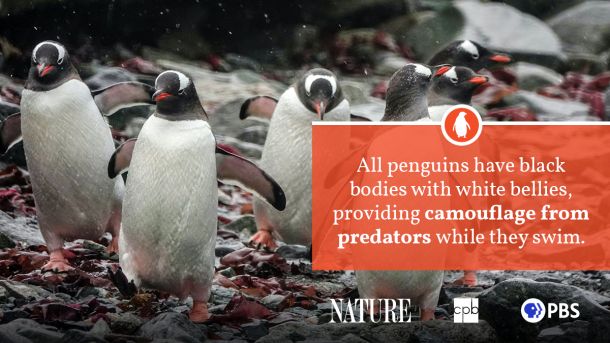 Penguins are flightless birds with flippers instead of wings. Their bodies are adapted for swimming and diving in the water, with some species able to reach speeds up to 15 miles per hour. Their body shape is fusiform (tapered at both ends) and streamlined, allowing them to be expert swimmers. They have a large head, short neck, and elongated body. Their tails are short, stiff, and wedge-shaped.

Their legs and webbed feet are set far back on the body, which gives penguins their upright posture on land. When snow conditions are right, they will slide on their bellies.

A penguin’s feather pattern makes it look like it’s wearing a tuxedo. Its feather pattern is a form of camouflage called countershading with a black body and a white belly. This coloring helps camouflage the bird in the water as it searches for prey.

Their coloring and pattern vary by species. 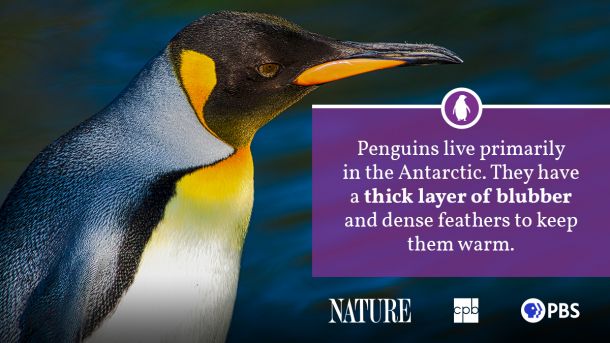 Penguins eat krill, squids, and fishes. Their diet varies slightly on the species of penguins, which have slightly different food preferences. This reduces competition among species.

The smaller penguin species of the Antarctic and the subantarctic primarily feed on krill and squids. Species found farther north tend to eat fishes. For example, in Antarctica, Adélie penguins feed primarily on small krill, while chinstraps forage for large krill. While the larger species, including Emperor and king penguins, mainly eat fishes and squids. 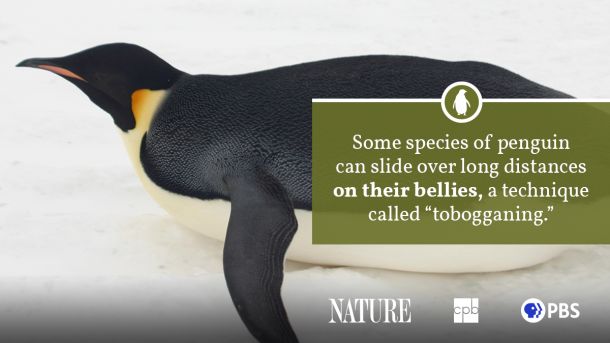 Penguin habitats include oceans and coasts. They generally live on islands and remote continental regions with few land predators, where their inability to fly is not detrimental to their survival. They are adapted to living at sea, and some species can spend months at a time at sea.

Different species thrive in varying climates. While the Galápagos penguins live on tropical islands at the equator, the emperor penguins are restricted to the pack ice and waters of Antarctica. 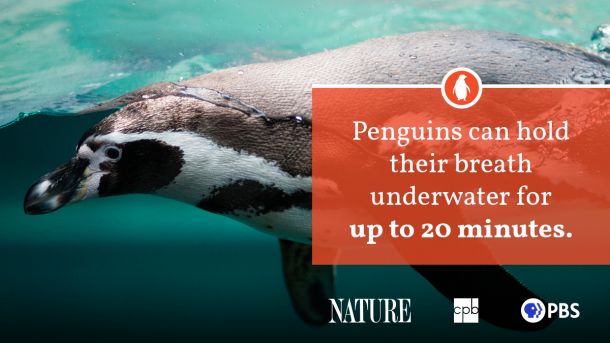 Most penguin species of penguins are monogamous, where one male breeds only with one female during a mating season. Some female penguins may have one to three partners in one season and some males may have one or two partners.

Penguins meet at nesting sites to breed and lay their eggs, and most penguin species tend to be faithful to the same rookeries and return each year. Mature birds often return to the same rockery where they hatched for breeding season, leading to large populations at the same rockeries. The males tend to arrive first to establish and defend their nesting site. Nesting habitats vary on species, however, the rockeries sometimes consist of multiple species. For example, Gentoo penguins have been found nesting near Adélie and chinstrap penguins.

The female penguin typically lays two eggs, with the exception of emperor and king penguins, which only lay one egg. A nest of eggs is called a clutch, and a clutch with more than one egg presents a better chance of at least one chick surviving. The egg color ranges from white to bluish or greenish and the shape varies among species.

The incubation period, which the time spent warming the egg before it hatches, varies among species, ranging from one month with erect-crested penguins to 66 days with emperor penguins. During the incubation period, mates take turns incubating the egg, allowing one partner to leave to feed for several days at a time.

Emperor penguins are the exception to this incubation period. The female emperor penguin transfers a single egg to the top of her mate’s feet. While the female goes to sea to feed for several weeks, the male incubates the egg. When the female returns to her mate, the egg is typically about to hatch. During the courtship, nesting, and incubation periods, the male fasts and lives off reserves of body fat. He loses up to 45% of his body weight during this time.

Penguins are among the most social of all birds. All species of penguin are colonial, meaning that they live in large groups. During the breeding season, penguins come ashore and nest in huge colonies called rookeries. Rookeries can consist of hundreds of thousands of birds and span over hundreds of square miles.

Penguins often swim and feed in groups, but some may dive for prey alone. Emperor penguins have been observed feeding in groups with coordinated diving.

Penguins also communicate with each other and exhibit intricate courting and mate-recognition behavior. They communicate by vocalizing and performing physical behaviors called “displays,” using these displays to communicate nesting territories and mating information. Penguins have been observed using displays in partner and chick recognition, as well as in defense against intruders. 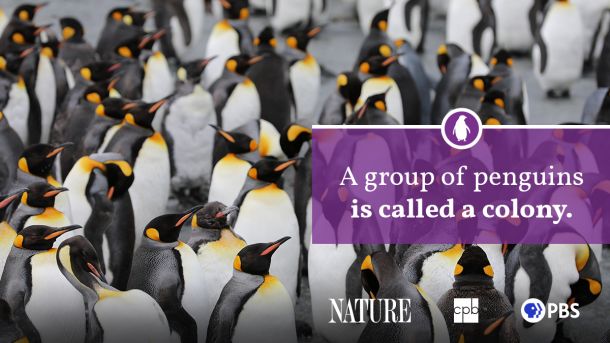 The average life expectancy of penguins is likely around 15 to 20 years, with some individuals live considerably longer. There is a high mortality rate among the young. For example, the emperor chicks may experience a 90% mortality within the first year of life and about 50% of king penguin chicks will not survive due to winter starvation. 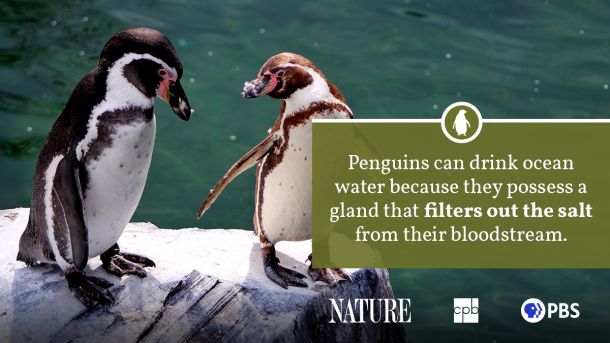 Penguins have predators both on land and in the water. In the water, penguins may become prey to leopard seals, fur seals, sea lions, sharks, or killer whales. On land, penguin chicks and eggs may be hunted by foxes and snakes, as well as introduced predators like feral dogs and cats. Predatory birds, including sheathbills and giant petrels, also prey on penguin chicks and eggs.

Climate change is another major threat to penguins living in Antarctica like emperor penguins and Adelie penguins. These species rely on the region’s ice sheets to breed and hunt. As sea ice melts due to warmer temperatures related to climate change, these species are losing their habitat. According to a 2008 World Wildlife Fund (WWF) study, an estimated 50% of the emperor penguins and 75% of the Adelie penguins will likely decline or disappear if global average temperatures rise above pre-industrial levels by just 2 degrees Celsius.

Other major human threats to penguin species include overfishing, bycatch, hunting, and pollution. According to WWF, commercial fishing in the Southern Ocean region can increase competition among penguin species, as the number of available fish to eat declines. Commercial fishing can also lead to the accidental capture and drowning of penguins in fishing nets. 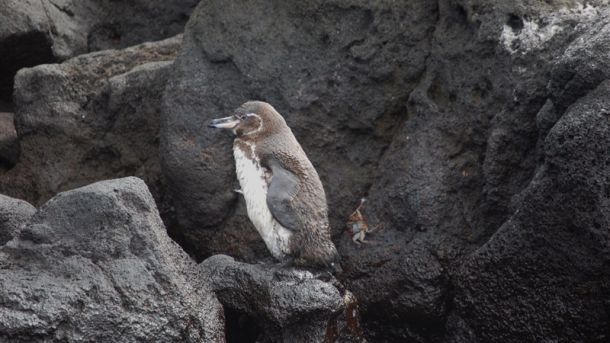 All species of penguins are legally protected from hunting and egg collecting by the Antarctic Treaty, which was signed by 12 nations in 1959. It was reauthorized in 1991 to protect Antarctica and preserve its living resources. The Treaty makes it illegal to harm, or in any way interfere with, a penguin or its eggs.