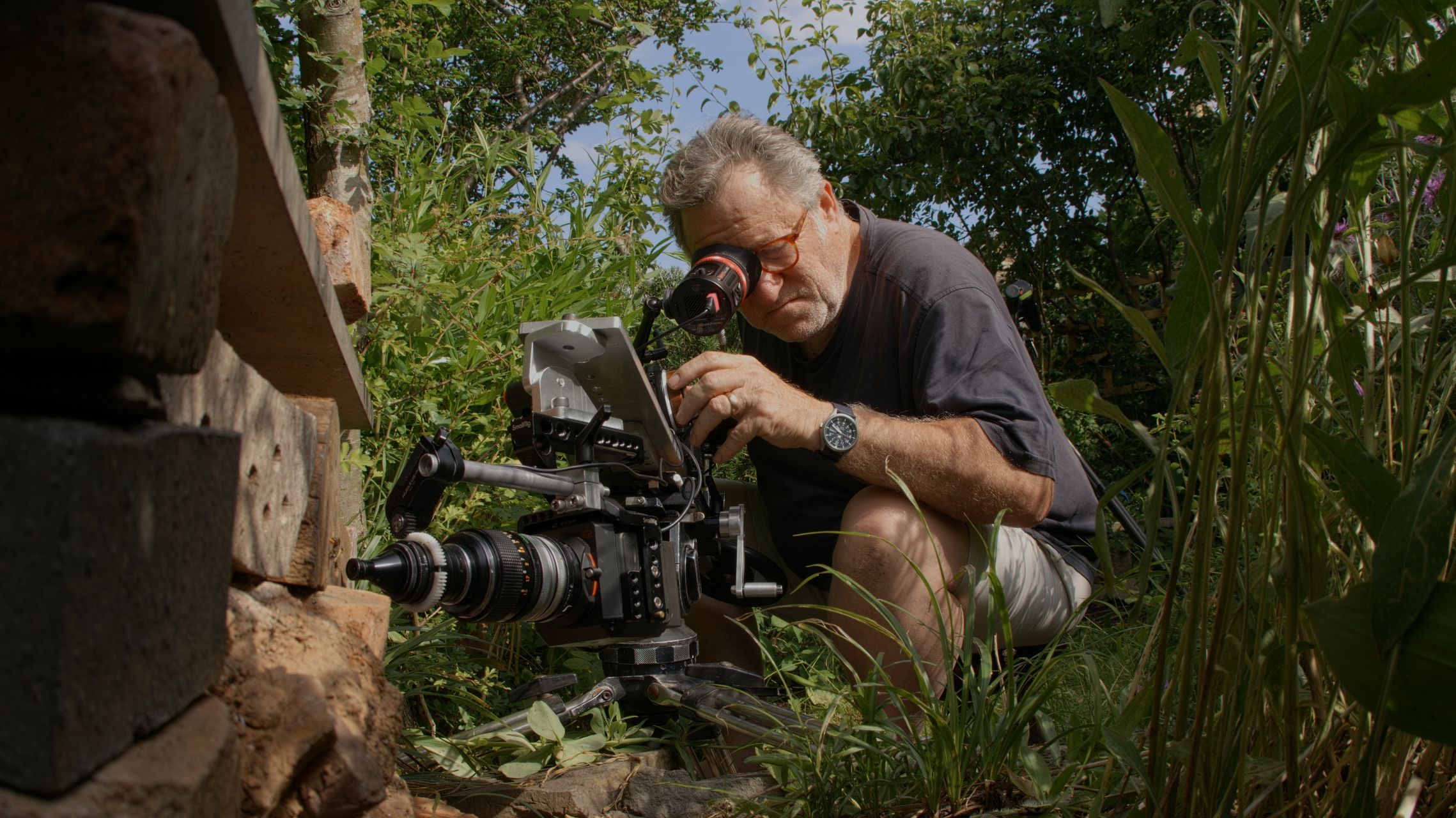 Taking refuge from the coronavirus pandemic, wildlife filmmaker Martin Dohrn set out to record all the bees he could find in his tiny urban garden in Bristol, England, filming them with one-of-a kind lenses he forged on his kitchen table. See his surprising discoveries in NATURE’s 40th season premiere, My Garden of a Thousand Bees, premiering nationwide Wednesday, October 20 at 8 p.m. ET on PBS (check local listings), pbs.org/nature and the PBS Video app.

Can you tell us a bit more about the origins of this project? What was it about being in lockdown that generated the idea to begin filming bees?

In my spare time, I had been studying the wild bees in the garden for around ten years. I had been photographing them in order to find out how many species there were. At first, I thought there might be as many as ten different species, and that I could record them all in one summer. I was very wrong. I think there are around 60 species – not all of which I have been able to identify beyond genus.

I had thought about making a film about these wild bees, but broadcasters seemed very indifferent to the idea. I also knew it would be technically very difficult to do more than just film bees on flowers, so in a way was a bit relieved when nobody asked me to do it.

Before lockdown, I was starting a different project on wetlands. But when lockdown happened, I realized I would be stuck at home for quite a while, and the bee season was already just underway. It was now or never. If I mucked around looking for funding, advice, or equipment, I would miss some of the best bits. I just had to get on with filming what I could.

What were some of the most surprising things you discovered?

I think the realization that the bees were all watching me on a daily basis was a surprise. Some early spring bees turned out to be so scared of me, they never overcame their fear and were basically unfilmable. I had to stay away so they could get on with their lives. But as I spent more and more time in the garden, many bees became more used to me and generally easier to film. If I hadn’t spent literally every sunny day in the garden, I think I would have seen far less behavior. It got to the point where bees would land on the camera, or where I could film very close to their nest holes as they just ignored me.

Your story may inspire others to go out and discover the unnoticed dramas and details occurring in their own backyards. What is your advice for these people?

Perhaps one of the keys to understanding behavior is being able to identify which animal you are looking at. There are many flies that mimic bees, especially in the hoverfly family. Being able to know whether you have hoverflies or bees is a start. But there are many other bees that look like wasps. When you know the difference, you can begin to unpack what they are all doing. Being able to tell the difference between the different species of bee is also incredibly useful. Spend time watching them (see above), take photos, get an insect book and try and identify them.

When you know “who” you are looking at, then you can begin to observe their behavior, and perhaps even film it. Read about what is known about their behavior (often very little). You never know, you may be able to make new observations.

What are some of the top things people can do to help bee populations in their own areas?

1. Keep all insecticides as far from bees as possible – even to the extent of keeping commercial cut flowers or non-organically grown vegetables out of the compost heap.

2. Allow indigenous plants (known by some people as weeds) to spread. If bees visit them, keep them. If not, perhaps remove them and make space for those that do. (If it’s in your own garden. Out in the wild, let the plants sort themselves out.) Many garden centers sell wildflowers, some of which are bee favorites.

3. Domesticated garden plants are often of no use to bees, as they have been bred to have spectacular flowers at the expense of giving nectar and pollen. But there are other garden plants the bees love. Different species of bee like different kinds of flower. So, in the end, diversity is also useful. From one year to the next, you will be able to see which flowers attract the best bees.

4. Often the limiting factor in bee numbers is nest sites. There are many you can buy on the internet, often made of tubes or wooden tunnels. Some have clear plastic sides so you can see what’s going on. But other bees like rotten wood, especially dry logs with lots of sun, and a large number like to make burrows in the soil. In almost all cases, they like it dry or well-drained. Sand mixed with soil is a popular consistency. Bees also like the sun. Lots of sun. So nest sites are going to be most successful in sunny corners.

How does macro photography differ from typical wildlife filmmaking? Are there other animals you’d like to film in this way that you haven’t got a chance to yet?

Macro photography is harder than normal photography because as things get smaller, they become much harder to get in focus. Vibrations become an issue. If you are taking still photographs, flash will be very helpful. If you are taking movies, a good tripod will be useful. But the latest range of smartphones also have slow motion and macro modes, and may well be able to record incredible behavior.