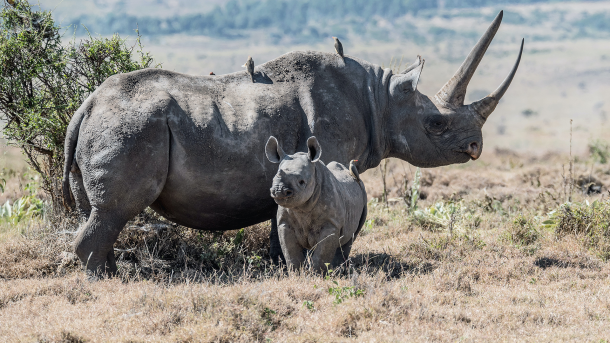 While nearly 100 known rhinoceros species have existed throughout the eons, there are currently five species of living rhinos. Two rhino species can be found in Africa and three species can be found in Asia. The two African species are the black rhino (Diceros bicornis) and the white rhino (Ceratotherium simum). The three Asian species are the Sumatran rhino (Dicerorhinus sumatrensis), the Javan rhino (Rhinoceros sondaicus), and the greater one-horned rhino (Rhinoceros unicornis).

While 500,000 rhinos roamed Africa and Asia at the beginning of the 20th century, rhino numbers dropped to 70,000 by 1970. Now, as few as 29,000 rhinos remain in the wild. The remaining rhinos can be found outside national parks and reserves. Three species of rhino (black, Javan, and Sumatran) are critically endangered. 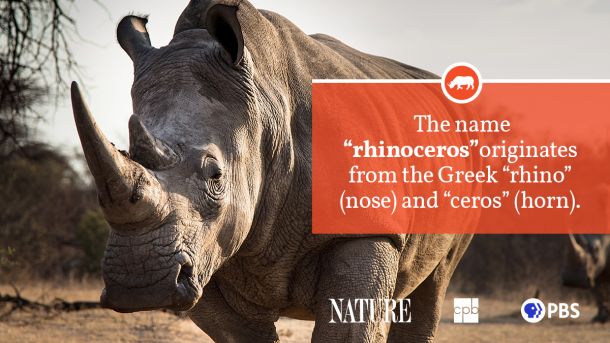 Rhinos vary in size and weight depending on the species. Their height can range from 4 to 10 feet. Sumatran rhinos are the smallest of the living rhinos. On average, their height is between 3.3 and 5 feet, their length is between 6.5 and 13 feet, and their weight is 1,320 to 2,090 pounds.

Black rhinos are the smaller of the two African rhino species. On average, their height is 5.2 feet and their weight is between 1,720 and 3,080 pounds. The white rhino is the larger African species, weighing 3,080 between and 7,920 pounds and standing at a height between 5 and 6 feet. 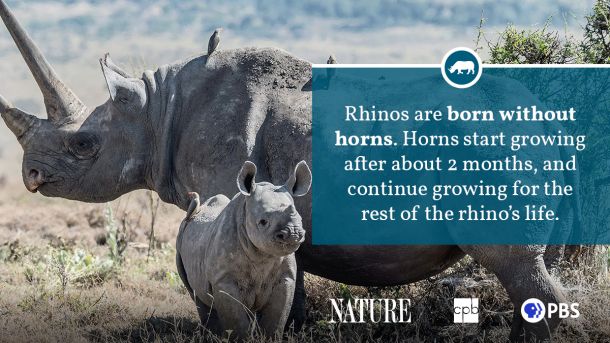 The rhinoceros gets its name from one of its most notable features: its horns. The word rhinoceros come from the Greek words rhino meaning “nose” and ceros meaning “horn.” The number of horns that a rhino has varies on the species. The two African species (the black rhino and the white rhino) and the Sumatran rhino have two horns, while the Javan rhino and one-horned rhino have one horn.

Rhinos have thick but sensitive skin, the blood vessels are close to the skin’s surface. Thus, it can be easily scarred. To protect themselves against sunburn and insect bites, rhinos soak in mud or roll in dust.

Rhinos’ appearances vary depending on the species. The Sumatran rhinos are the smallest of the living rhinos. They are covered with long hair and are more closely related to the extinct woolly rhinos than any of the other rhino species alive today.

Both species of African rhinos, black and white rhinos, are the same color. They’re both brownish-gray. Of the two African species, black rhinos are the smaller species. The most notable difference between white and black rhinos is their hooked upper lip. White rhinos are known for their square lip, which distinguishes them from the black rhino. Black rhinos are browsers rather than grazers, and their pointed lip helps them feed on leaves from bushes and trees. Black rhinos have two horns, and occasionally a third, small posterior horn. 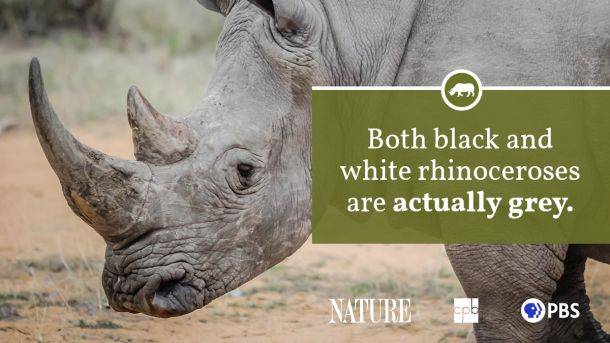 All five species of rhinos are herbivores, eating mainly vegetation. They spend most of their time browsing and grazing through their natural habitat in search of plants and grasses to eat. The specific types of food that each of the species eats depend upon their habitat and location. Rhinos are one of the few remaining megaherbivores, which are plant-eaters that weigh more than 2,000 pounds.

While rhinos once roamed great portions of Africa and Asia, their range has decreased dramatically in recent years. Rhinos can currently be found in Borneo and Sumatra, Namibia, the Eastern Himalayas, and Coastal East Africa. Their location depends on species. For example, the Sumatran rhino can be found on the Indonesian islands of Sumatra and Borneo. Meanwhile, the white rhino and the black rhino can be found in Africa. 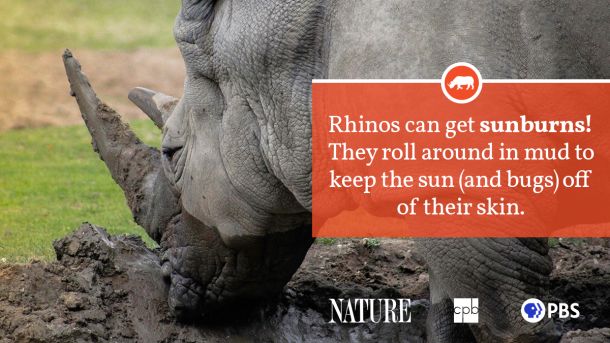 Female rhinos give birth to a single calf, which can weigh over 100 pounds. Rhino breeding patterns depend on the species and its habitat. The mother may stay with her calf for up to four years unless she has another baby, in which case she pushes her older calf into independence to make way for the new arrival. Sumatran rhinos are the exception, where the mother will only stay with the calf for two to three years, even if the mother does not have another newborn for another two years.

For the Sumatran rhino, only two captive females have reproduced in the last 15 years. When born, their calves have a dense covering that turns reddish-brown in young adults. This covering later becomes sparse, bristly and near black in older animals.

White rhinos, which have a complex social structure, have different breeding patterns. The home range for adult females can be more than seven times larger than males, depending on habitat quality and population density. Breeding females are prevented from leaving a dominant male’s territory, which is marked and patrolled by its owner on a regular basis. Males will compete over a female, which can cause a conflict where the males will use their horns and massive size to inflict wounds on their competitors. 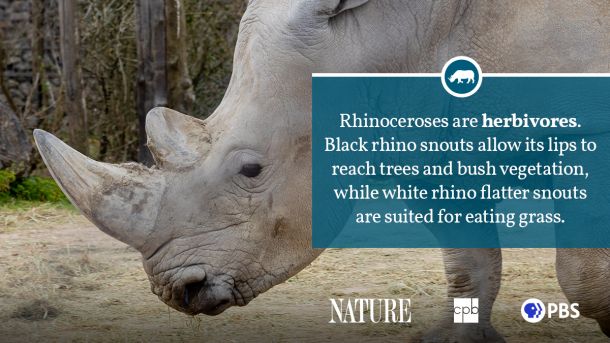 Several species of rhinos are endangered with small populations remaining. For example, the remaining Sumatran rhinos live in small, fragmented non-viable populations. There are limited possibilities to find each other to breed, thus its population continues to decline. Meanwhile, there are only 58 to 68 Javan rhinos remaining, which only live in Ujung Kulon National Park in Java, Indonesia.

The two species of African rhinos live in home ranges that can sometimes overlap with each other. Their feeding grounds, wallows, and water holes may be shared among other local rhinos. Of the two African species, the black rhino is usually solitary, while the white rhino tends to be more social. White rhinos have complex social structures. Groups of sometimes 14 rhinos may form, which typically includes females and their calves. White rhino adult males defend territories of roughly one square mile, which they mark with vigorously scraped dung piles.

The one-horned rhino is solitary, except when adult males, or rhinos nearing adulthood, gather at wallows or to graze. The males have loosely defined home ranges that are not well defended and tend to overlap. During the day, they primarily graze, with a diet consisting almost entirely of grasses.

Rhinoceroses’ lifespans vary on species. A rhino’s lifespan is typically 40 to 45 years.

Javan rhinos are the most threatened of the five rhino species and are found in only one protected area in the world. The species is extremely vulnerable to extinction due to natural catastrophes, habitat loss, diseases, poaching, and potential inbreeding.

Sumatran rhinos compete with the Javan rhino for the title of most threatened rhino species. While surviving in possibly greater numbers than the Javan rhino, Sumatran rhinos are more threatened due to habitat loss and fragmentation. The remaining animals survive in small, fragmented non-viable populations, and with limited possibilities to find each other to breed, its population decline continues. Just two captive females have reproduced in the last 15 years.

Poaching is the largest threat to the one-horned rhino. Their horn is used in traditional Asian medicine. Habitat loss due to expanding human populations is another major threat.

In Africa, wildlife crime is the biggest threat to both black and white rhino. The white rhino has been near extinction for decades to the rampant poaching for rhino horn. Habitat loss is another major threat to both species. 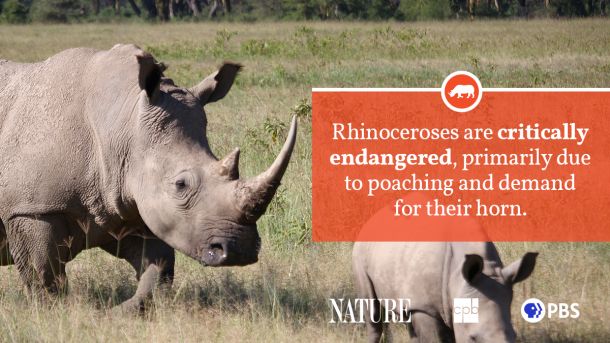 One-horned rhinos came very close to extinction. By the start of the 20th century, around 200 wild greater one-horned rhinos remained. However, conservation efforts have brought their numbers up to about 3,500 rhinos. The one-horned rhino is now classified as Vulnerable.

While black rhino numbers have doubled from their historic low 20 years ago to between 5,042 and 5,455, they are still classified as Critically Endangered. Meanwhile, the other African species, white rhinos are the only of the five rhino species not listed as endangered. With a population size of less than 19,600 to 21,000, white rhinos are classified as Near Threatened.

Northern white rhinos, a subspecies of rhino, are on the brink of extinction. In 2018, the last male northern white rhino, Sudan, died. The two remaining females, who reside at Ol Pejeta Conservancy in Kenya, are too old to reproduce. The only hope to save the subspecies is to use in-vitro fertility treatments. Scientists used sperm from both Sudan and another male that died earlier to fertilize two eggs from the females, Fatu and Najin. 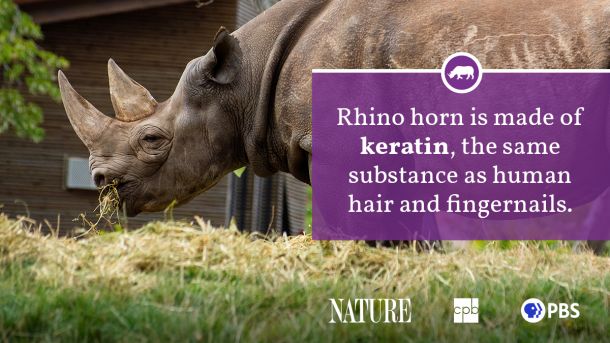 As the population of rhinos continues to decrease, conservation groups and local governments are working to protect these endangered species. The illegal wildlife trade and poaching are some of the largest threats to these species. To protect rhinos from poaching, African countries began working to protect their rhinos, China no longer approved the use of rhino horn for traditional medicines, and countries in the Middle East promoted dagger handles made of synthetic materials. These efforts reduced rhino poaching drastically.

Conservation efforts, including intensive anti-poaching and habitat protection efforts, have helped some wild rhinos make a comeback. For example, poaching has been almost eliminated in Indonesia, largely due to the country’s Rhino Protection Units.

The greater one-horned rhino has made a dramatic recovery thanks to conservation efforts, and the recovery is considered one of the greatest conservation success stories in Asia. At the start of the 20th century, there were only 200 remaining greater one-horned rhinos. There are now more than 3,700 rhinos. The species was saved from the brink of extinction through strict protection and management action from Indian and Nepalese authorities and their partners.

One of the more peculiar methods for saving the species: dating apps. The Ol Pejeta Conservancy created a dating profile for Sudan in 2017, asking for donations on the dating app Tinder. Sudan, a 43-year-old northern white rhino, is the last male of his subspecies. He is not able to naturally reproduce with the remaining two females, so scientists were hoping to use in-vitro fertility treatments. The treatments could cost millions, so scientists were asking for donations through Sudan’s Tinder profile.