Phil Dalton, Huw Williams and Matt Gordon of John Downer Productions answered NATURE’s questions about creating the spy creatures that star in NATURE’s recent miniseries, Spy in the Wild 2. The filmmakers also discuss how the spies have evolved since the first miniseries premiered on PBS in 2017.

The first episode of Spy in the Wild 2 premieres and streams on Wednesday, April 29, at 8/7c (check local listings). 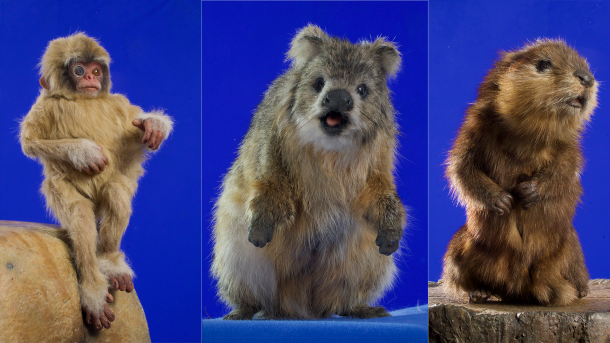 Q: Can you walk us through the process of building your spy creatures?

MATT:
The process of building the spies is complex and varied depending on what animal and behavior that we are trying to film. Spy gorilla, one of the stars of the show, is a good example to use in describing the process of building them. Firstly, we need to work out what spy animals would be best to film the animal. So for example, it would not be a good idea to make a spy Silverback Mountain gorilla, as this could be seen as too much of a threat to the real mountain gorillas. Therefore, we went with a baby gorilla.

Not only were we, the producers, all being biologists and zoologists, but we also enlisted the help and knowledge of scientists and experts when building the spy creatures. We would ask these experts what features we should concentrate on. Therefore, for the gorillas, the eyes were extremely important.

Mountain gorillas learn a lot from each other by staring into each others’ eyes. Therefore, we designed the spy gorilla to be able to close and move his eyes so that when necessary, he could avert his gaze to show respect to the real gorillas.

The artists looked at dozens of videos and images of the animals in the wild to make them look as realistic as possible. It’s also about puppeteering. It is important to learn how animals move. We often have professional animatronic engineers come out with us in the field to control the spy creature. The engineer makes the creature move in the most realistic way possible.

HUW:
The process of building our spies is a combined effort of a number of different model makers from around the world. Our task is to work closely with them to make the creatures look and act the way that would best suit the subject and the behavior we hope to film. We get the spies to behave in ways that would initiate a neutral or friendly response. When making the spies, the amount of detail that goes into them can be staggering.

Our turtle was built to get close to the wild turtles to witness the great arribada, where thousands of turtles come ashore to lay their eggs. This spy turtle was able to get closer than people were allowed. As you can see, the spy turtle looks incredibly realistic and even gulps like the real turtles. There were even times when you looked at the beach and couldn’t tell which was our spy and which were wild turtles. 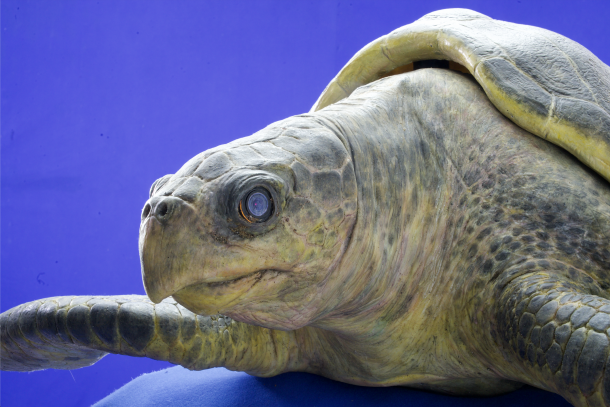 The koala, on the other hand, was built to be able to be put in location before the koalas turned up in standby. Then, when the koalas approach, spy koala can be remotely fired up. As you can see the facial expressions give him great character and make him look like the real thing. 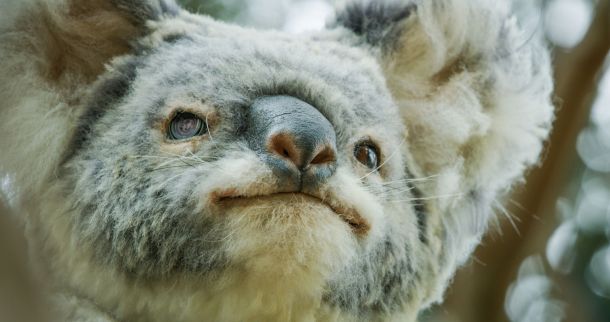 The koala, on the other hand, was built to be able to be put in location before the koalas turned up in standby. Then, when the koalas approach, spy koala can be remotely fired up. As you can see the facial expressions give him great character and make him look like the real thing.

Q: Which spy was the hardest to build and why?

MATT:
There were a few that were more complicated to build than others. For example, spy otter had to swim and film in the sea. It not only needed to be waterproof but also needed to cope with the strong currents, while still trying to move and look like the real sea otters. This took hours of meticulous work in punching in hairs of various colors to make it look as realistic as possible.

Then we might need another spy creature to fly. Using the latest drone technology is one thing, but when this has to be incorporated into a spy creature, such as spy Bald eagle or pelican, our engineers have to overcome so many challenges from the added weight to extra wind resistance. 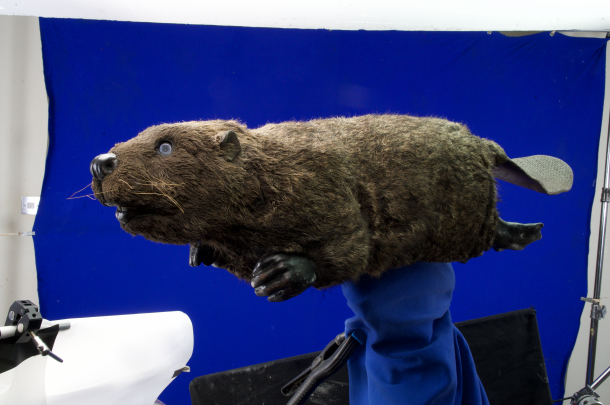 However, one of the most fascinating processes to watch and one of the most complicated is when our animatronic engineers have to make a spy creature in which small movements and intricate facial expressions are vital in getting it accepted among the real animals. This was extremely important for spy gorilla.

As mentioned earlier, blinking, eye movement and being able to move its arms and head were extremely important. It involved dozens of servos and moving parts. Because the eyes are so important in gorilla communication, getting a camera small enough to fit into the eye and blend in so beautifully so that it looked as natural as possible is no mean feat. All this level of detail in my mind made it one of the hardest to build.

PHIL:
As a second example, I would say the spy hummingbird was another technically challenging build. We wanted to make a small spy creature that could explore and maneuver through a forest and film one of the most fragile creatures in the entire series, monarch butterflies. We knew hummingbirds share their habitat and so this was our inspiration. The goal was to make a hummingbird to scale, about 20 centimeters from head-to-tail, hover in all directions, be as quiet as possible and have no exposed moving parts, as well as carry a 4K camera. After many prototypes, we managed to make spy hummingbird, weighing just 70 grams. It could hover just like the real thing. It was also totally harmless to the butterflies with shields to protect the butterflies from coming into contact with moving parts. The butterflies could even land safely on spy hummingbird’s wings. The results were sensational, filming the migrating swarms through the forest, wingtip to wingtip. 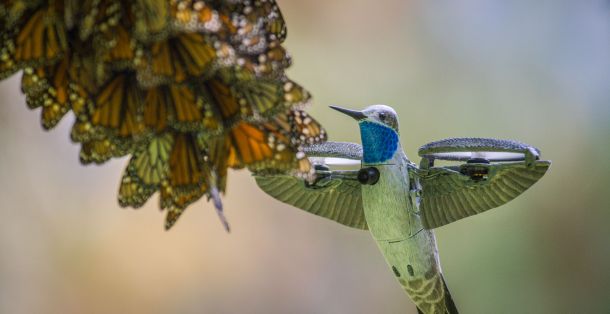 HUW:
The spy turtle was another hard one to build as it had to be able to withstand the surf splash zone. She was definitely one of our most complex spy creatures. The level of detail to make her as realistic as possible took time, but as you can see it really paid off. She can walk, move her head (with a camera in the eye) and even lay “spy eggs”. Her own batch of eggs with cameras inside. Because she could perform so many different actions and the fact that she is as realistic as she is, made her one of our most difficult. 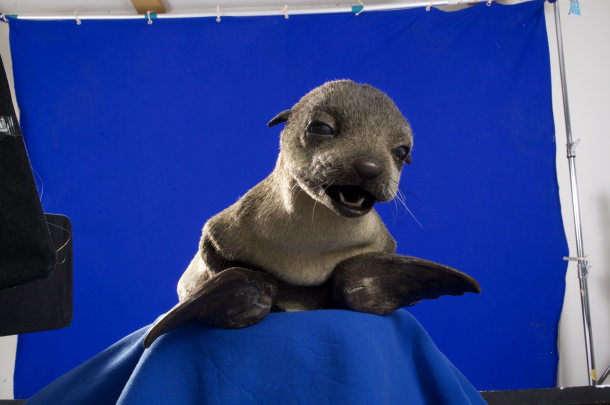 Q: What is it like when the spies interact with each other (or house pets!)?

MATT:
While this is not something we’ve specifically looked at, one thing we have noticed on Twitter is the number of people who post pictures of their pets glued to the TV screen fascinated by our spy creatures. So maybe this is something we should explore further for another series?

HUW:
My dog Reggie has come across a few of the spies. He’s definitely keener on some than others. He gives Spy Croc a wide berth!

Q: What are the differences between series 1 and 2?

HUW:
When we set out to film Spy In the Wild 2 we knew we had to make the spy creatures even better than the first time around: make them look and act even more realistic than before, and make them a real step-up. With the latest technology, we were able to do that. The latest camera technology allowed better-stabilized shots, with higher res and aerial technology, which allowed us to explore an array of aerial spies. We also thought hard about animals that we hadn’t covered in the past and environments that we could really try to tackle. We filmed in the harshest environments around the world, filming in every continent. The second series really reveals behavior never seen before.

PHIL:
The main difference was the sheer number of original spy creatures. We had a total of around 35 specially built spies, which included a new generation of flying spies. Spy pelican captured never seen before feeding behavior of Mobula rays. Spy ray entered the heart of the largest gathering of Mobula rays ever filmed and was even able to leap with the real rays. Spy gorilla became a trusted group member of mountain gorillas and got close enough to record them singing, something never before achieved. These are just a few of the incredible moments from Spy in the Wild 2. 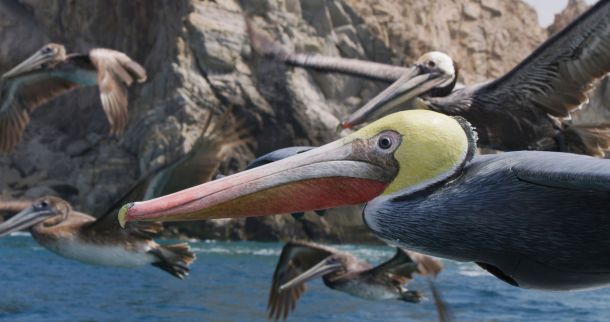 MATT:
I would add that the key difference that not only did the spy creatures look even more realistic than ever before, but they also had to behave like the animals. This allowed the spy creatures to be more involved in the heart of the action and to reveal behaviors that might not have been easy to film with traditional filming methods.

A good example of this was filming the Silverback Mountain gorilla controlling his group and telling them to step back from our spy gorilla so that he could explore this newcomer. Once he was satisfied, he then allowed the others in the group to get closer. Then we captured that magical interaction between the youngster and our spy gorilla.

Clip | Spy Sloth has an Admirer
Clip | Did You Know Gorillas Can Sing?
Preview: Spy in the Wild 2 - Episode 1: The Tropics