Weasels: They’re known as “sneaky and deceitful,” “treacherous and bloodthirsty,” we even associate the names “weasel,” “ferret,” and “badger” with negative behaviors, but when did this start? And are members of the weasel family really that vicious? 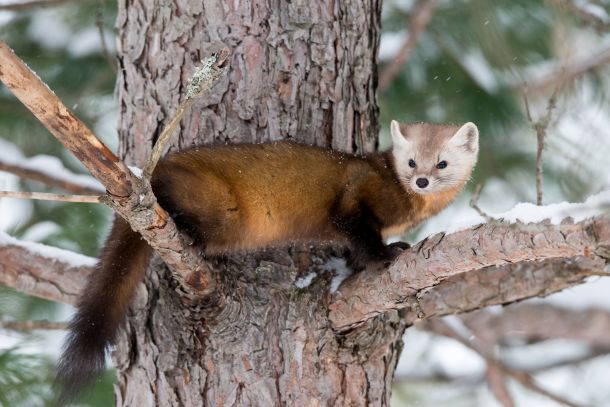 Pine Martens are an arboreal member of the mustelid family and are excellent climbers. They have semi-retractable claws and hunt food both on the ground and in the trees. Credit: © Paul J Hartley/Shutterstock

Part of the blame falls on pop culture. Weasels first appeared as the supporting antagonists in The Adventures of Ichabod and Mr. Toad. The animated feature is produced by Walt Disney Productions and premiered in theaters in October 1949. In the film, The Weasels are a gang of crafty thieves and crooks who serve the interests of their boss, Mr. Winkie.

Since their appearance in this early film, weasels continue to appear as the antagonist in many Mickey Mouse & Friends films. They are typically employed as henchmen by more powerful villains, according to Fandom. You can also see evidence of this in Who Framed Roger Rabbit and several other fictional children’s programs and books.

But there are links to this stereotype based in reality, which gives humans reason to believe weasels are deceptive and ill-intended.

Part of weasels’ bad reputation stems from their historic feud with chicken farmers. Weasels slender, flexible bodies allow them to slip into chicken coops through unprotected holes in the wall. Once inside the coop, they will raid the nests and will attack the birds.

While most weasels prefer rodents to chickens, they will hunt fowl if the chance arises. This behavior led many farmers to view weasels as sneaky, devious creatures.

In addition to being opportunists, weasels often wrangle more food than they can eat in a single sitting, likely because of their high metabolisms. This behavior led the carnivores to be labeled as especially vicious and bloodthirsty murderers.

Weasels store this extra grub in cache sites, including abandoned animal burrows. Nearly 150 dead voles were found stashed in one of these sites.

This impulse to kill more than they can eat explains why weasels have been known to slaughter every chicken in the coop. While it makes sense from an evolutionary standpoint, farmers may not view this practice as kindly.

What do you think? Are weasels worthy of their bad reputation?