Whale sharks are the largest known extant fish species. Their name “whale shark” comes from its size, being as large as some species of whales and also to its being a filter feeder like baleen whales. 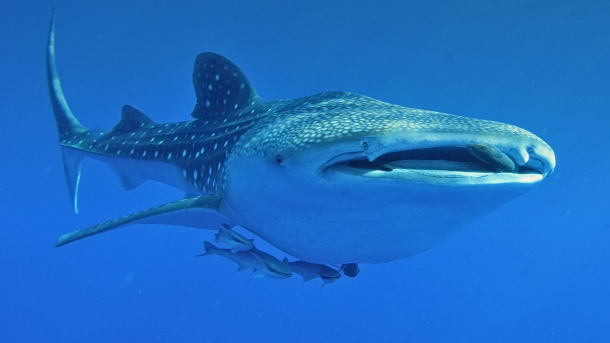 Whale sharks are the world’s largest fish, measuring up to 45 feet in length and adults weigh about 41,000 pounds. Their mouth alone stretches four feet wide. Whale sharks are the largest shark species, and ironically, are benign. They are considered harmless and are often referred to as “gentle giants.”

A whale shark’s large mouth is at the very front of its head, as opposed to the underside of the head like most shark species.

The whale shark is a filter-feeding carpet shark, meaning that it can neither bite nor chew. Whale sharks have thousands of tiny teeth that they can only shrimp fish and plankton by using its modified gill rakers as a suction filter.

Whale sharks are slow swimmers, moving at speeds of no little more than 3 miles per hour. They swim extreme distances because they need enormous amounts of plankton and coral spawn to power their bulk of up to 90 pounds per day. Despite their large mouths, plankton is strained and swallowed by a throat so small, it’s just the size of a coin.

Whale sharks are typically accompanied by a number of free-loaders. Remoras, or suckerfish, often accompany whale sharks everywhere they go and position themselves to ensure they don’t miss any scraps.

A whale shark can process more than 6,000 liters of water an hour through its gills.

The whale shark is found in open waters of the tropical oceans and is rarely found in water below 70 degrees Fahrenheit.

Whale sharks can be found in all temperate and tropical oceans around the world except the Meditteranean Sea. They migrate thousands of miles to different feeding grounds.

Little is known about their breeding and social structures. Whale shark females produce eggs, but the young hatch inside of the mother instead of in the water like most fish. A female giving birth has never been observed. It is not known where pupping occurs or where the youngest animals situate.

Upon giving birth, the mother whale shark leaves her young to fend for themselves. It is estimated that less than 10 percent of whale sharks born survive to adulthood. At age 25, whale sharks reach sexual maturity and will have their own young.

Adults are often found feeding at the surface but may dive to 1000m. While whale sharks are solitary creatures, they often share their feeding grounds with other whale sharks.

It is believed that whale sharks may have a lifespan of 100 to 150 years.

According to the World Wildlife Fund (WWF), unregulated and unsustainable fisheries are the main threat to whale sharks. Whale sharks are highly valuable on international markets for their meat, fins, and liver oil, especially in East Asian countries. Bycatch is another threat to the species, as they may become victims of accidental capture of non-target species in fishing gear. Marine tourism presents another threat to the species, as it can interrupt their feeding and the boat propellers can injure the sharks.

Whale sharks are listed as “Endangered” by IUCN’s Red List.

Conservation groups like WWF are working to protect this endangered species. WWF is helping to improve whale shark tourism. It is also conducting scientific research on the species to create a better understanding of its habitats. WWF experts are gathering information on individual whale sharks by using satellite tags, sonar devices and digital cameras. The information gathered will be used in developing further protections for whale sharks.