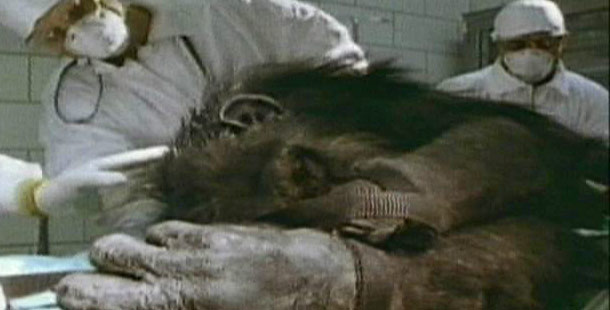 In 1923, Psychobiologist Robert Yerkes purchased two young chimps from a zoo for his own behavioral studies. These two chimps, named Chim and Panzee, would be the first of thousands to be used for the sake of scientific research in the United States. And while internationally, the use of chimps in research has declined over the last decade, in the US, chimps continue to be used in biomedical research. According to the Humane Society of the US, approximately 1300 chimpanzees live in 11 laboratories around the US-making the US chimp population the largest collective chimpanzee colony for biomedical research in the world.

It is a harsh irony that what makes chimps so like humans, makes them such sought-after research subjects. Sharing so much of our biological makeup (99% of DNA, in fact), chimps have been used in the study of infectious diseases, gene therapy, vaccine development, reproduction, language, behavior, even anatomy.

Though they can catch or be infected by nearly all known human infectious diseases, Hepatitis research remains the largest area of chimpanzee use in the US. Nearly one third of chimp research dollars in 2003 and 2004 went to Hepatitis studies. The research has virtually eradicated Hepatitis B and C infections acquired through blood transfusions, though critics of chimp research say the first Hepatitis B vaccine was made from the blood of infected humans.

Introduction What are the alternatives for medical research? Slideshow Interview with Gloria Grow, founder Fauna Sanctuary Caring for Captive Chimps Q and A with the filmmaker Video Links and books Download Wallpaper For Educators In the 1980s, during the height of the HIV and AIDS outbreak, chimps were aggressively bred as subjects for studies of the disease. But this breeding campaign would soon result in thousands of surplus chimps when they were found to be poor models – never developing full-blown AIDS.

Critics of chimp research argue that the case of HIV is not an isolated case of scientific indiscretion. Even in the case of Hepatitis, chimps respond differently from humans. Chimps infected with Hepatitis B will not become sick while humans exhibit traditional symptoms of liver disease. And chimps infected with Hepatitis C will not develop cirrhosis of the liver or liver cancer, though humans will. And in fact, with regard to drug development, 70% of drugs that have tested safe in nonhuman primates are known to be harmful to the human fetus.

Fortunately, science presents some possible solutions. In July of 2005, Hepatitis C researchers reported a breakthrough in the technology to grow the virus entirely in cell culture. And the vaccine for this disease is now made from bacterial culture.

Using human volunteers with a specific illness in clinical trials for new drugs is, say animal research critics, a more accurate and humane alternative to testing drugs in animals like chimps. Today, a great deal of Hepatitis research is successfully carried out through observation and clinical trials on humans with the disease. The perceived risks of participating in trails is getting smaller. In one form of human clinical trial, called micro dosing, human volunteers are given minute doses of an experimental drug too small to even have negative effects on the body. The physiological effects of the drug are then extrapolated using high tech laboratory equipment like a mass spectrometer. This method can be very effective, and was used during clinical trials for drugs to treat AIDS and HIV.

Unfortunately, human studies are expensive to undertake and are limited by a shortage of human volunteers. While it may be some time before they replace testing in animals such as chimps, they can still provide valuable clues as to how different classes of substances elicit their effects, and thus reduce the need for animal testing. They can also provide a much-needed framework for the development of alternatives based on human or animal tissue and cell systems.

In in-vitro testing on human cell cultures and tissues has become an emerging alternative. Conducted on living cells in containers such as a test tube or Petri dish, the method tests the toxicity of substances, essentially “in bulk,” meaning that large numbers of compounds can be screened rapidly and simultaneously in numerous cell lines, rather than in one individual animal. The method is not only much faster than animal tests, it is also more accurate since human cell lines are used. In-vitro studies on human cells and tissues have made possible the investigation of the immune-stimulating effects of potential vaccines and the analysis of HIV transmission.

New research tools and equipment can also provide alternatives to testing in animals such as chimps. By providing scientists with a clearer and more precise understanding of the physiology of disease(s), scientists can monitor actual patients of the disease they are studying at the cellular level. Techniques such as paper chromatography, radioimmunoassay, genetic engineering polymerase chain reaction, and positron emission tomography have all advanced our understanding of biomedical knowledge. Positive emission tomography, for example, can be used to safely and noninvasively examine the activated lymph nodes and spleens of patients given vaccines or to monitor viral infections in a temporal and spatial manner.

Of course, the genomic revolution has equipped scientists with unparalleled tools for engineering “personalized medicine.” Knowing the correlations between human disease and specific genes could allow doctors to prescribe the right drug at the right dose for the right person, based on unique variations in their DNA- not on the DNA of a chimp, or even a mouse.

While some of these techniques are years away, others are already here and in place. But as more viable humane options are uncovered, perhaps testing our drugs on chimps will seem less necessary and less ethical. And we can finally release chimps from their role as research subjects in our society.

Dogs in the Land of Lions
A Life Among the Clouds: A NATURE Short Film
Hippos: Africa's River Giants
Voyage of the Lonely Turtle
The Elephants of Africa
My Congo