From Save the Chimps:

Save the Chimps bid a sad farewell on Thursday, July 7, to one of our elder statesmen, Lou. Lou was born sometime between 1963 and 1964 in eastern Africa, and was captured and sent to Holloman Air Force Base in New Mexico in 1966. He spent the next 35 years in a cage, used repeatedly as a biomedical research subject and later as a breeding male. He eventually ended up in the custody of The Coulston Foundation (TCF), a research lab in Alamogordo, NM.

Lou’s life changed dramatically when TCF went bankrupt, and Save the Chimps rescued Lou and more than 260 other chimps. At the time, Lou was living with several other elderly male chimps, including Jeb, Roman, and the late George and Ted. Lou and the other “old men” quickly captured the hearts of Dr. Carole Noon and her team of caregivers. Lou had a very outgoing, friendly, and relaxed demeanor that endeared him to everyone he met. He always had an enthusiastic greeting for his caregivers, panting heartily and gazing into our eyes.

Lou eventually became the leader of a chimpanzee family, earning a reputation as a bit of a ladies’ man! Lou also had a cameo appearance in the Nature documentary “Chimpanzees: An Unnatural History,” but there was no sign that his 15 minutes of fame had gone to his head. He remained the kind and charming gentleman he always was. Lou and his family left their old lab cages behind forever in March 2007 to move to his new island home—called Lou’s Island– in Florida. Joined by his friends Olivia, Opal, Bam Bam, and Shellie, Lou was at last able to roam freely and enjoy the grass, trees, and hills that his island offered him. He had a favorite spot under the first platform, and would often neatly spread out a blanket to sit on as he enjoyed the fresh air and blue skies. 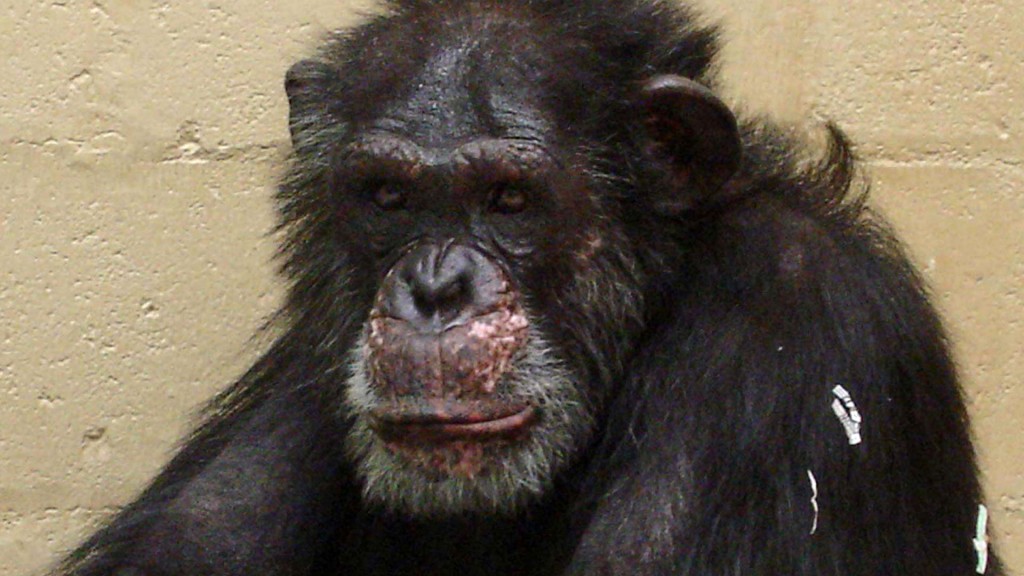 Lou was quite skilled at building massive nests of blankets—works of art that were the chimp version of a La-Z-Boy recliner. And like any typical retiree, Lou enjoyed spending a lot of time in his “recliner”, feet in the air and toes intertwined. He developed a friendly rivalry with his old friend Jeb, but never had a cross word for anyone (well, except maybe when he was displeased with young Braedon paying attention to the ever-popular Amanda.) He always comforted other chimps who were upset.

At times Lou was a picky eater, so his caregivers always made sure to spend extra time with him to encourage him to eat. He obviously enjoyed this special attention. Avocadoes and cooked potatoes were favorite foods, and he loved guzzling grape juice or protein shakes. Rumor has it he also really enjoyed an occasional snack of Doritos.

Lou fathered 29 children during his years as a breeder, including 7 residents of Save the Chimps: Tammy, Vanna, Cori Lyn, Pele, Bradley, Joey, and Jude.

Lou passed away suddenly while in the company of his chimpanzee family. He had just been given a mid-morning treat not fifteen minutes before, and had eaten a good breakfast that morning. Our veterinarian was in the area, and the chimps alerted her to his collapse. They refused to leave his side, however. The chimps’ love and concern, as well as confusion and sorrow, was evident. Although test results are pending, it is most likely that Lou died of sudden heart failure.

Lou’s loss has hit us all hard, but we are comforted by the fact that he passed peacefully in the company of his chimpanzee family, safe in a sanctuary. There is no doubt that we will deeply miss this amazing person. As one of his caregivers, Eron, put it, “He was the sweetest chimp I have ever met.”

You can watch a slideshow of Lou and learn more about the organization, Save the Chimps, on their website.

More From Chimpanzees: An Unnatural History (7)
Explore more from this episode More