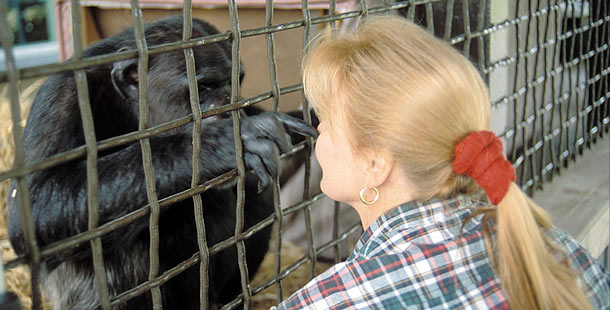 From studies of chimpanzees in the wild by researchers like Jane Goodall, we know that wild chimps develop close, affectionate bonds with members of their community. They maintain friendships, play together, groom each other, and even communicate through hugs, kisses, pats on the back, or tickles. But living an isolated existence, captive chimps may never even see another chimp, much less develop natural bonds. Living a life of captivity leaves deep scars and identity crisis — even in those chimps lucky enough to retire to a sanctuary like Fauna Foundation.

Fauna Foundation’s founder, Gloria Grow, says she has seen the traumatic effects of being locked up in every single one of her rescued research chimps. They’ve suffered so much,” says Grow. “Many of them have Post Traumatic Stress Disorder. We have to know that when we do these things to chimps, we’ve destroyed them. ” Even at a safe and comfortable sanctuary like Fauna Foundation, Grow says it’s common to see the chimps rocking, pulling their hair out, or having a tantrum.

Billy Jo, she says, was one of the most emotionally complex chimps she’s known-for good reason. When he was a baby in the circus, all of his teeth were knocked out with a crowbar. As a teenager at the Laboratory for Experimental Medicine and Surgery in Primates, a.k.a. LEMSIP, a New York University research facility that closed in 1997, Billy was infected with HIV, knocked down with a dart gun over 60 times, and endured 40 punch liver biopsies. In the lab he would shake his cage back and forth, trying desperately to prevent anyone from approaching. He even chewed off his digits. Even at the Fauna Foundation, Billy was plagued by anxiety attacks-attacks so bad that they left him choking, gagging and convulsing. “Billy could be violent and aggressive– throw feces, throw his food from the food cart,” says Grow

Grow says Billy could never be comfortable within a group of chimps and, as a result, he has had very few interactions with other chimps. But Billy eventually developed bonds with Grow and some of the other caretakers at the sanctuary, particularly women. “Billy was a caring, nurturing guy who liked to kiss people on the lips. He would drop everything for a woman,” says Grow. To draw out the gentle nature of this confused chimp, Grow’s tactic was to treat Billy as an individual, not as a wild chimp. She considered his history, his personality, and his needs. “Billy really appreciated when we were communicating with him. It’s like taking up their language,” she says.

Grow applies this approach to all of her chimps. She says she’s glad she didn’t try to learn everything she could about captive chimps before she rescued her group, or she would have it all wrong. “We call them people,” says Grow, “not chimps. “They have been displaced. They’re a displaced people. They’ve been raised by humans and they’re so confused by that.”

Grow says teaching the chimps to be chimps again is a gradual process-one that involves countless hours of human interactions and then gradual coaxing to interact with other chimps. “We had to teach them how to be chimps again.”

As Grow explains, once a chimp has been removed from the wild, there’s no putting them back. They have lost the window of opportunity to learn the ways of the community. For rescued chimps, understanding and giving people like Gloria Grow, Patti Ragan and Carol Noon are their only hope. But Grow says the effort, time, and patience of breaking the communication barriers are well worth it. “They’re pretty moving individuals. Communicating with them makes your hair stand up. They’re so intense.”