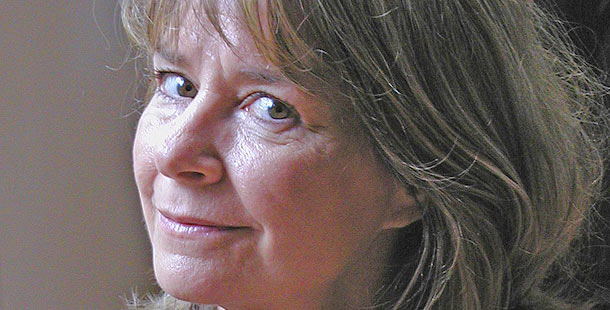 Allison Argo is an award-winning filmmaker and the writer, director, producer and narrator of Chimpanzees: An Unnatural History. Her previous film for NATURE, The Urban Elephant, won Emmy awards for Outstanding Cultural or Informational Program and Outstanding Achievement in Directing. Below, Argo shares some thoughts on the making of Chimpanzees: An Unnatural History.

Q: How did the idea for Chimpanzees: An Unnatural History come about?

A: The idea grew out of a prior film that I had made for NATURE called Wisdom of the Wild. One of the segments in that film dealt with chimpanzees being retired from a laboratory, but it was just the tip of the iceberg. Both Fred Kaufman [NATURE’s executive producer] and I were very moved by the story of chimps that have been used in research and entertainment, and we realized it was a really rich and complex story. The contrast between chimpanzees in the wild using medicinal plants to self-medicate, as we showed in Wisdom of the Wild, and then living in a very unnatural situation was very dramatic.

I should say too that especially now, after having immersed myself for over two years in the world of captive chimpanzees, it is so moving to think back on my experiences of seeing chimps in the wild in Tanzania. It gave me such a sense of well-being to witness them living in family groups. I’ll never forget watching them on numerous afternoons, just lying in a little patch of sun on the forest floor, having a big group of adults and youngsters groom and watching them forage. They seemed very much at peace. And that was, again, such a contrast to what we’ve done with chimpanzees in our society

Q: You are the writer, director, producer and narrator of the film. Why did you choose to assume all those roles?

A: It’s a very personal choice that I participate in so many facets of the film. It’s a much richer, deeper experience for me. It gives me huge gratification. I love writing the script and I love reading the words that I’ve written. At the end of making the film, it’s very cathartic. I usually have a big cry. And yes, there are huge challenges also. It’s very lonely in some ways. But also one of the things that I absolutely love about documentary filmmaking is that we work as a team. It’s really one big creative effort. I really rely on the people that I work with – the wonderful cinematographers, my associate producer who is just the best researcher in the world. And of course the NATURE team. I have gotten such amazing support from them.

Q: Chimpanzees is a very poignant film, and also presents a strong point of view. Do you think a documentary should seek to sway public opinion, and is that something you aim for with your films?

A: What I sought to do with this film is to provoke thought, and encourage people to ask more questions, instead of just accept the status quo. If any documentary filmmaker is to be completely honest, everything’s subjective because you choose when to roll the camera, for example, and when to stop the camera. You choose where to point the lens. You choose which locations to go to. So it never can be completely objective, though we all want to be as objective as we can as documentary filmmakers.

My mantra throughout the whole film was “just the facts.” Just the facts, and don’t comment on it. Don’t say, “And isn’t this sad, or isn’t this terrible.” Because I think it’s more respectful of the audience if you can present the stories and just say, “You decide for yourself.” For example, I don’t say, “And Billy Jo [a chimpanzee] was tortured in the laboratory.” I never say something like that. But Gloria goes through his records. “Punch biopsy.” “Bone marrow transplant.” And you can decide if you think that that would be a positive or a negative experience for a chimpanzee. So I tried really hard not to comment emotionally, but I can’t hide the fact that in general I think we have treated chimpanzees very poorly in our society.

Q: Were you surprised by anything during the making of the film?

A: Definitely. I was amazed by how truly communicative chimpanzees are. Obviously with one another they’re extremely communicative. But what I mean is how easy it is for human beings, if you just open yourself a little bit, to communicate with them, and how they can so easily communicate with us. I guess it’s because we share so much genetic material, but also I think it’s a certain similar kind of intelligence that we share.

A: Up at Fauna Foundation [outside Montreal], a female chimpanzee named Pepper was grooming my arm and she clearly wanted me to take my watch off because it was in the way. So I took my watch off and she had it so fast! It was in the cage, and I thought, “Oh well, that’s the end of the watch. I really liked that watch, too.” She grasped it in her foot, since they can use their feet like hands. So she held it in her foot and groomed me for about 10 minutes. And then when she was finished, she very gently took it out of her foot and handed it out to me. And I was just amazed. It was so considerate, sensitive. She understood that it was something that was mine, something that I liked.

Q: Did you have trouble getting people from the government to talk on camera for the film?

A: Yes. I tried to call a higher-up person at the NIH who deals with chimpanzee issues, and I was immediately blocked and sent to the P.R. department. I just wanted to get his point of view, to start there. But I was told “No, you have to go through us.” So I sent in some of my films and told them what the film was about. And about a month later, they basically said, “Sorry, we’re just too busy right now. No one can talk to you.” We also contacted all of the laboratories that are still actively using chimpanzees and were told that we couldn’t film within the labs. We’d then ask, “Can we interview one of your scientists?” And they all said no.

Q: Do you think the film suffered at all for their absence, or did you consciously try and make up for it in other ways?

A: It’s a good question. I was really upset that I wouldn’t have that balance. But then I realized, I’m making a documentary and that’s the reality of it. That is the balance. I couldn’t speak for them myself. We were allowed no information, and that became a statement in itself. I did present that there is an ongoing debate about the use of chimpanzees, and we hear from scientists on both sides of the fence.

Equus "Story of the Horse" | Episode 2: Chasing the Wind
My Congo
Dolphins: Spy in the Pod | Part 2
Voyage of the Lonely Turtle
Hippos: Africa's River Giants
The Last Orangutan Eden