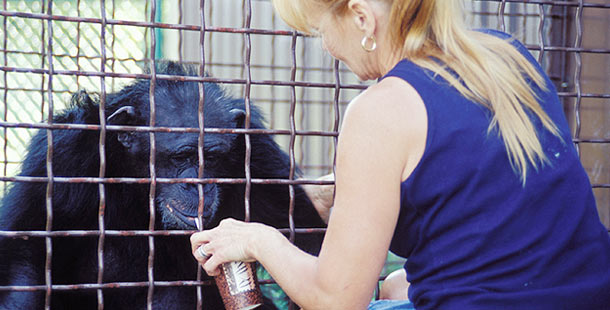 Q: Why did you decide to take in all of those chimps at once?

A: I didn’t have a choice. The day that I went to the lab and met the chimps, I decided I would be taking whomever I met. I was introduced to two groups of chimps — 15 in total, 7 of which were infected with HIV. There was no way I was going to discriminate. I met the chimps and I decided that, even if they were HIV positive, it didn’t matter. It wasn’t even a question in my mind. We would overcome the obstacles.

Q: What safety precautions are necessary when working with chimps that have HIV?

A: We did everything we needed to do in terms of learning about HIV. We had healthcare workers come in to educate our staff about working with the chimps. And we knew that the two primary methods for contracting the disease were intercourse and exchange of needles. But we are at the same risk as doctors, police officers, and healthcare workers– we’re not really at a greater risk. Plus, we knew who had the virus. The chimps had been labeled and they were behind bars.

Q: Are chimps your favorite animal?

A: Actually no. Pigs are probably my favorite animals. Probably because you have to show pigs a reason to listen to you. You have to wait until they’re ready. When I think about it, that’s probably why I work so well with chimps-you have to have patience. But I always loved chimps. And certainly my passion through life has been helping animals. So with this general passion for helping animals, it was just logical for me to do what I could to help the chimps. I always say that if you’re going to find something to do with your life, do something you’re passionate about. And though I certainly never thought I’d have chimps living on my property, meeting the chimps has been the most incredible experience in my life

Q: Is it hard to face the previous owners, the people who sold the chimps to research?

A: I do have a conflict with that. Initially, I didn’t want to have anything to do with the previous owners-or the lab workers and entertainment people. But then I had to see both sides. The humans were extremely traumatized also. They watched the chimps suffer. They gave them up. They suffered a lot. Also, I needed those people to learn about the chimps. To hear their history.

Q: What was it like when they first moved in?

A: For the first three years after the chimps first moved in, it was pretty terrifying and very dramatic — pretty much every day. There would always be an aggressive act, an attempt made on a body part all the time. Which is understandable given their history. Just being captive when you don’t deserve to be is traumatic enough. I liken them to maximum-security inmates or patients in a mental hospital. Like prisoners, they misbehave to get attention. It’s the only way they can have control. Or like juvenile delinquents, they act out all the time. But as the years pass, there’s some sort of healing.

Q: Why is it so important for them to have islands?

But the islands are a place with no bars over their heads. They can come out, surrounded by water and look up at the sky without any obstruction. There’s a vegetable garden on one of the islands. One of the females, Pepper, likes to pick her own veggies. She’ll take her blanket with her and camp out on the island at night. She likes the quiet, away from the rest of the group. Just a chance to go out onto their islands, has changed their personalities a lot.

Plus, they just love it– even in the winter. Actually they love the snow. They are very conditioned to our weather. We put maple syrup on the snow and they eat it like kids do. They love icicles and snowmen. And it’s pretty funny to see them smashing snowmen down.

Q: Could you share some of your most memorable moments?

A: Wow. I’ve had a memorable moment with everybody who’s here. There’s always that crucial moment when you know you’ll never be the same again. Take Tom, who climbed the tree in the end of the show. I’ve fallen in love with Tommy again. He never paid attention to me before. He loves chimps. He loves males. All of Tom’s life here, he had male caretakers. Pat was his main person. But Pat doesn’t work here anymore so Tommy has had to get used to me. And at 40 years old, he’s not a young guy. You’d think after 9 years, there wouldn’t be anything that changes the relationship. But it does. With Tommy, I could almost always cry, laugh and be incredibly depressed or really happy. They’re pretty powerful in that respect.

Q: Any plans for more chimps?

A: No. Fifteen is nothing but, at the time, it was a lot. Now my purpose and goal is to help people understand what the lives of these chimps are like. We have a whole family and staff- we have a lot of really close family that come in. A lot of people that (the chimps) can go to for help. Some chimps are attached to me or my sister. All (of the chimps) have people they really love a lot… it’s a good idea (for them) to have some sort of relationship, especially intimate ones.

Q: The film focuses mainly on chimps used in biomedical research, but what about chimps used as pets or entertainment?

A: Gosh, there are just so many reasons but the minute you take a chimp away from its mom, you’ve affected its personality. Anytime you take a chimp to be raised for entertainment or used as pets, you’ve changed its chances of being a chimp. At 7 years old, these animals are expensive, strong and dangerous. And that’s usually when the owner realizes they can’t handle them-and sells them for research. So the chimp’s life is over but they’re going to live another 30 years.

Some would say entertainment is worse than research. Mainly because what people don’t see is that “training chimps” for entertainment usually means beating them or yelling at them. The physical abuse of research is not even as bad as entertainment. They’re punching 20-30 pound babies in the head and the back. Yelling at them. Keeping them in fear. They pull all of their teeth out so they don’t bite. And there’s no reason for it. It’s totally unnecessary. Also, we’re probably not going to convince people too quickly to stop research but entertainment is a waste of life.

Q: Do you have a message for viewers moved by the film?

A: I’d like people to know that anybody can do something. Rescue a dog or a cat, learn about wetlands. I hope people get inspired to do something they care about. And it can be challenging and depressing but just physically being with the chimps is motivating. And you have to be happy. You can’t be depressed. Because they pick up on that and your mood can affect their mood. If you see someone in a cage that you rescued, you care for them with love. You see them go into a nice clean room, open a packet of toys, get their favorite food, that’s what you do it for. It’s the little rewards.