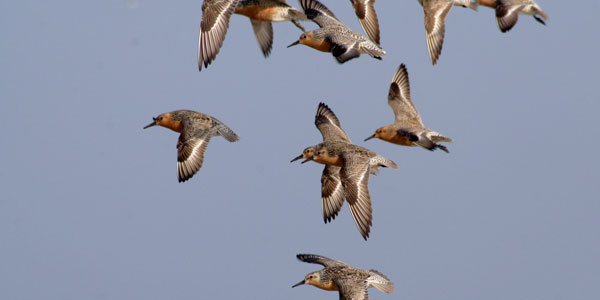 Larry Niles’s working life has been spent conserving wildlife as a biologist for government agencies, academic institutions and non profit conservation groups. His career began as a regional game biologist in Georgia where he led projects on white tailed deer population management and studies of black bears in the Okeefenochee Swamp. In 1982 Niles joined the NJ Endangered Species Program. Over the next 25 years he spearheaded research and management projects on shorebirds, colonial water birds, migrate songbirds and raptors and directed work on many other bird, reptile and invertebrate species. He is featured in Nature’s Crash: A Tale of Two Species.

Well, I believe we did the film in 2008. In both 2009 and 2010 the population remained stable in Bahia Lomas, that’s the main wintering area for red knots and in a few other wintering areas in South America. In the U.S. the numbers more or less remained stable. So we were hopeful that it had bottomed out. With species like this it takes a long time to recover because they are a low-productivity species, so once they get down to a certain level it takes decades for the population to get back to where it was. We knew that the recovery would be slow.

But this year, 2011, in Tierra del Fuego the number of birds went from 16,000 down to 11,000. They had a similar decline in an aerial count done two weeks earlier in the exact same area. Two surveys verify that there were less birds in Bahia Lomas. The Aircraft survey went down to Argentina in Rio Grande and found 400 in a place where there were 800 last year. In the year 2000, we counted 56,000 red knots in these two places. And now, based on the aerial count, we have less than 10,000. And what’s even more alarming is we had at least a 5,000 bird decrease in one year. We don’t know exactly what that means yet. It’s bad for sure.

The first question is, Did the birds move somewhere else? We covered all of Tierra del Fuego but we didn’t cover the area north of the Strait of Magellan because those places had blanked out years ago. We didn’t see the need to survey them. Next year we will expand the area of our survey. But another way for us to check this to see if it was an actual decline in numbers or if the birds have just moved around is back in Delaware Bay. The counts in Delaware Bay trend the same. We’re going to wait and see what happens in Delaware Bay.

We saw a lot of juveniles in the flock, and that’s a good thing. It means that birds left Delaware Bay in good condition, got to the Arctic, and the Arctic was reasonably hospitable for breeding. But it’s alarming because, in normal years we don’t have many juveniles. So if you were compare the numbers from this year to last year and just looking at adult red knots, the drop would’ve been much more. The count this year was inflated a bit by the production of juveniles.

So this is a very uncertain situation. If you have a loss of 5,000 birds when a population is 100,000 then it’s significant but it’s not going to determine the fate of the population. But when you have 16,000 and you lose 5,000 then that’s a very significant thing. It’s not likely that this decline is related to Delaware Bay because it’s so dramatic. But the collapse of Delaware Bay brought the population down to this low level. Now natural forces could wipe it out.

So the collapse of Delaware Bay might have started off this trend of decline but now there are other factors at play that are affecting populations?

Yes, we think that the main affect of the collapse of Delaware Bay as a stopover was the poor production of juveniles. Ideally, birds leave Delaware Bay for the Arctic, breed and produce a crop of juveniles. But because birds were leaving Delaware Bay in poor condition due to the lack of crab eggs, they reached the Arctic and either didn’t breed or bred unsuccessfully. So as adults died they weren’t being replaced by juveniles and the population went down.

The other impact of Delaware Bay is that if birds leave Delaware Bay in poor condition and hit bad conditions on the way to the Arctic or in the Arctic the adults may die before getting a chance to breed. If Delaware Bay was doing what it should be those birds would have lots of fat and they could live off that fat until conditions improve. But if they don’t have that fat, it’s like being in the Arctic without a winter coat.

When you bring a population of animals down to a low level, you still have all the other natural influences. One of the natural influences would be the hurricanes and tropical storms coming through the Atlantic and Caribbean when the birds are going south. These may be increasing because of climate change, but they’ve always been a problem. A red knot might spend up to 4-5 days over ocean before it hits land. If it encounters a storm and is blown off course it may not make it. Say this happens and 5,000 birds are killed in a season. If there are 100,000 birds, that’s 5 percent of the population. But if you have a lower number, 25,000 birds, now it’s 20 percent of the population. If it’s 15,000, then that’s a third.

It’s hard to say what’s happening in the Arctic. Our group of knots breed mostly in the Archipeligo islands in Canada just above the Arctic circle. The habitat is of a higher elevation and barer because of that. It’s around 75 percent snow-covered. There’s a reason for that because they’re trying to nest in areas that have a very low predation rate. If climate change generally warms things, then I don’t know what their new strategy would be. Would they go to a higher altitude? Would they go to more northern islands? We don’t know enough about the effect of climate change in breeding areas.

But in temperate and tropic areas I think it can have a significant impact. We tracked a bird last year with a geo-locator, a device that stores information, that encountered a tropical storm on its way south and flew over 1,000 miles off course out to sea. It was lucky enough to make it back and successfully land in the northern coast of Brazil. But birds are physiology planning on a flight to Brazil. They aren’t planning on a 1000 mile detour.

Have the horseshoe crabs had a similar decline recently?

The major decline took place during the 90s and the early 2000s. Then they bottomed out in 2003. But in the last few years, the surveys have been in conflict. Some surveys suggest there have been an increase in the number of eggs on the beach, some are showing no increase. There has been an increase in the number of juveniles. I think it has gotten better but I don’t think there is significant statistical basis for that.

Another way of looking at it, when we make our catches of shorebirds each year we compare the percent of birds that make 180 grams because 180 grams is more or less the threshold weight that we estimate birds need to successfully breed in the Arctic. Back in 1998, 80 percent of the birds that we caught at the end of the season were over 180 grams. In the worst of it we were getting 5 percent of birds making it to 180 grams. Last year it was 40 percent. So that’s an improvement. But it’s an improvement with a population that’s a quarter of the size that it once was. So naturally you need less eggs because you have fewer birds.

What can people do in order to stabilize and improve the populations at red knots?

Well, I think there’s two things. First, we should really not be harvesting crabs until there’s clear signs of improvement. There are still 400,00 crabs killed each year for bait. One thing people could do is keep the pressure on their legislatures, especially the people in New Jersey, Pennsylvania, Delaware, Maryland and Virginia.

The second thing is that people need to become more aware of the situation of shore birds. We’re talking about the red knot but we now have evidence that sandpipers and even common species like lesser yellowlegs have declined by 80-90 percent in the last 20 years. So what we are looking at with red knots is a serious decline but all the arctic nesting shore birds are in trouble.

In the 1930s, when water fowl were in trouble, the sportsmen started programs, duck stamps, paying taxes on their guns and ammunition — they did things that ultimately led to the restoration of water fowl populations. I would say, people who like birds need to start doing something. It’s not just governments or conservation groups. If the hunters had left it up to governments and groups then we probably wouldn’t have any water fowl species right now. But they didn’t. They took control. And I think now is the time for people who like birds to start doing something, start demanding that they tax binoculars and put that money into programs, or demand that there is a shore bird stamp and the money raised would go toward restoration programs. I think there is need for serious action now.

Horseshoe Crab Anatomy
Crash: A Tale of Two Species
Filmmaker Allison Argo on the State of the Birds Report – “This Is Why I Make Films”
The Debate
The Benefits of Blue Blood
Why save the red knot?
Additional Web and Print Resources