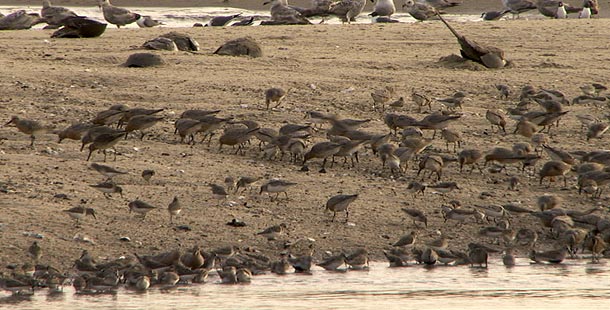 It may sound strange, but the U.S. State of the Birds press release filled me with a sense of relief.  The report, released on March 20 by Secretary of the Interior Ken Salazar, reveals that one-third of our nation’s birds are endangered, threatened or in serious decline.  This “breaking news” is something many of us have known for years – but it went unreported by the prior administration.  Now, at last, the word is out.

The fact is, birds face a very grim reality and there is no time to waste.  We must do everything we can to turn the situation around – and that means ALL of us. Find some ideas for getting involved at the State of the Birds Web site.

My recent film for NATURE, Crash: A Tale of Two Species, told the story of a small bird called the “red knot.”  No bigger than a robin, the red knot makes one of the longest migrations on earth – from the tip of South America to the Arctic(!).  But today these migratory marvels are hanging on by their little toenails… and it’s all because of human activities.

The exciting part of the State of the Birds report is that it offers hope.  It reports that where efforts have been made, there have been tangible improvements.

This is why I make films.  To bring these life-altering issues to the public – and in doing so, to bring a bit of hope.  Only if we’re aware of the problems will we be able to fix them.

My latest film, Frogs: The Thin Green Line, delivers no less urgent news than the bird report.  Up to one-half of the world’s amphibian species are threatened with extinction.  It’s being called the greatest mass extinction since the dinosaurs.  It is HUGE… but there is much that the average citizen can do to stem the tide.  As always, the first step is awareness – and that’s where NATURE comes in.

Yup, this is why I make films.  I hope you’ll tune in!

Frogs: The Thin Green Line is scheduled to premiere on NATURE on Sunday, April 5, on PBS (check local listings).

Crash: A Tale of Two Species is scheduled to air on NATURE on Sunday, April 26, on PBS (check local listings). Watch it online now.

Interview with Larry Niles (March 2011)
Horseshoe Crab Anatomy
Crash: A Tale of Two Species
The Debate
The Benefits of Blue Blood
Why save the red knot?
Additional Web and Print Resources