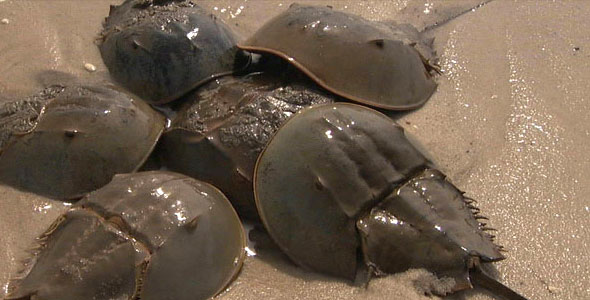 The horseshoe crab is at the center of a contentious debate, and one that plays the world over. How do we find the balance between man and nature?

In the Delaware Bay, the clash over horseshoe crabs has embroiled experts, agencies and people in a heated debate that pits the survival of the red knot against the livelihood of fisherman and the U.S. pharmaceutical industry.

And, in order to find a solution, The Audubon Society, the Atlantic States Marine Fisheries Commission, the New Jersey Department of Environmental Protection, the U.S. Fish and Wildlife Service, conservationists and long-time bay watermen are all looking for one thing, an answer to how many horseshoe crabs there are – and how many there need to be to maintain the ecological balance of the bay if the red knot is to have any hope of survival.

Little is known about the status of the horseshoe crab population. Because their population has only been studied recently, there is limited data which makes it difficult to assess its status. What is known is that prior to 1998, millions of horseshoe crabs were taken from the Delaware Bay in an unregulated fishery. But now, attention is being paid.

Dr. Smith believes these gains are most probably in response to direct action taken by the fisheries commission because of declining migratory shorebird populations. In 2000, the Atlantic States Marine Fisheries Commission (ASMFC) established state-by-state quotas in all Atlantic states for crabs harvested for bait, limiting the number of horseshoe crabs that could be harvested. And, in 2006, the ASMFC further reduced the number of horseshoe crabs that could be caught in Delaware and New Jersey to 150,000 per year and added additional protection in Maryland and Virginia to increase horseshoe crab abundance in and around the Delaware Bay.

Another crucial step was the establishment of a no-harvest zone (the Carl Shuster Reserve) in the ocean off the mouth of the Delaware Bay. The aim of the no-harvest zone is to protect older juvenile and newly mature female horseshoe crabs from being harvested, allowing them to reach sexual maturity and begin reproducing. Dr. Smith believes that the current management program, which allows only male horseshoe crabs to be caught and taken, will allow for a growth in the population of horseshoe crabs in the bay. Recent monitoring data shows that the number of spawning males has continued to increase significantly in the bay, even with the male-only harvest restrictions in place.

Monitoring programs are in place that will detect important declines in male to female ratios if fisheries managers decide to continue with the current management strategy.

But, according to Dr. Smith, it is important to understand that the harvesting of horseshoe crabs is not the only thing that is keeping their population from growing. Whether the horseshoe crab can ever return in their former numbers is uncertain. They are being threatened by other factors – consequences of climate change and habitat loss loom large on the horizon.

Censusing horseshoe crabs is an imprecise science, and interpretation of survey results may vary. Dr. Larry Niles, Chief Biologist, Conserve Wildlife Foundation, acknowledges the important efforts made by the ASMFC in the past ten years and the possibility that the horseshoe crab population may be increasing. However, Dr Niles believes this improvement, if not a temporary up tick in numbers, is not matched by other surveys done on the Delaware Bay shore where shorebirds are feeding.

Over the six year history of the spawning survey, Niles states there has been no improvement in the number of spawning females. More importantly, surveys of horseshoe crab eggs in New Jersey and Delaware, the food on which the red knots depend, have also shown no sign of improvement in population numbers. In 2007, New Jersey counts of the number of horseshoe crab eggs were the lowest in the history of the survey.

Shorebird biologists found a corresponding 30 percent decline in red knot numbers in 2007 compared to two years ago. Dr. Niles believes it is vital that there are no more losses to the red knot population associated with inadequate availability of horseshoe crab eggs on the Delaware Bay and will continue to argue for further harvest restrictions to assure increases in breeding female horseshoe crabs and their eggs so vital to the red knot.

And yet, it still may be too late for the red knot. Published population models of the red knot indicated that the bird will be at or near extinction in 2010 – just two years from now. Since horseshoe crabs take 10 years to reach sexual maturity, even the restrictions in place now may not be enough to increase this vital food supply for the red knots and ensure their survival.

But, it is not only the survival of the red knot that is at stake. Like the proverbial canary in the coal mine, the red knots’ decline and potential extinction is a warning sign of larger consequences and danger to come. If steps are not taken to protect our unique ecosystems and wildlife, they may disappear forever.

SHARE
STREAM WITH PASSPORT
Crash: A Tale of Two Species

Interview with Larry Niles (March 2011)
Horseshoe Crab Anatomy
Full Episode | Crash: A Tale of Two Species
Filmmaker Allison Argo on the State of the Birds Report – “This Is Why I Make Films”
The Benefits of Blue Blood
Why save the red knot?
Additional Web and Print Resources