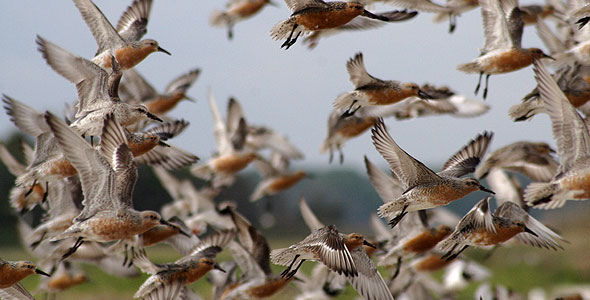 Among flocks of shorebirds, the red knot is fairly average looking. In fact, only the most practiced bird watchers may be able to distinguish this medium-sized, plump peep from the thousands of other shorebirds playing tag with the waves. Yet, somehow the red knot has caught the attention of people around the world.

The knot’s dependence on the eggs of the heavily harvested horseshoe crab has placed it at odds with another species — humans. Conservation groups, lawmakers, fishermen, scientists, and ordinary citizens have all entered the debate. But even as our actions have imperiled the red knot, we can also preserve the species, by regulating the fishing industry and keeping clear of the beaches that the knots rely on during migration. Where nature ranks in our system of values will dictate how far we are willing to go to protect the red knot.

There are millions of shorebirds in the world. Why all the clamor over the red knot? How could this small bird stir up so much controversy and inspire such extraordinary efforts on its behalf? To begin to answer these difficult questions we must first become familiar with the red knot.

The red knot may blend in with the other small shorebirds, but it makes a journey that certainly sets it apart. A master of long-distance aviation, the red knot makes one of the longest migratory trips of any bird — 9,300 miles along the Atlantic flyway from its wintering grounds in southern South America to its high Arctic breeding grounds. The journey is so exhausting, it requires two to three stopovers for refueling. The horseshoe crab egg feast they will consume at Delaware Bay, is not just an indulgence — it’s absolutely crucial for the birds’ survival. When the knots arrive at Delaware Bay, their bodies are half their starting weight, devoid of fat and even some muscle. Here, the red knot will take about two weeks to double its weight so it can continue its migration.

The migratory trip is far from the only risk the peeps take in their lives. The life of the red knot is fraught with challenges. In their wintering grounds of Tierra del Fuego, blinding gales blow up without warning, and tides surge 25 and 35 feet every 12 hours. The challenges facing the knots are even greater on the Arctic nesting grounds, where a declining population of birds makes it more difficult to find a mate and even if they do, a snowstorm can wipe out the knots’ eggs. If the birds don’t consume enough eggs during their migratory stopover, they may not have enough fuel to complete their trip, and those undernourished knots that do make it to the Arctic will arrive weak and emaciated. Add the fierce and unpredictable Arctic weather into the mix, and the birds are likely to be in such a state that it is nearly impossible for them to raise chicks.

Nature, it seems, has really stacked the deck against this creature. During its migration, the red knot concentrates in huge, densely-packed flocks. These enormous gatherings make the knots vulnerable to habitat destruction and, in South America, hunting pressure. Sadly, it is not just their eating preferences but their social patterns that put them at odds with human activities.

All of these hardships have given rise to dire statistics. The red knot is a creature in peril. The U.S. Shorebird Conservation Plan lists the red knot as a “Species of High Concern,” based on declining population trends and threats on non-breeding grounds. In the last 20 years red knots have declined from over 100,000 to less than 15,000. And in 2006, the knot was named a candidate for Endangered Species Act protection as an emergency measure to slow the rapid fall of its population. In the Delaware Bay, the knot has suffered a decline so severe that some experts predict the population stopping over at the bay could disappear within five years.

Studies conducted outside of the U.S. do not paint a brighter picture. Counts of knot populations wintering in South America dropped over 50% from the mid-1980s to 2003. Researchers have suggested that the continued hunting of knots in South America might be partly to blame.

The red knot is one of the world’s most amazing birds. But if that is not sufficient motivation for us to save it, there are other incentives. Chincoteague, Virginia, a popular stop-over for the red knot, finds that what is good for migratory shorebirds is also good for Virginia business. A recent tourism survey found that birders and ecotourists were bringing in significant amounts of resources to the local economy. And one economic study in South Jersey found that the shorebird-watching industry generated nearly $36 million dollars in revenue for the area.

Sadly, the issue raised in Crash: A Tale of Two Species over the increased harvest of horseshoe crabs remains contentious today. Whether the red knot will be able to continue to use Delaware Bay as a major migratory staging area in the future is still up in the air — as is the fate of the knot.

For more information on red knot conservation efforts, visit http://shorebirdproject.blogspot.com/, where Larry Niles (featured in Crash: A Tale of Two Species) and an international team of scientists blog about the most recent news on the red knot.

Interview with Larry Niles (March 2011)
Horseshoe Crab Anatomy
Crash: A Tale of Two Species
Filmmaker Allison Argo on the State of the Birds Report – “This Is Why I Make Films”
The Debate
The Benefits of Blue Blood
Additional Web and Print Resources